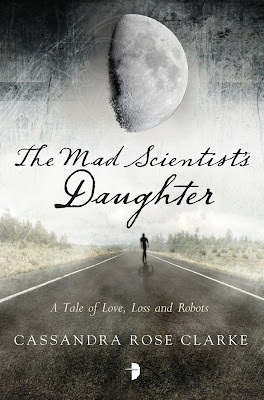 It’s only the beginning of February and we’ve already reached my first DNF (Did Not Finish) novel of 2013. And this one was a heartbreaker, since everything I’d heard about this book was that it was a totally stellar, if tragic read. I was prepared to be wowed, and ended up more than disappointed.

The usual caveat is employed here folks. Since I didn’t read the whole book, this is NOT a review, just thoughts on the portions I DID read of the novel and why I chose to put it down.

THE MAD SCIENTIST’S DAUGHTER by Cassandra Rose Clarke. Here is the synopsis which hooked me:

There’s never been anyone - or anything - quite like Finn.

He looks, and acts human, though he has no desire to be. He was programmed to assist his owners, and performs his duties to perfection. A billion-dollar construct, his primary task is to tutor Cat.

When the government grants rights to the ever-increasing robot population, however, Finn struggles to find his place in the world.

So I read roughly 40% of the book on my Kindle before putting it down. A few things to start with. This book is not YA…at least I don’t think it’s meant to be YA…but that doesn’t stop Clarke from writing it like YA with jarring Adult moments that jump you right out of the story. Some truly incongruous swearing (I have no issues with swearing, but when it's applied in this novel it's totally out of place and occurs at the strangest moments),  a protagonist (Cat) who, though she ages throughout the narrative, always seems to act like a petulant, uninformed teenager (at least as far as I got). Other than Cat and Finn the rest of the characters are cardboard cutouts at best. Her mother and father basically have the blinking word “parent” hanging off them and not much else. You can sense Clarke attempting to make the father sympathetic, and the mother stern…but both those attempts just kind of float by with no real digging into such character growth. For her part Cat is about as unlikable a protagonist as I’ve come across since I started the blog. Like I said, she never acts like anything more than an angsty, melodramatic teenager. Following her around was…off-putting to say the least. I've heard tell she doesn't improve either, though I can't be sure since I didn't reach the end. Finn is…interesting, but he’s not really all that realistic as AI and to be honest I think the idea of the sentient doll (which this story is trying to be) has been done by other author’s in much more realistic, interesting, and believable ways. That's not to say that Clarke doesn't put effort forth. She certainly tries, but I feel she kind of missed what it might be to be AI, and how such a being might interact with a human.

The setting also bothers the heck out of me. This is supposedly a future, post-disaster earth where to pick up the pieces afterward these disasters, robots, or automata were employed to help rebuild. But then those robots were left to wane and while there used to be many, there are far less of them and most now sit dusty in old electronic shops…and thus Finn is a miracle of wonder who looks human but is a machine and is apparently SO special that people come from miles around to study him. I assume this is because these humans don't associate Finn with his automata predecessors...but that seems incongruous since he works much the same with simple programs dictating his behavior...and so perhaps the newness to these studiers is that he looks human? I honestly don't know.  The cities and even the country towns seemingly still depend heavily on technology…houses are smart houses with main computer systems, and people use tablets to read, write and do everything else. There are still traffic jams and multiple shops and businesses operating. But for some reason they stopped using robots?

Wait, let me write that again.

Humankind developed robots to rebuild. And then abandoned them once things were rebuilt.

Okay so we made a breakthrough in Artificial Intelligence so that we had worker robots…and the various world governments…all of them…just abandoned them to become dusty relics.

Calling that unbelievable as a setting is an understatement.

On top of that, the most interesting part of the story for me would be humans and robots (or AI) interacting and the politicking that goes on in such a relationship. And if we forget the above anomaly, then Finn is seemingly the perfect being with which to explore such a facet. Awesome! Let’s do that. The back cover implies that’s part of what we are getting.

Eh…not really. It gives a LITTLE time to that, but not enough to keep my interest. Instead we get a story mostly concerned with an ill-behaved girl and her “love” for Finn, a machine. Which could be interesting, if it wasn’t treated as a typical Human + *insert supernatural or otherwise ill-matched love interest here*.

I guess the bottom line is that I’ve seen this story done before, and done far better. Where it should concentrate largely on the connection a human and a machine would have, how others perceive such a relationship, and perhaps the ideals of what makes humans “human” in contrast to what makes a machine a “machine”. Instead we get scads of melodrama written in a YA format without an eye towards dealing with those topics. Sure we get smatterings of that topic, but it always feel like an afterthought that Clarke felt the need to address briefly.

Perhaps I’m spoiled by such phenomenal novels about this topic such as THE STORIES OF IBIS by Hiroshi Yamamoto which made me totally change my perception of a world in which AI interacts with humans. But even that had love and friendship stories between humans handled in a solid, and interesting way. I think the one thing I will take away from this novel is that when telling a story like this, attention needs to be paid to MORE than just that relationship to make it work. In this novel, as far as I got, it didn’t work. It uses Finn as a plot point, a toaster (Battlestar reference intended), instead of a character proper.

It could just be me though, and perhaps you might find this novel is really great. I sadly, did not.
Posted by GunMetalBlue at 6:48 AM