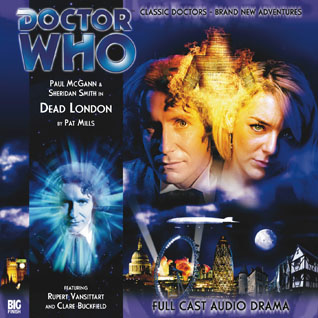 The 2nd Series opener for the Eighth Doctor Adventures is a bit of a gamble. We start things off in DEAD LONDON with the Doctor and Lucie Miller separated. Considering how solid their bond was by the end of Series 1, it's quite a bold choice to begin the second Series this way, but it pays off as far as I am concerned. It only pays off though because the story is such a clever spat of time shifting.

Basically this episode drops our TARDIS team into a very strange London where a parking violation in 2008 can earn you a hanging in the 1800's. Time is seemingly shifting around both Lucie and the Doctor, and there are only a few connecting threads that allow the two to sniff out the trail of what is going on. The Doctor, charged with parking the TARDIS in the wrong place, links up with a fellow lawbreaker in Victorian London named Spring-Heeled Sophie. The two eventually find Lucie and attempt to sort out what exactly is going on and why the Judge in one time looks like the chief of police in another time who looks like a hangman in another time. In any other tale it might seem convoluted, but in DOCTOR WHO it's par for the course for our intrepid Time Lord.

The best bit about this opener is the rivalry between Sophie and Lucie. It's only slightly there as Lucie is too proud to actually comment on it aloud (ala Rose Tyler), and instead just tries her very best to trump Sophie in the companion category at every chance. It's incredibly fun to watch as Lucie really does trump Sophie for me...Sophie is interesting, but she just can't match the sassy, strong nature of our companion.

The story in DEAD LONDON is a great little diddy. It's interesting without being over the top. It's got different timelines, scattered characters, and crazy alien connotations. Great voice acting form the guest stars, and a really, solid opener to the series. Is it great exercise in Doctor / Companion relationship and it is really just a good DOCTOR WHO story at the end of things.

There's not much more to say. It's not as good as some of the previous stories in the range, but it certainly is a cool, irreverent choice as an opener for the 2nd Series and for that I applaud Big Finish.

NEXT TIME: Stay tuned for one of the most fun DW Audio Drama's in the EDA range, MAX WARP!
Posted by GunMetalBlue at 7:54 PM