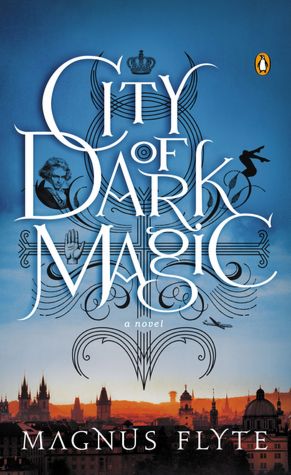 Once a city of enormous wealth and culture, Prague was home to emperors, alchemists, astronomers, and, as it’s whispered, hell portals. When music student Sarah Weston lands a summer job at Prague Castle cataloging Beethoven’s manuscripts, she has no idea how dangerous her life is about to become. Prague is a threshold, Sarah is warned, and it is steeped in blood.
Soon after Sarah arrives, strange things begin to happen. She learns that her mentor, who was working at the castle, may not have committed suicide after all. Could his cryptic notes be warnings? As Sarah parses his clues about Beethoven’s “Immortal Beloved,” she manages to get arrested, to have tantric sex in a public fountain, and to discover a time-warping drug. She also catches the attention of a four-hundred-year-old dwarf, the handsome Prince Max, and a powerful U.S. senator with secrets she will do anything to hide.

I do believe there is only one other DNF (Did Not Finish) “review” on here, so it’s not often I don’t finish a book. It has to be extraordinarily bad or boring to make me put it down without intention of giving it any further chance.

CITY OF DARK MAGIC by Magnus Flyte (pseudonym for Meg Howrey and Christina Lynch) is one of those novels. And to be honest I'm kind of glad I began reading it in 2012, so I don't have to say it's the 1st book I read in 2013.

It had a significant amount of buzz surrounding it, a lovely looking cover, a compelling synopsis on the back cover, and a blurb on the cover by funnyman Conan O’Brien (who called it “madcap”). It SEEMED like a win.

In this case, the marketing dept. should be sat down in the boardroom and congratulated on swindling the random reader into reading this vacuous crapola.

It actually started decently enough. An interesting premise, a somewhat compelling protagonist, some bizarre characters and a few mysteries…and lastly a city that, for all intents and purposes, is still relatively medieval. That was the first 50 pages-ish. After that things go downhill fast. I’m not going to write long diatribes about the badness, but I’ll give you a point form list.

- Protag (Sarah Weston) is a Beethoven and music scholar (top of her class) who apparently finds all other history boring. So much so that anytime anyone else talks about their area of history while exporing Prague…Sarah drifts off and talks about how bored she is. Riiiiiight. That’s plausible. If someone is into Music History, one imagines they wouldn't be ANNOYED by history.

- Sarah is a very sexual creature. In fact, she’s not about sex as an act as anything other than stress relief to help her think. No seriously, She will talk about how her mind is so foggy and that if she’s too horny she can’t think straight. Cue random bathroom/religious statue “bent over” sex with quasi-stranger. Ah! That’s better. Riiiiight. Let me be clear I don’t mind sex scenes at all, when they have a purpose. But here they are used in a totally out of the blue, random manner with zero relevance to the plot. And it happens OFTEN.

- My, but these characters are beige. The duo of authors introduce no less than 10 other researchers in Prague, and not ONE of them is memorable. Even the Texan weapons expert is a bleeding caricature/stereotype. They all traipse around saying things, none of it all that important, and attempt only to move the plot forward.


- The villain is LAUGHABLE. Like not quietly reserved in her goals as a villain should be. Not menacing. Not scary. Just an out and out evil 60's Bond villain archetype (without the charm of one). Pitiful.

- Beethoven. Hmmm, the first 50 or so pages were treating the composer like he’s a huge part of the plot. He is and he isn’t He’s forgotten for long sections and then the spotlight will spin back to him. It’s…scatterbrained.

- History is a second class citizen in this book. The author’s spent some time on Wikipedia for names, dates, and small portions of text about historical events…but it is largely un-researched and is then spouted by characters who A. Don’t seem to care much, and B. Don’t really know what the hell they are talking about.

- Prague. From what I hear it’s a beautiful city, but you wouldn’t know it form this book. It’s all about dropping names of places, and nothing really about description. You NEVER feel like you’re in Prague. You could be in any number of old world cities from the lack of description. Hell, even the castle where the majority of events take place is never really described in any detail.

- Old Toenails are chewed to induce time travel of a sort. No, seriously. I don’t even…*shakes head*

The book I kept comparing this one to in my head was Elizabeth Kostova’s THE HISTORIAN. That book was amazingly well written, compelling from page one to the final page, with relevant, deeply explored characters, and a protagonist who you could get on board with. It treated history with the reverence required, the cities it moves through with thought and description, and most of all it stays with its own main mystery throughout, barely wavering from the goal and sees it through to a satisfying resolution.

CITY OF DARK MAGIC on the other hand is scattered, ill-researched, jumps around like a drug-addled monkey, with an unlikable protagonist who doesn’t even ring true to her own supposed character, who likes bouts of stress relief sex for little to no reason. The further I read, the worse it all got. Terrible book in my opinion. You might like it, but it was most definitely NOT for me.

Lastly, please note: The use of my biggest pet peeve written on book covers by Publishers. "A Novel" under the title. Yes, because clearly it needs to be written there... otherwise people would think they were purchasing an 8-track player or a fire engine?
Posted by GunMetalBlue at 7:07 AM