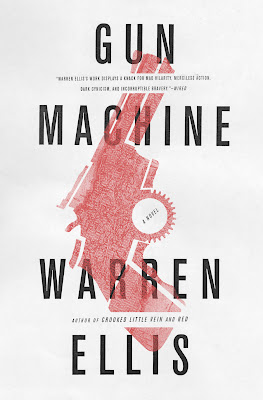 After a shootout claims the life of his partner in a condemned tenement building on Pearl Street, Detective John Tallow unwittingly stumbles across an apartment stacked high with guns. When examined, each weapon leads to a different, previously unsolved murder. Someone has been killing people for twenty years or more and storing the weapons together for some inexplicable purpose.

Confronted with the sudden emergence of hundreds of unsolved homicides, Tallow soon discovers that he's walked into a veritable deal with the devil. An unholy bargain that has made possible the rise of some of Manhattan's most prominent captains of industry. A hunter who performs his deadly acts as a sacrifice to the old gods of Manhattan, who may, quite simply, be the most prolific murderer in New York City's history.

Warren Ellis, like Neil Gaiman and Bill Willingham (amongst others) before him, began his author life penning comics. Warren Ellis penned some of the greatest comics of the 1990’s and 2000’s. Titles like PLANETARY, THE AUTHORITY, GLOBAL FREQUENCY, and TRANSMETROPOLITAN have actually help to shape modern comics and set the storytelling level that is now expected from the books. Without people like Ellis, Morrison, Gaiman, Vaughn ect. we wouldn’t have young bucks like Scott Snyder absolutely winning at writing superhero books.

So it’s kind of a no-brainer when someone like Warren Ellis pens a prose novel that a fan like me (I’ve met the man, and he is that awesome) will be picking it up. His first foray into such a media was 2007’s CROOKED LITTLE VEIN, a bizarre, compelling little volume about a washed-up P.I. who is hired to traipse across America’s seedy underbelly looking for a fabled, secret 2nd United States Constitution. I recall what stuck out about it when I read it was the infinite “readability” of it. The story could have been about a sentient washcloth and Ellis could have made it an engrossing read. It just so happens that he finds the most insane, yet interesting stuff to write about. He always has.

And GUN MACHINE (his latest prose effort) is no different.

The premise is wholly clever, bizarre, and interesting in equal measure, but it’s Ellis’ skill evident in his writing that will keep you reading well into the night. He can make the most pedestrian scene or set of events pop off the page like it’s some secret history. In this case VIA characters who are brilliantly fleshed out. The lead is John Tallow a detective at the end of his “caring” rope who is thrown into an unbelievable situation, and two CSU officers join him to solve it all. Scarly is a self-claimed autistic with a potty mouth, and then there is Bat, a nerdy guy with a temperamental stomach and has a penchant for the strange and robotic. There is a churchlike apartment filled with mosaics of guns from throughout history, each of them used in more than one crime and some of them over 100 years old. A madman named only “the Hunter” who crafted that room for his own purposes. John and crew must attempt to get to the bottom of why the Hunter has done what he did, how he’s gotten away with it for twenty+ years, and at the same time deal with more than 100 unsolved cold-case NYC murders that have come to light with the guns.

When I reached the end of the novel, it had followed a progression. Not a guessable one, but neither was it filed with twists and turns. Once you realize where it is headed you won’t be wholly surprised it went there. This is a story that has a compelling mystery at its heart, but its true success lay in Ellis’ prose which is so spot on that even a pint and bite to eat while chatting about the case sizzles off the page. The man is simply a wordsmith, and can craft a sentence that would be at home with literary masters. But what feeds through even that is the sensibility of someone who knows how people talk, communicate, and interact with each other on a REAL level. One imagines it comes from his years of blogging, tweeting and commenting on the internet, but Ellis knows people. In that vein, he then knows characters. So his characters sing, and we listen.

A wonderfully addictive read GUN MACHINE holds up under the most scrutinized eye. It’s at once a thrilling read with tension and danger at the fore, and also a quiet introspective look at inner feelings, turmoil, and personality. John Tallow is a POV character that it’s easy to get behind because even when he’s not being necessarily heroic, he’s being realistically heroic. It makes him flawed, but it makes him better than the more flawed villains. He’s not Sherlock Holmes, but he at least tries to look at things in more than one light at a time.

So, the first proper read of 2013 is Warren Ellis GUN MACHINE and I couldn’t be happier with how it turned out. It’s out in stores now, so you too can read it!

Posted by GunMetalBlue at 8:11 AM