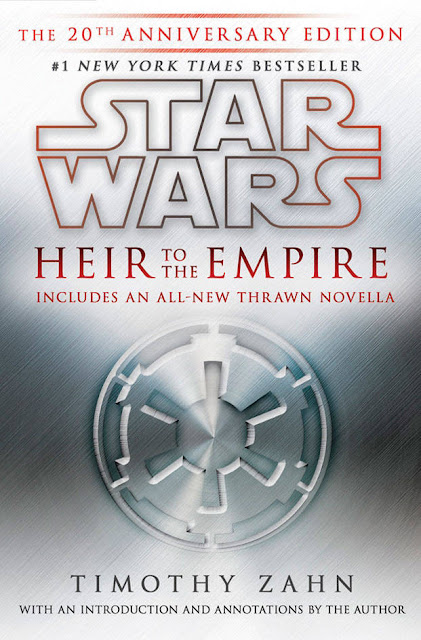 I’ve read a significant number of STAR WARS EXPANDED UNIVERSE (henceforth referred to as SW: EU) books in my life. Chunks of the NEW JEDI ORDER series, the entire LEGACY OF THE FORCE series and now the FATE OF THE JEDI series, with a few scattered standalone’s in there as well. What I have never done though, is gone back to the early post-RETURN OF THE JEDI books, most significantly, Timothy Zahn’s THRAWN trilogy beginning with HEIR TO THE EMPIRE. In fact, I have never read Zahn in the SW universe at all. This is a sad thing, seeing as how I just finished the recently released 20th Anniversary Edition of HEIR TO THE EMPIRE, and it totally blew me away. I realize now why so many people had given Zahn the crown to the SW: EU Book Universe, as he crafted a story that was not only worthy of the movies, but also totally gripping and character-driven. I had only meant to read the first bit as I was reading another book at the time I picked it up at the store, but my eyes were so glued to the pages that I didn’t stop reading till I was finished. So let’s review it shall we?

The original copy of this book came out in 1991. STAR WARS had been off the world stage for nearly 7 years, and though nostalgic people like myself who have always loved STAR WARS still kept it alive in our hearts, there hadn’t been any real new media in that universe in that long. I actually remember the book coming out and I remember (having been only fourteen) having to wait for it to come out in paperback so I could afford it on allowance. When it finally came out in that format I bought it, but I had yet to become the reader I am today, so it sat on my shelf looking pretty and I always wanted to read it but never got around to it. Actually at some point I lost the paperback my hard-earned allowance had gotten me, in one of the house-moves after my parents split. I had moved on and it wasn’t until 1999 when the first NEW JEDI ORDER book VECTOR PRIME came out that I decided to sink my teeth back into STAR WARS, partially of course because THE PHANTOM MENACE was about to debut and STAR WARS fever (which hadn’t been seen since 1984) was back with a vengeance.

So here I am entirely remiss, having glossed over Zahn’s contributions until now, and when I saw the 20th Anniversary Edition for HEIR I dropped my coin down and bought it.

One thing I should note: This version is completely annotated (in the margins) mostly by Zahn himself, but also a few notes from others who were involved in production. It’s like watching a DVD with the commentary track on, and lead me to my ONLY issue with the book. This version might be tougher to read for a person who has never read HEIR before, simply because the annotations (whilst not overwhelming) kind of take you out of the narrative sometimes (not always). So while I was totally fascinated by the commentary and insight into the makings of the book, AT TIMES it took me out of the narrative a bit. This would, of course, be much less jarring to a person who had already read it, so it’s not a huge thing, and as much as it jarred me a bit it wasn’t enough to displace me completely and with a bit of concentration I was able to stay on track mostly.

The story is amazingly well-realized, and one of the very first things that leaps out at you from the pages is the status of the galaxy five years after Endor, the Emperor’s demise, and Vader’s (Anakin’s) redemption. I remember feeling after the end of RETURN OF THE JEDI in 1984 how the galaxy was saved, the Rebellion succeeded and now they could get to the business of setting things right and peaceful, tied up in a nice little bow. What I never even thought about was that with a war that was as widespread as the Civil War was that defeating the Emperor and Vader would only be the beginning, and that the war itself (with the significant remnants of the Empire still around) would realistically continue for years to come. Some fifteen years in fact, after the victory at Endor before the Empire would be completely defeated.  So here we have Luke, Han, Leia, Chewie et al., five years after Endor, attempting to manage the fledgling New Republic from the Imperial Center (Coruscant – named by Zahn) with Mon Mothma, Admiral Ackbar and a council of high ranking Rebellion echelon, whilst around them the sectors of the Empire are doing everything in their power to revive their Empire after its head had been cut off. Enter Grand Admiral Thrawn, a Chiss (blue skin, red eyes) commander with a knowledge and command of battle surpassed by few, who takes his Star Destroyer, The Chimera, in search of ways to advance the Imperial cause. In this case he’s looking to expand his fleet of ships, as well as digging into a cache of experimental weapons and technology left by Emperor Palpatine on the planet Wayland. There he meets a Dark Jedi (the term Sith hadn’t been anything more than a Moniker Vader had in the Original Trilogy) who had been set to watching the Cache and seems a little less than stable. While Thrawn’s plans include building his fleet and defeating the New Republic, he also sees a way to recruit this Dark Jedi, named Joruus C’baoth, into service by promising to deliver to him both Luke and Leia (and Leia’s as yet unborn twins) to freely turn them to the Dark side and his own nefarious purposes. C’Baoth agrees and rather impatiently waits for the Skywalkers to come to him on another world.

What’s great about this story is that Zahn KNOWS these characters, and writes them with aplomb making them interesting and adding a few movie-isms in to make them even more recognizable. One feeling I got as I read it is that this IS STAR WARS. I could easily see how this might have followed JEDI as a film; it has great dialogue, action sequences, and even a few mysteries. It also had some new characters, like smuggler Talon Kaarde, Grand Admiral Thrawn, Captain Pellaeon, and most especially Mara Jade. To me Mara Jade has always been good (in the books I’ve read with her in them she is a good Jedi), so getting to see her as a distraught, angry and sometimes vicious Emperor’s Hand is an absolute treat. The first scene she shares with Luke is electrifying and you can certainly see why she stayed as such a prominent character in later novels. Thrawn is also impressive and is VERY well-crafted so much so that Zahn mentions that he got letters from servicemen in the US Military who said that they would follow him into battle. That’s high praise for the fictional character. Thrawn is so smartly drawn that he always seems a step or two head of our heroes, and that added a level of realism that I wasn’t expecting. Vader, in comparison, acted on impulse and passionate anger a lot of the time, but Thrawn on the other hand is cold, calculating and brutally efficient. The characterization across the board in fact, from the classic fan favourites to the new characters, is top notch and exists on a level I never thought was possible in the SW:EU. This guy just writes these characters so well that it makes me equally upset with myself for not having read his books till now.

As an opening chapter in a trilogy, this book is a fine example of storytelling, and an even finer example of where the STAR WARS universe went after that film in 1984. It has a number of great action sequences and even ends with a great space battle featuring everyone’s favourite Rogue Squadron leader Wedge Antilles.

As you can see by the picture, the hardcover 20th Anniversary Edition is gorgeous brushed silver with the Imperial Cog logo embossed on it, and I want to even note that the title on the inside page has been adapted to the STAR WARS title representation which looks really sharp. The annotations, as I’ve said above are wonderfully informative and ultimately fascinating, including Zahn waxing on the various things that he talks about having only JUST slid by the prequel’s latter information (which would come 8 years later), thus only a few odd things REALLY would require any major ret-conning.  Most of the instances are so well worded as sentences, or are said by certain characters that they can get by without needing ret-conning, which I am sure was nice for Zahn. We all know Lucas likes to tinker, so it’s nice to see that a bunch of Zahn’s inventions (like Coruscant) made it into the prequels and that offhand ideas like Rogue Squadron would become so huge in the SW: EU later on. There is also included a new short story (CRISIS OF FAITH) which takes place within Mara Jade’s past and fits somewhere into his latest books about her, ALLIEGANCE and CHOICES OF ONE, that I didn’t read simply cause I haven’t read those other books yet, but I will come back to it once I have done so.

If you are a STAR WARS fan at all and haven’t read these books yet, they are not only considered canon by Lucasfilm, but are a rollicking good time and one that shouldn’t be passed up. For those who HAVE read them, and already have the old paperback copy, I would HIGHLY recommend picking up this new edition not only for the gorgeous cover art, but for the incredibly interesting annotations inside. I am REALLY hoping that next year they will do a 20th SE version of the second book DARK FORCE RISING (and hopefully follow that a year later with one for THE LAST COMMAND) with annotations, but I have to sheepishly admit I could not wait to find out what happened, so I ran out and grabbed the old paperback copy of DARK FORCE RISING. I’m already 100 pages in and it’s already sizing up as good (if not better) than HEIR.

So I guess to Timothy Zahn I want to say THANKS for writing such a splendid novel, and sorry it took this STAR WARS fan so very long to get around to it.

Go out and get this book now, as it is well worth your money.
Posted by GunMetalBlue at 7:14 AM