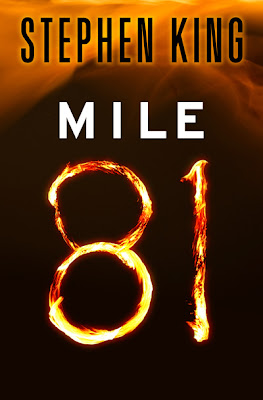 Actually, that’s misleading. It should say short story review or novella review or something like that. It’s 94 or 79 pages on my iPad (depending on what font size you use) but I have no idea how that translates into actual pages a la physical bookage.

What MILE 81 really is…is a giant teaser for King’s upcoming full length novel, 11\22\63, about a time traveler who tries to prevent JFK’s assassination. Simply by ponying up 2.99 for the MILE 81 ebook and you get a free chapter from 11\22\63. Kind of like the authorial way of a dealer telling you the first taste is (nearly) free. Regardless, it sounded like pretty good value for dollars to me, especially on a Labour Day weekend where I’d just run through all my reading material.

MILE 81 is about a mysterious car that breaks down at the side of an abandoned highway rest stop. Only the car isn’t really a car at all (is it ever?). The car has no driver, doesn’t seem to be a make or model anyone can recognize and it’s completely caked in mud, which is strange because it hasn’t rained in these parts in quite some time. A string of good Samaritans pull over to offer assistance, only to be eviscerated by the other worldly vehicle. As abandoned cars start to pile up on the side of the road it seems like no one can stop this ravenous roadster from wreaking havoc on wayward drivers.

This story is pretty much King just doing his thing. If you like his style and his subject matter than there’s nothing here that will drive you away. If the man isn’t for you, then you aren’t missing a heck of a lot.

I don’t think King has tackled a story with a car as the baddie since CHRISTINE, a point he cheekily references within the pages of MILE 81.

(I can’t think of any other author who actually has ‘Car as bad guy’ as a specific sub genre of their work. To my recollection King has three stories written in this vein, TRUCKS, the basis for the 80’s cinematic turkey MAXIMUM OVERDRIVE, CHRISTINE and now MILE 81. I think this officially means he has the field genre sewn up)

MILE 81 is slightly underwritten, although that’s a result of the length restrictions of the medium. Although King is brandishing his regular toolbox of writerly tricks and personal flourishes, there’s only so much even he can do in under a 100 pages.

As a result, the setup is flimsy, the build-up relies on a string of far-fetched coincidences that strain credulity and the final showdown between hell on wheels and our noble hearted protagonist is weak and doesn’t hold up too much scrutiny.

Although I was left with wanting more from the book, to be honest, that’s probably an unrealistic expectation on my part. Short stories are meant to be gobbled up quickly, rather than savoured slowly, and MILE 81 was the perfect pop culture morsel for the last weekend of the summer. And I find even King’s lesser lights to be more entertaining than the bulk of stuff out there.