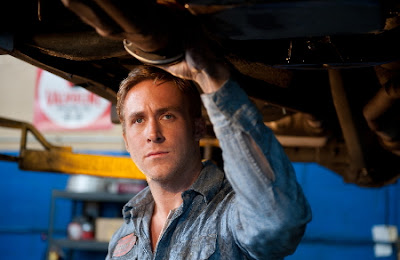 I couldn’t have picked a better film to start off my 2011 TIFF programming than DRIVE.

Like the 60’s Clint Eastwood Westerns of yore Ryan Gosling plays a nameless stunt driver, who supplements his income working as a mechanic at Shannon’s garage. But when he’s not doing that Gosling hires himself out as a getaway driver to L.A.’s criminal underground.

Gosling’s driver is a taciturn and calculating individual. Practically a mute, it seems as if the more pressure he’s under the more focused he becomes. But his highly fabricated world begins to fray when he starts to show an interest the single mother Irene, played with an almost childlike innocence by British actress Carey Mulligan, who lives just down the hallway.

After opening with a bang, showing Gosling driving two would be thieves away from the scene of a robbery entirely from the POV of inside the car, the film settles into a slow burn to allow Gosling and Mulligan sometime to build their onscreen chemistry. It seems as if the two lovers have barely begun their courtship when Irene gets the news that her husband (Oscar Isaac) is getting released from jail. When Isaac is beat up in order to extract some protection money he owes from his previous incarceration, Gosling offers to drive the getaway car for a pawn shop heist that will allow to Isaac pay off all his outstanding debts.

Unfortunately the pawn shop is holding onto a million dollars worth of a local gangster’s money and Isaac is killed mere steps from freedom. In the blink of an eye Gosling goes from in charge to out of control as he must figure out a way to protect Irene and give the mobsters back their money, preferably without losing his life in the process.

DRIVE is a gritty, intense crime drama, shot through with rich streaks of tragic love story.

Gosling’s lead character is an unlikely leading man. Too repressed and closed off to be truly likable, but sporting the prerequisite Hollywood heart of gold, he seems like a throwback to an earlier cinematic tough guy stereotype. Sporting a vintage racing jacket and surgically implanted toothpick he really could be Eastwood’s ‘Man With No Name’ stepping into the 21st century.

Gosling delivers his performance in a stripped down, minimalist style, managing to convey more tension and danger through the rasp of a tightened leather driving glove than any clanging movie soundtrack could ever hope to achieve.

At times Gosling’s overly pretty looks seems at odds with his moody character, but in the hands of director Nicolas Winding Refn you soon forget that this is the star of THE NOTEBOOK and CRAZY STUPID LOVE.

I was a little concerned that giving Refn an A-list actor might dilute is his normally uncompromising filmic sensibilities, but except for a few token scenes I was relieved to find that my concerns were misplaced. Refn continues to delight in gleefully pushing the boundaries of mainstream Hollywood filmmaking.

No character is ever safe. They hurt, they bleed, they die; frequently and often bloodily.

If Refn can’t physically maim his cast he resorts to torturing them psychologically. He rends friendships apart, betrays lovers and inserts the threat of betrayal into everything he puts onscreen.

And when Gosling’s perfectly constructed fantasy finally does fall apart, Refn makes sure that its shattered permanently, forever removing any chance of redeeming his leading man.

The film’s third act pushes DRIVE almost into a parody of a grindhouse revenge flick, with Gosling forced, in fits of gory ultra violence, to dispatch anyone who would threaten Irene.

Between Gosling and Refn DRIVE is elevated beyond a conventional crime drama into something quite different. It frequently switches film genres like some people switch underwear and the results are uniformly shocking. Supported by Bryan Cranston, Carey Mulligan and Albert Brooks (inhabiting a role as pragmatic gangster) DRIVE is a fascinating and compelling tale of the lengths one man will go to in order to the right thing.
Posted by Chris at 8:00 AM