Crackpot Doctor Who Theories: River Song is the TARDIS. 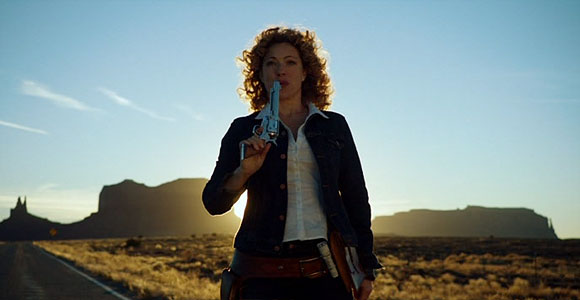 What a theory eh?

Well, I have various reasons that back up my notion that DOCTOR WHO character River Song (who first showed up in Moffat’s series 4, David Tennant episode SILENCE IN THE LIBRARY) is actually a human manifestation of the TARDIS.

So let’s get to my crackpot theory now shall we?

Who is River Song? She shows up and meets the Tenth Doctor in SILENCE IN THE LIBRARY and not only claims to know the Doctor, but know him well…or at least a future version of him. She has a diary full of things they’ve done together and even has a sonic screwdriver that looks a lot like his. The issue is that they keep meeting in the wrong order and are basically rushing past each other in opposite directions in time and while her meeting with him in SILENCE IN THE LIBRARY is her last for her, it’s his first of many encounters going the other way. That will presumably end with him meeting a much younger version of River Song who doesn’t know him. Follow me? So even when she appears again in the eleventh Doctor’s time (FLESH & STONE and TIME OF THE ANGELS) he knows her, but still not really. She knows how to call to him from anyplace and time in the universe but he doesn’t know how she knows him so well.

So what leads me to believe that she is actually a human version of his TARDIS?

Well, it all started with hearing about the Series 6 episode that Neil Gaiman has written called THE DOCTOR’S WIFE in which the Doctor finds himself in a spaceship graveyard and the rumor is that Suranne Jones who plays a character called Idris (TARDIS sounding ain’t it?) is actually the Doctor’s wife. Who could BE the Doctor’s wife? Why his TARDIS of course! He loves his ship. Loves it. Calls it sexy at times.

So how does this lead me to River then?

Well, if there CAN be a human representation of the TARDIS (and Suranne Jones version looks to be dressed very Victorian) then why can’t that representation change and look like someone different?

To make this easier, I’d like to set out my reasons in point form for you all:

-River carries with her a diary. A blue one cut with the panels on the cover to look like a TARDIS.

-She knows the Doctor's true name!

-She also carries a sonic screwdriver that looks like Ten’s sonic.
-She at certain points has had Jack Harkness’ wrist-time-traveling device, an item the tenth Doctor confiscated for a time. An item specifically made by his people to police time and could not be gotten by her any other way than being in (or part of) the TARDIS.

-She also carries the Squareness Gun, another item once owned by Captain Jack Harkness and confiscated by the Ninth Doctor (in the Moffat penned episode from Series 1, THE DOCTOR DANCES) and likely then resided in the TARDIS.

-She can fly the TARDIS by herself (a feat the Doctor can’t fathom), knows where the blue stabilizers are (another thing the Doctor didn’t know about), and can land it without the brakes on (the Doctor always leaves the brakes on resulting in the telltale VWAARP VWAARP sound).

-She has been in the TARDIS during two different occasions when the TARDIS was in mortal peril, once in the loop at the end of the series 5 finale, THE BIG BANG and survived.

-When the Doctor meets her again in the Series 6 opener THE IMPOSSIBLE ASTRONAUT his first words for her are “Okay, what have you got for me this time?” the very same words he spoke to the TARDIS when standing in front of it after it regenerated itself during the Series 5 opener THE ELEVENTH HOUR.

-In THE PANDORICA OPENS when River sees Amy's raggedy Doctor dolls in her house she says "I don't know why I ever let you out." Think about that statement...really think about it.

Of course at this point this is grain of salt, huge ridiculous speculation and whatnot, but for some reason a lot of this stuff just seems to click for this theory.

There is also the other theory that River is Amy’s future daughter (Amy has preggers stomach pains in THE IMPOSSIBLE ASTRONAUT and River seems to have phantom sympathy pains) and that the man she kills is Rory who would be her actual father. But that one is an even wilder speculation than my above nonsense.

Anyway, it’s just something to think about as we head into the second part of the season-opener (THE DAY OF THE MOON) tomorrow night.

Posted by GunMetalBlue at 6:01 AM