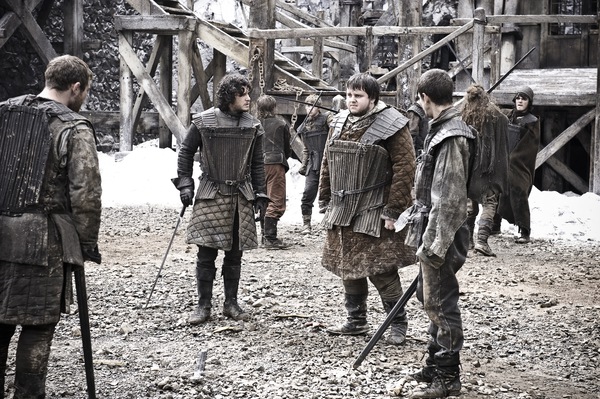 Let’s turn things down a bit, shall we?

King Robert’s (Mark Addy) party finally arrives home at King’s Landing. Not wasting any time, Eddard Stark (Sean Bean) dives into the administration of Robert’s kingdom only to discover that the crown is destitute and its ruler disengaged from the affairs of state. The strain of Stark’s new position is also taking a toll on his family. His two daughters, Sansa (Sophie Turner) and Arya (Maisie Williams), are having difficulty adjusting to their new circumstances and take their frustrations out on their father and each other.

Meanwhile, at the Wall, Jon Snow (Kit Harrington) realizes that his noble upbringing alienates him just as much from his new ‘brothers’ as it did among his old family. As he strains to distinguish himself among the Night’s Watch Snow continues to come to terms with the fact that he has willingly signed up for a lifetime of thankless servitude and rough living.

Finally, across the sea Daenerys Targaryen (Emilia Clarke) is becoming more comfortable with her role as khaleesi of the nomadic Dothraki. But as she matures from a frightened girl to a confident queen it provokes frequent and violent clashes with her impatient brother.

George R.R. Martin structured his A SONG OF FIRE AND ICE series much like a tapestry. Rather than create a single narrative, built from the viewpoints of its supporting characters, he instead created dozens of smaller, more personal story lines. In the books, point-of-view chapters are devoted to the narratives of individual characters. These plotlines don’t serve the needs of a single unifying story, they are simply the personal narratives of a few key individuals. It is only when these separate narratives are woven together is the reader able to get a sense of the bigger picture. This non-traditional structure puts an emphasis on character over story, and that’s just fine.

So why all this blathering on about character? Well it has a lot to do with the fact that Episode 3 of HBO’s hit series, GAME OF THRONES, was a very character driven episode.

Providing a distinct counterpoint to the slightly more flashy previous offerings, episode 3 is all about grafting back story and plot exposition onto a series of intimate two hander conversations.

Director Brian Kirk wisely chooses to lock his camera down and let the talent do what they do best, act.

By now we’ve seen that Sean Bean manages to do more a single arched eyebrow and a barked curse than most actors could achieve with a florid soliloquy. Or that Peter Dinklage is spot-on with his impish and impudent Tyrion Lannister.

But surprisingly the supporting actors in the series have managed to step up there game as well.

There’s a remarkably restrained scene between Addy’s King Robert and his brother-in-law, Jamie Lannister (Nikolaj Waldau). Addy’s portrayal of a drunken blowhard eschews easy clichés and instead manages to paint a portrait of a deeper and more complex individual. And Waldau is sarcastic, disrespectful and arrogant in turn without ever losing that all important veneer of respectful deference that defines his position.

Maisie Williams inhabits the role of Arya Stark as if she were made for the role, demonstrating that she is more than just a petulant tomboy but a courageous young woman yearning to do what is right, rather than what is convenient.

And I am constantly impressed by how Lena Heady has managed to turn her one note role in the series premiere into a nuanced character more driven and pragmatic than truly evil.

It’s a little strange that only three episodes in GAME OF THRONES would already be taking a breather. But I think ultimately it’s an opportunity well used. Given the complexity and density of the character and social relationships of the production, a little time spent on fleshing out the universe can only benefit the audience.

As the show goes on I find its willingness to uncouple itself from slavishness to the original source material refreshing. A GAME OF THRONES is beginning to find its feet and take advantage of all the potential offered to it by its new medium.

While the more action oriented might have found last night’s episode dull, I choose to look on it as setting the stage for the blood and gore yet to come. Last night's episode was all about the power of subtlety and nuance, a strong episode for a show that continues to impress.
Posted by Chris at 9:47 AM

Email ThisBlogThis!Share to TwitterShare to FacebookShare to Pinterest
Labels: A Game Of Thrones, Review