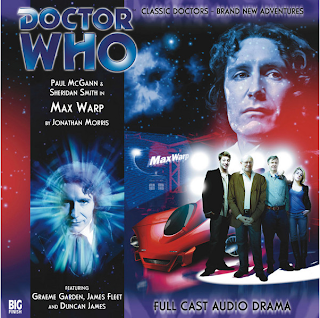 As much as the Series 2 opener (DEAD LONDON) was an irreverent and yet mostly effective (if odd) way to start the 2nd series of Eighth Doctor & Lucie Adventures…the second episode, MAX WARP, makes up for that by being pretty much everything we love about DOCTOR WHO in any medium.

The story begins with the Doctor and Lucie attending a Motor Show. Well, it’s technically a very popular Spaceship Show. If you’ve not already guessed it from the title and that small description, this really is TOP GEAR in space. Strangely, or perhaps not-so-strangely, this premise fits into the DW mythos and story-style like a leather driving glove (yeah, I went there). From the multiple, and varied hosts talking about the newest, sleekest spaceship, to the Doctor behaving like a proper Ship-Enthusiast like a gleeful 12-year old, to Lucie calling it all boys-with-their-toys and making jokes at the Doctor’s expense, this is everything you love about TOP GEAR transferred into DOCTOR WHO.

So where does the intrigue come from in this episode? Well that’s an easy one. The show Max Warp is filming live from the Sirius Inter-G Cruiser Show, which was installed as an event to bring two previously warring worlds (the Varlon Empire and the Kith Oligarchy) together, and is set in a station orbiting nearby. The two hosts, smarmy, sexist Geoffrey Vantage, and spaceship enthusiast, Vantage-whipping boy O’Reilly are seen commenting on their fellow Max Warp member, and hotshot pilot Timbo “The Ferret” just before his ship malfunctions and plows into a nearby moon. The intrigue and investigation (launched, of course by our intrepid Doctor and Lucie), begin in earnest with Lucie attempting to guess whodunit, and the Doctor trying to methodically interview people. Because Timbo was clearly murdered, and the uneasy peace between the Kith and the Varlon is at risk.

Lucie is absolute, 100% pure gold in this episode. Sheridan Smith just nails the comedy in Jonathan Morris’ script. I kept laughing at her comments as she gets most of the plum lines, up to and including her final line (which I won’t spoil for you, but it’s hilarious!). Her verbal sparring with Eight (one of the best bits about their relationship) is in fine form in MAX WARP. Not only do we get Paul McGann doing a proper fanboy excitement about the fastest and the sleekest ship (listing off features like he’s read multiple magazine articles about it), but we also get a wonderfully diverse secondary cast. Graeme Garden is suitably nasty, sexist, and just deliciously horrible (read: hilarious) as Geoffrey Vantage. I seriously could not believe some of his script beats (‘It’s a mans spaceship! Literally fuelled with testosterone! Ladies bring a toothbrush and a spare pair of knickers!’ or ‘Just smile and stick out your bits!’ to Lucie), but I adored how well Lucie sparred with him and put him in his place without him really catching on. Further still to the sexist angle we are given a different, but no more unwanted bit of that with mousy O’Reilly attempting to get Lucie to go to his room with him, and she kind of beats around the bush to let him down easy, but even he doesn’t get it and she has to end up rather sternly telling him “No.” I loved that aspect of the script as it showcases that sometimes even the nicest of guys can say and do the wrong things without realizing they are, and they need to be told they are out of line. It’s an attentive moment that I noticed and enjoyed, because Lucie really does give him a second to realize (and he’s just totally oblivious) before getting more direct with him.

The mystery/motive is fairly well hidden amongst a few red herrings and plot twists, added to by Lucie throwing out suspect after suspect and giving Sherlockian reasons for their guilt. The SpinDroid (a politician’s assistant / crutch) is wonderfully whimsical when he is on scene and sounded suspiciously like the droid from RETURN OF THE JEDI who tells R2 that he “has need for him on the master’s sail barge, and that he’d soon learn some respect”.

The political machinations at work are light, but given gravity due to the instability of the two world governments, and add tension to the proceedings of the investigation.  The whole thing (the event, the crash and the murder) begins to stink of an elaborate scheme and it's up to the Doctor and Lucie to sort out what and why. It's quite satisfying on that end when all is said and done, and that's really all you can ask of a DW mystery. I should not be able to guess the final outcome, and I think in MAX WARP, this is achieved well. But it's more than likely going to be how fun and hilarious this episode is that will sit with you afterwards. It's pure enjoyment for 50 minutes.

The aspect of envy on the part of the Doctor, who adores his stolen TARDIS, towards these super sleek, fast spaceships was palpable and entertaining. It’s always funny to think of it, since the TARDIS really does trump every other mode of transport, but the Doctor can’t help but feel a little envious. But it’s like owning a Smart Tank than can roll through anything and survive (and travel in time and space), but being jealous of a Ferrari, which is shiny, fast and nice looking, but could be ripped through like tin foil (BTTF reference intended).

Big Finish has their first big hit of their second Series with MAX WARP, as entertaining as some of the best from Series 1. The comedy and action are both spot on, and character interaction is tops. I’d ALMOST want to say if you were thinking about giving Series 2 a go and were wondering if it was worthy, that you should put DEAD LONDON off (briefly) and hit up MAX WARP first, as I feel it’s probably more entertaining to the casual listener.

NEXT TIME: The Doctor and Lucie visit a seaside town, in the middle of nowhere in 2008 that is seemingly stuck on a Sunday in 1991 and so are its inhabitants, in BRAVE NEW TOWN.
Posted by GunMetalBlue at 7:34 AM