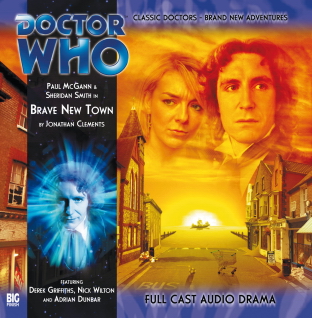 Contrary to his Series 1 outing (IMMORTAL BELOVED), writer Jonathan Clements Series 2 outing BRAVE NEW TOWN didn’t leave me with the same warm fuzzies. This is not to say that it was bad, more than it was just a step down from his previous script, as well as from the two preceding Series 2 stories. Instead of coming in at Great, or Solid, I think it just kind of succeeds by the use of a classic villain in an interesting way...and Is.

Nitty Gritty. The Doctor takes Lucie to a seaside town in 2008, just not the one she thought it was going to be (she was thinking of her home, Blackpool). The town has a few anomalies though. It’s seemingly not by the sea (though it is called Thorington-on-Suffolk), and instead rests at the center of what looks like a dried up lakebed. The people who inhabit the town think it’s Sunday Sept. 1st 1991…everyday. Brian Adams is annoyingly still #1; there is no food, no gas in the cars, and no electricity. So what exactly is going on?

Enter Classic Who villain the Nestene Consciousness and the Autons. More importantly Autons that look and act VERY realistic because instead of merely being remote controlled by the Consciousness, they have a small piece of it inside them.

Now, while the Autons work fine on Audio (something the producers at Big Finish revealed initially being leery about), the telltale arm gun sound is pretty much all you need. It’s about as recognizable as “Exterminate” and “Delete”, so there was really now worry there. However, because of the nature of the tale, one in which these Auton’s don’t really KNOW they are Autons, and aren’t really doing any kind of attacking, they come across as far less scary than they could/should. I get that we are seeing the Audio Drama equivalent of the TV episode DALEK in which we take a Classic villain and put them in a situation that humanizes them…but where DALEK still maintained the scare-factor of the villain, the Autons all but have their teeth removed by being too humanized. So in the end the Doctor is simply working against the connection to the consciousness VIA the control box that gives them orders, and That’s. About. It. If there is anything scary about the episode, I’m not sure what it is. That’s obviously not a prerequisite to a DOCTOR WHO story, but it is nice. My fave thing about DW is the running, and the action, mixed into a good story. There is little of that in BRAVE NEW TOWN.

That’s not to say there is nothing good. It’s a rather compelling mystery to begin with before the Auton’s are introduced. It’s just afterwards that it becomes a bit plodding. Or at least it did for me. McGann, Smith and their co-stars (Adrian Dunbar, Derek Griffiths, Lorna Want and Nick Wilton) all do an admirable job of performing the script, and Lucie especially gets some plum funny lines (“Where does plastic come from?” “Taiwan!”), but overall that’s the only thing I come away with having enjoyed. The tale itself was probably one of the more mundane ones I’ve listened to since I stared the EDA’s.

So all in all, I think my experience with BRAVE NEW TOWN comes down to match the final line by Lucie.

Doctor: I saved a brand new race from certain destruction!
Lucie: With a little help from me.
Doctor: …
Lucie: You’ll never admit it will you? Never in a month of Sunday’s.

So yes, that’s a bad pun on the fact that it’s always Sunday on Thorington, and that’s the final flavour I walk away from this story with. It’s decent enough, but is about as entertaining as a weak pun.

NEXT TIME: We skip 2.4 SKULL OF SOBEK (mostly because I don’t have it yet) and move onto 2.5 GRAND THEFT COSMOS.
Posted by GunMetalBlue at 6:52 AM