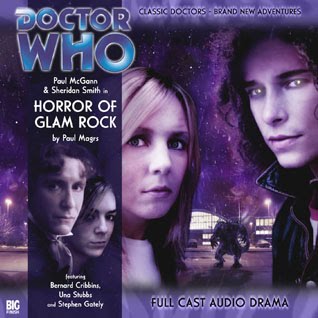 This is going to be a shortish review, if only because while I enjoyed THE HORROR OF GLAM ROCK, there is not oodles of meat to it to discuss. I’d call it a character / relationship building episode.

Following the harrowing, darkish events of Lucie Miller’s first trip / adventure in the TARDIS with the 8th Doctor (Paul McGann) (BLOOD OF THE DALEKS PI & II: See Review) it seemed like time for a little lighter fare. And that is exactly what writer Paul Magrs delivers in THE HORROR OF GLAM ROCK.

Realizing that they’ve been manipulated by the Time Lords (see Ep I &II) to have Lucie in the TARDIS for “witness protection”, the Doctor attempts to take her home to Blackpool in 2006. Sadly, because of the machinations of his race, the Doctor can only get to 1974 and miles away at a service station on the M62 Motorway. Lucky for him (or unlucky I guess?) there are nefarious things going on in and around that service station. Something is killing people, rending and tearing them into pieces. The latest victim is a glam rocker. The two find that another pop group, The Tomorrow Twins (played by Clare Buckfield, and Stephen Gatley), their manager (the always amazing Bernard Cribbins…who would go on to play Donna Noble’s father Wilfred Mott on TV in Series 4) and a couple of employees at the place (Una Stubbs and Lynsey Hardwick) are being besieged by bearlike monsters and they have no idea why. Something sinister is definitely at work, but what is it, who is orchestrating it, and what does it have to do with this new Pop band and their manager?

I won’t spoil any more of the plot, but it’s certainly a lot of fun. Like I said, compared to the opening two-parter, this one allows for a lot more comedy and I think that’s a nice breather to have. Is it groundbreaking DOCTOR WHO? Nah, but it’s still well written, solidly acted and paced splendidly. The hour was over before I knew it. Cribbins kind of steals the show in this one. He’s just perfect in the role. It’s not hard to see why we ended up loving Wilf in later DW Series 4 on TV…Cribbins just steals your heart (even here where he is technically playing a nasty guy). McGann and Smith get a few moments to begin the fleshing out of their characters and the relationship. It’s not deep or anything, and there are only a few moments of it…but you can see that each writer is giving a little bit more to these two. It’s hard starting out how they did, being totally suspicious of one another, to build a friendship, so it happens in fits and starts in this script and I liked that.

The last thing I want to note is that the one character (Pat) turns out to be Lucie’s future Aunt Pat…and in any other story that would seem too much of a coincidence. That said, since this particular Doctor/Companion Arc has Eight attempting to bring Lucie home and not getting too close (time-wise or location-wise), it made immediate perfect sense to me that the TARDIS brought him to a place where a member of her family who shares her DNA would be. I thought it a nice touch, and I like that Lucie doesn’t pretend this is not the case, she immediately tells her Aunt Pat who she is.

THE HORROR OF GLAM ROCK is quite a fun tale, and while it’s not necessarily the best of Eight’s Adventures, I still had a blast listening to it. Oh and the included Glam Rock rendition of the DOCTOR WHO theme is just wonderful and kitschy, glad it was included!

Series Note: You might notice that we are going from 1.3 to 1.6 and that is because I don’t yet own 1.4 (IMMORTAL BELOVED) or 1.5 (PHOBOS) …I hope to get them at some point in the future and review them, but for now we’ll move on.
Posted by GunMetalBlue at 6:34 AM