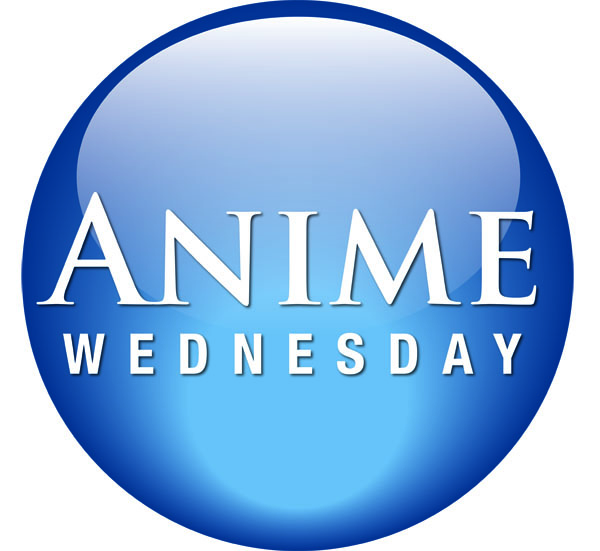 It’s been a while.

Sorry about that. My issue was not to do with there being a lack of good Anime out there, and much more to do with the time I had to devote to it recently.

So lets jump back in the water shall we? I was recommended a few different shows that are currently airing in Japan and therefore airing on CrunchyRoll… 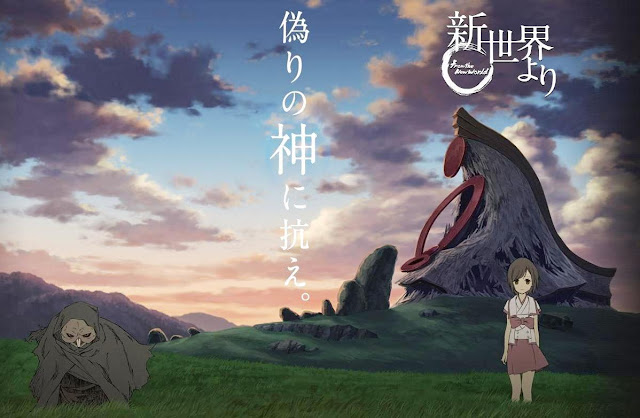 The first of those shows is the topic for today’s Anime Wednesday feature is SHIN SEKAI YORI (FROM THE NEW WORLD), which is based on a novel by Yusuke Kishi, that’s been adapted to Anime by A1 Pictures.

I don’t know if it’s evident from my enjoyment / championing of things like EVANGELION, STEINS;GATE, and SUMMER WARS but I like Anime that is twisty, brain-melty, and makes you think…and then makes you rethink what you thought from a different angle…and then beats that theory all to hell and presents you with something that makes your jaw drop and in hushed tones you whisper “Sweet gods…that is brilliant." before passing out in your fishsticks and custard.

SHIN SEKAI YORI (SSY) is a show that does that. In fact it does it from the very outset prologue. It begins in 2011 when people start appearing to have strong psychokinetic powers…but instead of being a good thing, what follows are shots of young people standing and the people around them being obliterated into smears of blood and goo. It appears that they can’t handle these powers and in some cases allow the darkest parts of their personalities to take over and commit horrible atrocities. 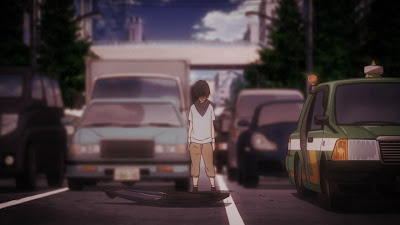 That was in the first 3 minutes.

I was agog…and hooked. What the hell was going on?

Then we jump forward in time 1000 years. In a secluded rural village, the young people (whose powers have awakened) are taught in school to control, and use those powers for benign goodness and to help in everyday life. They are closely watched and any behaviour of an offensive nature is quickly stamped out. This is evident in a game they play with clay dolls and constructs where they must move a giant ball from one end to the opponents end and try to score, but you cannot directly offensively attack the ball, and instead have to manipulate the clay constructs around the ball to try to defend your goal. It’s idyllic, or at least it seems idyllic. 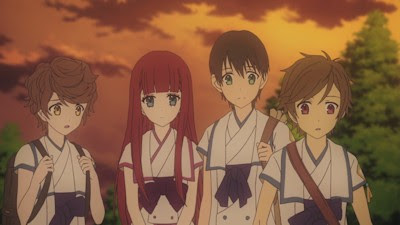 Enter our various protagonists. Two girls and three boys. They are: Saki, Maria, Shun, Satoru, and Mamoru respectively. As we first look in on them, they range in age from 12-14. Slowly, and seemingly innocuously in the first episode, one of Saki’s friends who is shown to have weaker powers than her classmates disappears. But it’s not until the second episode (when a student is accused of cheating in the game) when another child disappears that the audience is hat-tipped to something “going on”.

The key event that tempers their youth is a summer trip, which all students must take, up the river to a location where they must examine the natural world and write reports on it. But after a campfire-story about a creature called a Minoshiro (who won't let you past it and kills you) scares/intrigues them, they head out in search of one…but when they find one they realize that the creature is not what it seems to be and may not be natural at all. What follows is an absolutely ENTHRALLING episode in which the young, naïve children are told a large selection of the bloody, violent history of the last 1000 years that they knew nothing about. That’s about as far plotwise as I’ll go, since you need to watch this show yourself, but hell, aren't you curious?!

So, why should you watch SSY? Well, quite frankly the writing, though subtle, is delectable perfection. Every single time I thought I had a grasp on what the show was trying to tell me, or assumed I’d unraveled a mystery…it would spend the next episode throwing curve balls at me. The best feature of SSY is that you don’t know who to side with from episode to episode. Upon an initial watch of the first few eps you begin to think that the children of this peaceful town are obviously being manipulated by someone…but then you’ll get a few eps where they spin you around and you get a different angle where you almost side with whomever is manipulating things, and then you’ll get another episode from another angle entirely which flips your POV even more. It’s like the thought patterns of SSY are on a gyroscope and can turn and twist at any moment….but it never loses track of the tale it is telling in the process. It’s a difficult type of show (I am sure) to write, but it has nonetheless not yet faltered. There is a side story with these anthropomorphized Rat societies (some warlike, some slaves, and some peaceful) that seems like it’s not part of the main story, but the more they concentrated on it, the more I realized it actually IS part of the overall tale…their position on the game board just hasn’t been solidly established yet.

The show also time skips at episode eight forward two years, and we get the same tale being told, but this time it’s with hormonal teens as well, so you can add romance, jealousy, rebellion, and other teenage issues to the mix…which on another show might add an unwanted complication to the narrative, but here it actually works, since the ages of the characters are very important.

My single favourite thing about the show (other than finding out how humanity progressed after 2011’s gruesome beginnings), is the fact that we are actually being told the story from a further 40 years in the future by an aging Saki…and she is wont to pepper her narrative with nods, secrets and cryptic phrases that make you question even what you are watching and look at it harder.

As far as I am concerned this show is utter and complete genius so far (They are 16 episodes into what I assume will be a 26 ep season) and that if there was a short list of television that was airing in Japan that you OWE it to yourself to be watching, SHIN SEKAI YORI would be very near the top of that list (if not the very top).

Head on over to crunchyroll.com right now and check it out for yourself (streams with ads for free), you WON’T be disappointed!

Stay Tuned next time for an article about the other show I recently discovered there called BLAST OF TEMPEST!
Posted by GunMetalBlue at 10:13 AM