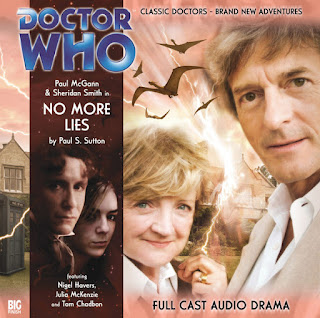 Editorial Note: This review may contain trace amounts of minor spoilers…and peanuts…but mostly minor spoilers. You have been warned.

There are a few things I absolutely love in my fiction, and writer Paul Sutton’s script for the 6th Episode in the Eighth Doctor's Audio Adventures, NO MORE LIES, has two of them in spades, and it even tickles at a third of them.

It has, in no particular order:

1. It begins In Medias Res. Which means that it starts midway through a story as opposed to at the beginning.

2. It concentrates on character first and foremost and story second. Though it allows neither to languish, but rather finds a way for them to work in a wonderful harmony.

3. This is the tickler one…it has a monster which is being manipulated by another monster or set of monsters.

Basically, when this one started I actually pulled out my iPhone, paused it, and double checked I’d started it at the beginning. We are thrown headfirst into the deep end and understand nothing of the situation which The Eighth Doctor and Lucie Miller find themselves in. There seems to be a criminal of some kind that they are attempting to stop, they are aboard some sort of time ship, there is a race of beings called the Tar-Modowk (who seemingly exist only in the Time Vortex) who ride pterodactyl type creatures called Vortisaurs. It is literally chaos from moment one. In those first 10-15 minutes of the tale, those are the few things I grasped. Well, Zimmerman (the criminal) escapes with the time ship, leaving the Doctor and Lucie to chase him down…only to find themselves on earth at a posh evening garden party, where it looks to be as if Zimmerman has been settled for 30 years and is married to a woman named Rachel. Huh? "What's going on?" you ask.

How this connects to the chaotic beginning of the story is what Sutton spends the second half of the script revealing. And boy does it work well. The characters absolutely pop through your headphones. We can start with the guest stars. The wonderful Nigel Havers (who would go on later to star in the DW spin-off THE SARAH JANE ADVENTURES in THE WEDDING OF SARAH JANE SMITH) plays Zimmerman and the equally stellar Julia McKenzie plays his wife Rachel. Both are in middle-to-old age and have spent 30 years together. The chemistry they share is absolutely one of the shining moments of this episode. They act as close to a married couple of their age would be. It’s very realistic and believable and both actors sell each line they deliver. One of the nice things about these Audio’s is that you get to imagine a lot of the visuals yourself. Monsters, spaceships, lasers, battle, villains, planets ect. It’s all up to your thinkymeatz to discover…but when it comes to character interaction and depth, that’s up to the actors alone to sell you. So when both Havers and McKenzie emote through voice alone, it just locks the narrative in and you are invested, and that was something I was pleasantly surprised by. Well done across the board.

By this point The Doctor and Lucie have had a few adventures together and their relationship is growing and the bond they are forming is becoming a little more solid. Paul McGann and Sheridan Smith continue to prove to me, with each subsequent outing, that they are a TARDIS Team to be reckoned with. Not only that, I am (at episode 6 of the 1st Series) totally 100% a fan of Eight and Lucie. Call the papers; we can now add them to the master list in my head: Ten and Rose, Ten and Donna, and now Eight and Lucie. They just work so bleeding well together, and I find myself self-consciously grinning at their various scenes of clever back-and-forth. And the key here is a gradual growth, Eight and Lucie start out totally wrong footed, and through their own set of trials and tribulations they begin to not only trust each other but form something of a bond. That bond is not totally there just yet, but it’s getting there and in NO MORE LIES, a tale which showcases such character acting, it’s on display. It's nice to see we dind't make any logic jumps from "snarky, untrusting Doctor and Companion" immediately to "Bosom buddies Doctor and Companion". There's a number of steps involved and this one seems to have them on the cusp of that final solid relationship.

Not to be undershadowed (a word?...not a word), the story itself in NO MORE LIES is wonderful. It’s clever and well executed, and the In Medias Res thing works to its advantage. It takes your eyes (or in this case ears) off the things which might reveal end-plot to you and leads you astray for a bit. When it comes back in and you begin to have your end-plot revelations…well then they hit you like a ton of bricks. It might seem a small tactic, but it truly works here. There are many plot strands at work in this episode, but the ones that need to shine…are allowed to shine properly by the end. It left me very contented when it finished and the credits ran. To me it’s the best of the 1st Series so far. But then again, I love character episodes, and this is definitely a character episode.

Sidenote: It’s probably a little weird to admit this, but in the wonderful "CD Extra’s" included after each disc/episode (interviews with the casts and such) when Nick Briggs, in a monster voice, says “CD EXTRAS”…it always makes me laugh and usually I repeat it in my own monster voice out loud...even on the subway. It gets weird looks. As well it should I suppose.

NEXT TIME: A two-fer review for a Two-Parter. I look at the Series 1 Eighth Doctor Finale, 1.7 and 1.8 THE HUMAN RESOURCES Part’s I & II.
Posted by GunMetalBlue at 9:49 AM