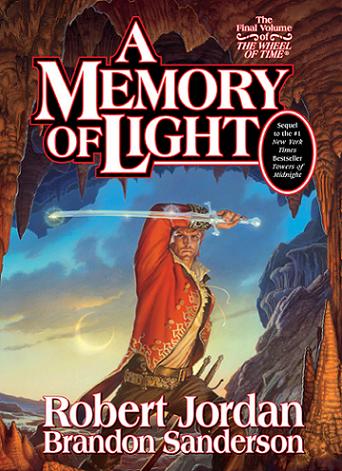 This is going to be a rather shortish review since to do a long one would require spoilers and I’d rather not spoil anything.

I came on board The Wheel Of Time late. I began the first book sometime in 2003-04 but didn’t actually get around to finishing it till probably 2007-ish. Slowly over the course of the next few years I caught up. So I have only TOWERS OF MIDNIGHT and (now) A MEMORY OF LIGHT in hardcover as books I awaited for release on. Everything else was already out and in paperback when I read them. I’m not going to go into the particulars on the series that everyone knows. The bloating of the story, the books where nothing happens, Jordan’s sad premature death, Brandon Sanderson finishing the series ect. It’s all common knowledge. So 23 years (and fourteen books) after the story was begun, we finally have an ending.

Was it worth it?

I’m a little under a week removed from finishing the book (which immediately afterwards I found I’d enjoyed it more than I realized I actually did now in hind sight), and in those few days I’ve gained some perspective, and the resounding answer to that question is…no.

A lot of that has to do with the fact that the story (initially meant to wrap up in 3 books) became an unwieldy behemoth with a thousand plot strands (some worthwhile, some not) that for all intents and purposes slowed to a crawl and should have been edited far better. It’s basically (in my head) a six book series bloated to fourteen unnecessarily. Perhaps it’s the fact that I recently finished Steven Erikson’s Malazan 10-book series and the fact that for the most part Erikson kept everything arrow straight and headed towards the ending he gave us (even with multiple plot strands and a thousand characters)…that the meandering of The Wheel Of Time ends up causing me major issues. I don’t truly know why.

Was it a good book? Yes, absolutely. Was it worth reading? Yes…to finish the series and put it behind me.

Let’s get down to it. The book is (for the most part) a 900-page battle. The Last Battle. Is it good as a battle? Err…yes and no. It has a few heroic moments (only a few), but more often than not you saw the words “trollocs”, “weave”, “gateway”, “channeling”, “exploding earth” simply repeated ad nauseum. It was one battle section after the next in which small things might be slightly different on a character level, but it was still just hordes or trollocs, evil channelers, and one or more of the Forsaken causing our heroes further problems. The character stuff ends up either falling short of what one might wish as a fan (some characters get throwaway deaths or unresolved abrupt endings), or ends up being something abhorrent to serve the story (ie. Tuon and the Seanchan not changing their slavery/torture ways and Rand and Co. having to accept this for the help the Seanchan will be against Shadow) which I find convenient and horrible.

Everyone gets a bit of the spotlight in this book, and while some characters sing in their roles, others kind of flop lifelessly around on the page. Like Boba Fett showing up in the re-mastered STAR WARS: A NEW HOPE, they are only there to say “Look, here I am!” or fulfill some other needed plot point which was left hanging by RJ and Sanderson needed to tie up. The main characters get the most screen time and that is fitting of course, but once you’ve waded through 500 pages of these activities, even their plotlines become more of an “Okay, let’s move this along now please?”

The one thing I find really works in AMOL is the use of the Forsaken in a subverted way to try to win against the armies of Light. I enjoyed how that was accomplished and resolved in the book and it’s probably one of the things I came away from enjoying most. It's a small thing, but it seems more than plausible and in character, aside from the armies of Light not expecting it.

Does the book resolve things? Yes and no. Like I said, the book is nearly 900 pages of battle. That includes the fact that the only epilogue we get is one chapter, and it takes place right after the battle and concerns one event. So where I assumed we might have gotten through the Last Battle and then had a hundred or so pages of wrapping up (this is the finale a fourteen book series FFS!), we instead finish the battle and get a short chapter after that explaining one immediate aftermath event, and that’s about it.

Consider me disappointed by that. Jordan can take like six WHOLE books to tell us about every damned Leatherleaf tree and hummock of ground surrounding our heroes as they wander around aimlessly...but we don't get ANYTHING after the biggest Battle in history? Right. Good. I see.

So what should have been a book that was full of win, ends up being just a book that finishes. It wraps up enough overall to be satisfied, but I am FAR from impressed. Where THE CRIPPLED GOD (the final Malazan book) left me bereft, emotional, impressed, and basically cradling my own brain and heart from the excellence (leaving me with a book hangover that lasted nearly two weeks)…A MEMORY OF LIGHT on the other hand felt like a petered out, final ending that I enjoyed, but it did not impress, it did not stun, or leave me with a book hangover of any kind. It just kind of IS.

“But Scott…” you say “The battle scene’s must have been worth it, right?”

Yes and no. There was some VERY cool stuff, very heroic charges and last stands…but a lot of it was posturing and action with stolen payoffs. In fact I think Perrin says things to himself along the lines of “Once more into the fray” or “here I go, one last time” about 4 or 5 times. The second time he does it, I remember thinking, “Oh, he’s doing this again.” It’s kind of a thunder stealer. The same can be said for Lan who has more than one heroic final charge. Demandred seemingly existed as a rock for heroes to throw and break themselves against. And while that plotline was amusing to watch, it also felt like a way to carve some characters out of the final book…but then again kind of steals something from them in the process. That is one of the worst offenses in the book; the stealing of emotional beats. It's rife with that sort of nonsense, and always felt like "chickening out" to me. Don't chicken out. This is book fourteen; big stuff is GOING to happen, be okay with that and let it happen.

A MEMORY OF LIGHT is not the ending I think I expected or wanted from this series, and even though it began well (the first 200+ pages absolutely SANG by) I felt it drew on far too long, ended too  abruptly and became a manic tying up of loose ends instead of the dovetailing it should have been.

It’s not the ending I expected or wanted, but it was AN ending. Let’s leave it at that.

And now I can sell the books to the used book store.

Email ThisBlogThis!Share to TwitterShare to FacebookShare to Pinterest
Labels: a memory of light, Brandon Sanderson, Robert Jordan, The Wheel of Time, TOR