Doctor Who: The Snowmen (review) 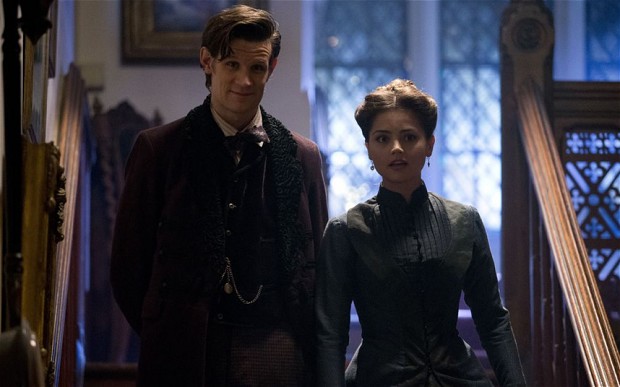 I was waiting. The boy who waited, if you will...for THE SNOWMEN.

When last we left the Doctor, he was stuck in THE ANGELS TAKE MANHATTAN...his best friends had slipped away through a plothole you could drive a mack truck through, in an hour where that wasn’t even the biggest plothole or script gaff. Bottom line: He was in rough shape. So he moved...to Victorian England where old friends Madame Vastra, Jenny and the Sontaran named Strax (reconstituted after his death in A GOOD MAN GOES TO WAR [thus removing ANY sentimentality you had about how heroic his death was...but nevermind eh?]by some process known only to Vastra) protect him and allow him to be a grouchy old miser who refuses to save the world, let alone be bothered by it...

...Sorry. Are we watching DOCTOR WHO? The man who always saves the world starts refusing to...

So. That’s pretty much where we stand as the episode opens. But not to leave him alone in his grouchyness and Victorian hat, the universe has other plans in the form of nasty snowmen who seemingly feed off bad thoughts. Er...yeeaaahh...okay...

Brass tacks.
There are some significant changes to the show that appear in this episode. They appear to stem from the 50th Anniversary coming up in November. These are, I should note, the things I REALLY liked about the episode. The opening sequence and title song are new...and the former even shows the Doctor’s face in the vortex (which hasn’t been done since the 7th Doctor), the later has some nice audio ticks and clicks to hearken to Classic Who. The biggest Classic Who nod here though is most certainly the new TARDIS interior. It’s stark, mainly metal, cool toned (blues, silvers, greens) and is not even a shadow of the warm, scatterbrained, yet inviting interior from his time with Amy and Rory. My feelings on that are that this new interior mimics his own new grumpy exterior, and perhaps even hearkens back to the look of the 5th Doctor’s TARDIS as something he KNOWS, something that comforts HIM....if no one else. Bottom line, I like it and it feels RIGHT for the 50th as a nod to days gone by. He also has new gear, a Victorian look that I’d say probably hits up the style of the 3rd and 8th Doctor’s gear (prior to the 8th Doctor's gear changing recently)...and the glasses-he-doesn’t-need have made a return appearance, which I always liked on Ten, so I’m cool with Eleven adopting them as well.

The last change, but biggest is the addition of the newest companion Clara Oswin Oswald (even though TECHNICALLY this version from the Xmas special isn’t the one he’ll travel with...yeah, I’ll get to that). Jenna Louise-Coleman is a wonderful, heartfelt actor whom I know from previous shows and love her (she can act circles around Karen Gillan). If anyone has a chance to be a really great companion to Eleven, it’s her...now if Moffat would just let her be the caliber that Rose and Donna were on an emotional level...anyways...

The episode’s actual story is totally beside the point. No honestly, it’s not even really there. It’s a by-the-numbers ep that requires nothing much from our intrepid Time Lord to deal with. It’s here only to introduce the new features I mentioned above...and present us with a big bad for Series 7.5 (don’t get me started on him breaking seasons up into pieces)...in the form of Yog Sothoth, otherwise known as The Great Intelligence...a creature from another dimension who can’t exactly enter ours...so uses proxies to do so instead and carry out his will / do his bidding...ah yes, in the from of the eponymous snowmen! So yeah, we’ve not seen TGI since the 2nd Doctor battled it many years ago. And again, part of me sincerely hopes that TGI is a cover and the real villain leading into the 50th will be Omega (another baddie from another dimension, but one with far greater connotations to the Time Lords). I digress. Either way, TGI is voiced by the stellar Ian McKellen and he does a wonderfully menacing job at the role. In the end though the doctor doesn’t really even defeat him and sort of sends him on his brief way from infecting Snowmen and terrorizing children. What astonished me is Eleven doesn’t immediately recall fighting TGI. He just mulls the name over and over saying it "rings a bell". I’m fine with that as TGI is definitely a cool villain and will make for something interesting down the line. But I wonder at his overall arc and how it will tie into the 50th.

But yeah, as fun as the episode actually is, that fun has nothing to do with the story itself, and much more to do with the introduction of all this new stuff. If you go in looking for the new shinies, you won't be disappointed. If you go in looking for a meaty Doctor Who adventure, this isn't really it. It’s like a new show now, and I can’t help but hope that it’s a sign that things will be getting better.

Yes, the Victorian Clara dies at the end, but it’s shown that she is linked to Oswin Oswald (from the future who was a Dalek in ASYLUM OF THE DALEKS) and apparently to a modern day version who will likely be the companion (she is briefly shown in modern day clothes at the grave of her “ancestor” at the end). The trailer talks of the girl who dies twice ect. I’m not buying that she’s another Rory. I think she’s either a Time Lord (possibly Jenny, the Doctor’s Daughter), or perhaps even my theory about her being a regeneration of The Master will pan out. Either way, there is no way she’s a normal human. I don’t know who she is, but I suppose we’ll find out...in APRIL! Again, don’t get me started on Moffat breaking up the seasons...just don’t, it will only end in tears.

THE SNOWMEN is a blast to watch, but it’s not the most substance-filled of episodes. It’s also not Timey-Wimey (I’m actually glad of that to be honest). It DOES, however, have the briefest moment near the end where the Doctor is trying to get Clara to hang on and he promises to save her...the emotion that passes between the two in that minute or so is probably the MOST I’ve seen Eleven bond with anyone since regenerating from Ten. I’m not kidding, that little moment gave me a LOT of hope for the dynamic Matt and Jenna have. I'm hoping for a Ten and Rose style relationship...and if not that, then at least a Ten and Donna caliber one.

So, bring on April now and let’s see if we can’t make this show sing again!

Posted by GunMetalBlue at 7:58 PM