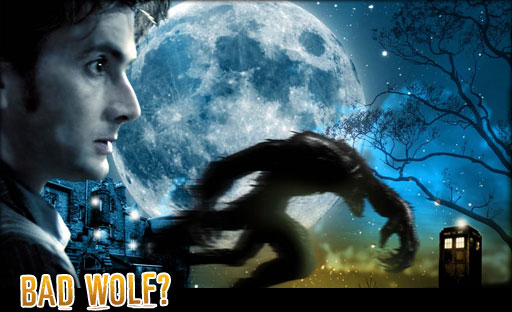 I’ve got more than one of these Re-Watch posts in the bag so I’ll be posting one today and you’ll see another one Monday, after that I will be caught up to the viewing sched properly as we’ve not moved onto the Cybermen two-part arc yet in our Re-Watch.

For today though…TOOTH AND CLAW!

RTD had a theme whenever he started a new Series of DW, he’d do one intro Companion ep, and the next ep would ALWAYS be one that took place in the past (Episode 2’s in Order: THE UNQUIET DEAD, TOOTH AND CLAW, THE SHAKESPEARE CODE, and THE FIRES OF POMPEII) It was just something he did. Now one might argue that of those eps, THE FIRES OF POMPEII is the best…but I think there is more at work in TOOTH AND CLAW than anyone gives it credit for. So let’s dig in shall we?

The Doctor tries to take Rose to a concert in the 1970’s…but miscalculates and they end up in the 1870’s Scotland, not only that but they stumble across a covered carriage that is transporting the Queen herself (Victoria)! I love the idea that the Doctor is like a tornado in time; he attracts big events, people and fixed points like a loadstone, and the Queen is no exception. What’s even more interesting is that they are heading to Balmoral Castle, but are waylaid by a train derailment and end up at a retreat in the wilds of northern Scotland that the Queen’s deceased husband used to frequent called…dun dun dun….TORCHWOOD! Yep, this is the genesis of the future organization and the eventual spin-off show.

Sidenote: Torchwood is an anagram of Doctor Who. Ding ding ding…the more you know!

So the Torchwood estate has, unbeknownst to the Doctor, Rose and the Queen and Co., been taken over by a band of fighting mystic monks set on releasing a creature upon the Queen when she arrives. The creature, revealed just after the credits roll is some type of Werewolf. Cue the best special effects shown in DOCTOR WHO so far, the wolf is wonderfully realized, scary and growly. When the company arrives at the estate the monks disguise themselves as staff and the staff are kept in a sub basement with the creature, who of course escapes and attacks. 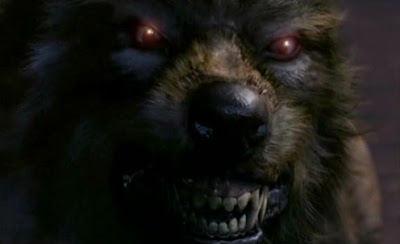 There is a lot of little things in this episode that I enjoy watching. Firstly Rose’s attempts to get the Queen to say her famous line (“We are not amused.”) start off ridiculous and get more hilarious as the ep goes on. It’s one of those moments where you realize just how much FUN Rose has while adventuring with the Doctor.

Sidenote 2: This is something I feel was missing from recent companions Amy and Rory. They never seem to be having fun on their adventures, it’s all business.

Anyways, the Queen eventually obliges and says the line, much to Rose’s enjoyment. There is also the fact that David Tennant gets to use his actual Scottish accent in this episode since he is posing as Scottish Doctor and that must have been great for him, and we certainly enjoyed it. Watching the genesis of Torchwood and why it exists (created by Victoria in the waning minutes of the episode since she realizes that the British Empire is threatened by non-terrestrial enemies as well as terrestrial ones) is always fun, especially knowing where it went down the line. What it began as and what Jack Harkness fashions it into are two different things, and RTD let himself play about in the sandbox history of that.

The dénouement of the episode concerns the fact that Prince Albert was aware of the werewolf threat and had Victoria's famed diamond cut down so it fit into a telescope device in an observatory on the estate as a key component that would send the werewolf (which was actually an alien creature of light who was trapped on earth) gracefully into death forever. The etsate was designed in the past by the Earls father as a trap to catch the beast and set it free. It also shows us that in the final battle with the Wolf before subduing it, Victoria was bitten and the Doctor explains that her line always and forever after that had a blood abnormality (this is a truth on historical record actually) that no one could figure out. RTD made Queen Victoria and the current line royalty…part werewolf. THAT is super cool. 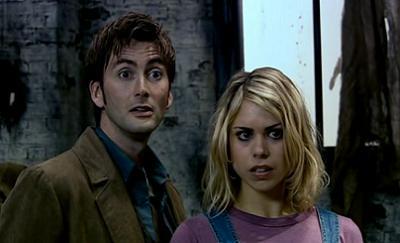 One of the more emotional moments in the story is when the owner of the estate, Sir Robert, after having begrudgingly let the Monks trap the Queen in the house for fear of what they would do to his family, sacrifices himself to save them, buying them time in the observatory room and preparing the device. It’s a small moment, but I always love how RTD can help redeem people. Even though he wasn’t a villain, Sir Robert made a mistake in allowing the Monks to get as far as they did and that made him a touch cowardly. Well the redemption in death allows you to walk away from the episode and not think poorly of Robert for nearly betraying his monarch. That’s kind of a big feat for a paragraph in a script to accomplish, as he could have just as easily allowed Robert to live and written his transgression away by reason of needing to save his family, no matter the cost. RTD takes the tougher route in the narrative flow and makes it look easy. Bravo sir.

There’s lots of comedy, action and dramatics in this episode and it just seems like the cast and crew had a blast making it. Great ep!

Posted by GunMetalBlue at 8:13 AM