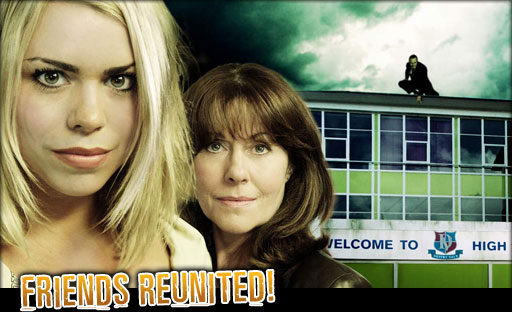 I recall when we first got wind of the fact that Series 2 Episode 3 of DOCTOR WHO was going to star Anthony Stewart Head (Giles from BUFFY, and Uther from MERLIN) in a villainous role (yes, even back then I was looking up rumours and spoilers about the forthcoming series) I was super excited.

Then I saw the Next Time Trailer after TOOTH & CLAW.

I grew up watching the 4th and 5th Doctor’s (as I’ve mentioned), so seeing two of my all time fave characters from Classic DW return in the new one. Oh man, that was going to be awesome!

There I was just assuming that having them on the show at all would be boon enough, but no, RTD and writer Toby Whithouse (everyone’s favourite BEING HUMAN creator) decided not to just shoehorn them in for the sake of it, but use them to deal with latent issues that bubble under the surface with the TARDIS crew. But I’ll get to that later.

SCHOOL REUNION is a very DW type story. Alien bat-thingies (Krillitaines) have body-snatched teachers at a middle school and are feeding the children chips with special oil that makes them super smart, and then sit them at multiple computers working on a scientific theory of everything which would eventually allow them control over all time and space. Nasty buggers, the Krillitaines are creatures of scavenging who take the best features they find of each race they conquer. The Doctor, Rose and Mickey aren’t having it and set out to stop evil Giles and his cohorts.

So let’s examine the key bits about this episode above and beyond the main plot devices. First up Rose, for some reason, was under the obtuse assumption that the Doctor has not travelled with other companions. There was a pretty funny one page web comic going round that had a long line of people showing ALL the previous companions since Susan, ending in Rose shouting “You said I was special!” which I always got a chuckle out of. It’s pretty much illustrated here in Sarah Jane’s arrival and reunion with the Doctor (albeit 5 bodies removed from the one she recalls). He has to basically explain to Rose that there have indeed been others and while SHE could travel with HIM forever if she chose to, because of his long life he could NEVER travel with her for the rest of his. It’s quite a sobering moment actually and was probably like a bucket of cold water on Rose. So she really has to come to grips with his ageless life, the lonely god, and why he has to live how he lives. I like to think that Rose is accepting of the fact that she wasn’t the first and won’t be the last and hopefully she doesn’t begrudge him those relationships. But to be honest, Rose’s track record in the selfless department isn’t exactly stellar. She has spent the last few major revelations growing as a person to be less the selfish person she was when she began this, but I don’t think at this point she was quite there yet. 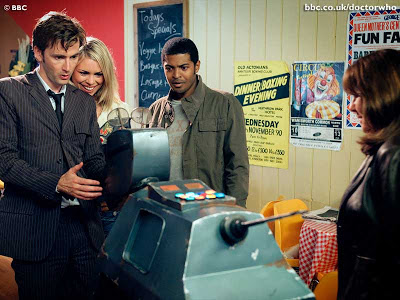 Secondly, we get my favourite development in this episode. The reappearance of K-9 (Mark III for those of you counting) causes Ten endless joy as he’s overjoyed to see his old faithful companion again (Last seen leaving the 4th Doctor with Sarah Jane), but in Mickey Smith it’s a head-smacking revelation. In the TARDIS crew he’s known for a while he’s kind of a third wheel when it comes to the Doctor and Rose’s budding relationship. It’s something I’ve never held Rose as accountable for (her treatment of him) as others have since Mickey begins his DW life as a lay about who would rather go down the pub and watch footie than spend time with his (at the time) girlfriend Rose. Her progression to love another man is as much a result of Mickey’s aloof treatment of her as it is her own selfishness. Mickey knows this, and has seemingly accepted it. It’s here that he comes to the realization that he’s the latest TARDIS crew’s version of the Tin Dog. He’s K-9 2005, just a human one. It’s the kind of moment that in anyone else would make them furiously angry, but I think Mickey should get points for not immediately responding that way. Be the time the episode ends we are shown that the Doctor doesn’t look at K-9 as just a Tin Dog, but as a valued and important member of the team. He’s a friend and he’s not as disposable as Mickey assumes him to be. In fact, Ten’s more then gentle treatment of K-9 when he is hurt proves to Mickey that even though Ten refers to him as “Mickey the Idiot”, he’s a friend. He’s trusted. He’s important. He’s so much more than a Tin Dog.

The TARDIS crew obviously stops the Krillitaines, and the Doctor has to say goodbye to both Sarah Jane and K-9 yet again, but again we’re given the secretly building plot of Rose and Mickey and their own inner growth. It’s truly nice to spend S1 and S2 watching Rose and Mickey go from on-the-rocks lovers, to spiteful exes, to begrudging companions to finally (down the line) inseparable platonic friends. I think it was RTD’s plan all along to set them on that journey and SCHOOL REUNION is certainly a big link in that chain of events.

All in all, a wonderful episode for modern and Classic DW fans alike. There is plenty to enjoy in the main story, and plenty more to examine in the deeper character stuff. And what’s especially interesting is that the Doctor, aside from some ex-girlfriend, new girlfriend moments of awkwardness, is kind of in the background allowing the guest stars and other protagonists a chance to shine all on their own.

Next Time: Steven Moffat’s Hugo-award winning episode THE GIRL IN THE FIREPLACE takes place both in Space and in 17th Century France!

Posted by GunMetalBlue at 7:46 AM