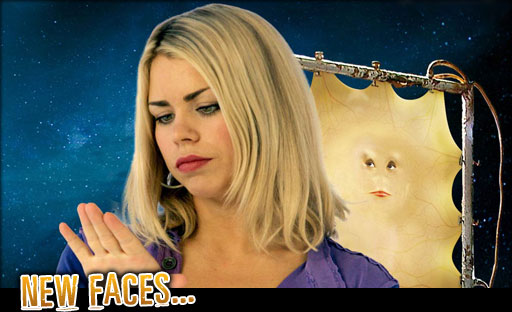 I just realized that what with the latest Series of DW (7) and my attendance of TIFF, there has not been a new DOCTOR WHO RE-WATCH post since June. We left off with the 2005 Christmas Special (THE CHRISTMAS INVASION), which aired prior to Series 2 proper and handled the immediate post-regeneration of the 9th Doctor into the 10th. We got past Rose’s initial upset over losing the 9th when she sees what Ten has up his sleeve for the adventures. And here...we...go...

I’ve always said that RTD’s skill is his storytelling and characters, and this episode is especially clever because he plays the long game with us and re-introduces us to The Face Of Boe. He is a big giant head with tentacles inside a large liquid filled container, whose implications to the series down the line are great once you get there. For now though he is a big mysterious head with information about the Doctor that he doesn’t have yet. He has a message for him, but knows that it can wait till the next time they meet, which he posits will be their last meeting. Knowing who the Face Of Boe is, and what he represents makes seeing him here (and then again in S3) just a joy to fans.

The episode actually acts as a quasi-sequel to the S1 episode 2 (THE END OF THE WORLD) as it brings back another person from that episode, namely the villain Cassandra. You recall her, the last human, the big piece of stretched skin on a frame who needs to be constantly moisturized. Well, turns out she survived her apparent death in S1 by using skin from her ass. Both Cassy and Boe are in a future hospital where powerful ailments are cured, and are administered to by a set of human cat nuns. Yep, human cat nuns! Did I mention DOCTOR WHO was awesome?! The Doctor and Rose arrive to find that diseases the Doctor considers incurable are being not only treated but cured. He smells a rat and the two quickly find out that not all that’s going on at the hospital is above board, and the human cat nuns are harboring some deep secrets. So if Cassandra’s not the villain, how does she fit in you ask? Well that’s easy, she brings a lot of comedy in her attempts to swap bodies to get a new one and live a new life, including both the Doctor and Rose’s bodies for a time. When she takes over Rose’s body, she unbuttons the top buttons and allows the cleavage to spill out. Cassandra is a bit randy it appears. Which takes us to her kissing Ten and giving the shippers something to strive for goal-wise. 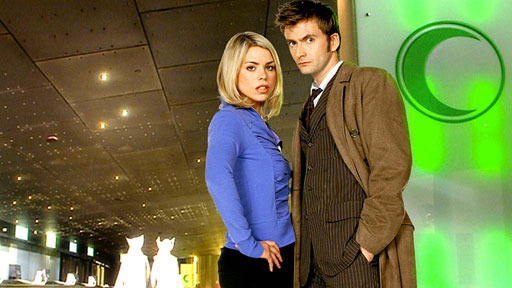 What RTD does best here (other than inure Rose and Ten to each other from moment one and give us a solid diatribe about the evils of “a means to an end” going on in the hospital)…is he gives his previous villain closure. Cassandra jumps around bodies and eventually ends up in that of her assistant Chip, who willingly allows her to inhabit his body. But since he’s a clone the body begins to fail with a real human soul inside it, leaving Cassandra to finally have to confront the death she’s been avoiding all these years. In one of RTD’s perfect moment’s of clarity the Doctor decides to do a final favour for Cassandra, and takes her back into the past on the last night that she recalls someone calling her beautiful. The Cassandra-In-Chip’s-Body goes up to her younger self and tells her just that before finally dying in her younger self’s arms. It’s this kind of moment that RTD (and even sometimes Moffat) are good at. Here we have the villain, a woman who caused no end of heartache and almost destroyed an entire space station, and followed that up with body switching in an attempt to STEAL more life from others…and the Doctor gets right to the root of her, who she is and what makes her do the things she does. Then he makes this magnanimous gesture and allows her a moment of peace and love and beauty before she passes away. It’s interesting how we all rattle on about how the Doctor’s anger is something to behold, a terrible, shadowy growling god and if you get on that bad side you can be dealt with very harshly. But here’s where these men writing this character understand him best. His love, his compassion, and his benevolence even to his enemies (both The Master and even Davros receive this treatment as well) is a far more stunningly powerful thing to observe. Watching quiet moments like this actually make me want to be a better person. Here’s a very lonely man who COULD, if he chose, allow that loneliness to eat him up and leave only anger and bitterness…but instead when he lets love in he can be the proudest, glowing paragon of truth in the universe.

And I love that about him.

The main issue at hand, that of the nefarious way that the hospital nuns are curing diseases, is poignant as well and results in some of that anger I mentioned above, but when you finish the episode you will definitely take more away from the Cassandra plot line, and I think that was deliberate on RTD's part. Again, the man is a stellar writer and episodes like this showcase it.

Tennant gives everyone an absolutely incredible performance in his first proper episode. He’s note perfect. Watching NEW EARTH is like a window into the man we know will become voted the best Doctor ever in history. A boy who grew up watching the 4th and 5th Doctor’s himself, comes to play the character and absolutely knocks it out of the park week after week. Well that all starts here, with that quiet moment at the tail end of this episode.

Next Time: Queen Victoria is “not amused” in TOOTH & CLAW!
Posted by GunMetalBlue at 7:09 AM