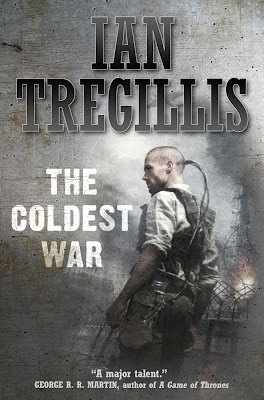 Someone is killing Britain's warlocks.

Twenty-two years after the Second World War, a precarious balance of power maintains the peace between Great Britain and the USSR. For decades, the warlocks have been all that stand between the British Empire and the Soviet Union-- a vast domain stretching from the Pacific Ocean to the shores of the English Channel. But now each death is another blow to Britain's security.

Meanwhile, a brother and sister escape from a top-secret research facility deep behind the Iron Curtain. Once subjects of a twisted Nazi experiment to imbue ordinary humans with extraordinary abilities, then prisoners of war in the vast Soviet effort to reverse engineer the Nazi technology, they head for England.

Because that's where former spy Raybould Marsh lives. And Gretel, the mad seer, has plans for him.

As Marsh is drawn back into the world of Milkweed, he discovers that Britain's darkest acts didn't end with the war. And as he strives to protect Queen and country, he's forced to confront his own willingness to accept victory at any cost.

Last week I read what is definitely the best book I read in all of 2012. I thought I’d read something special when devoured Ian Tregillis’s first book in his Milkweed Triptych series BITTER SEEDS. Now, if I thought that was good then the second book, THE COLDEST WAR, showed the first book to be the opening salvo it truly was in what is an ever-twisting, addictive and endlessly readable series.

THE COLDEST WAR is quite an amazing feat. The premise of the first book (Battery-powered Nazi Superpeople going up against British Warlocks who summon Lovecraftian demons/gods in their defense through blood magic) is taken and not only expanded upon, but perfected. Here we have a volume that takes place 22 years after the first book. The Cold War is in full swing and Britain is attempting to find ways to circumvent the Soviet Union’s seemingly unbelievable secrecy and power, while maintaining Milkweed’s secrecy. Unbeknownst to them they have an informational mole and in the first chapter, someone with similar powers to the Nazi Superpeople from the first book is systematically hunting down British Warlocks.

Immediately you will be aware of the “generational” nature of this tale. Here we are dealing with events quite removed from WWII, the protagonists have aged, as have the villains and the world stage growth is also evident. Milkweed itself is no stranger to this growth, but in a way that is not conducive to protection. With 22 years and the deaths of the higher command in Whitehall, Milkweed is now run by those who were just children during the Blitz and there is now a lackadaisical sense about the place. Complacency if you will. Now, while they are still actively doing things to further the cause, it is unavoidable to see the lax nature in comparison to the blacked out windows and hush-hush secrecy of the 40’s. I enjoyed that aspect of the narrative, as it helps you feel the 60’s and how Britain recovered from the War. An interestingly enough the mystery (while a different one from BITTER SEEDS) is still so thick that you can barely see through it with a map. I loved that, as the twists, when the come, are fast, furious and hard to guess at. Tregillis masterly handles his suspense without sacrificing pacing.

Having the protagonists older and showing how their lives carried on after the War is key to the enjoyment to this book, but the biggest part of that is this was never a “Happily Ever After”. Both Marsh and Will carry scars that never healed and in some cases are still festering. Watching them begin to relive their years at Milkweed and the deeds that can be placed at each’s feet is as interesting and compelling to read than any of the mysteries in THE COLDEST WAR. There is a wonderfully bleak realism about the way these characters interact with each other and how the crimes of the past are revisited on them ten fold. Once that Pandora’s Box is opened there is seemingly no stopping it as the hits keep on coming. Marsh and Will’s relationship is developed further, but it’s actually on the tail end of some very serious rifts that began in BITTER SEEDS and bloom into full flower here and again it’s one of the best relationship-goes-sour I’ve seen in print. It all rings incredibly true. Every time one of the two contests something to the other; you can actually take a side without stretching your own beliefs. That in turn creates a number of very creative moral dilemma’s as well which only adds to the narrative.

Another aspect are the things that Marsh and Will don’t know about each other, the biggest thing being that Will has kept secret just how badly things could have gone in the end of the events of BITTER SEEDS had he not done the thing he did. It’s that aspect of his motivations for what he does in the 2nd book that Marsh is unaware of, and the tension that creates as we go along is palpable.

There is some foreshadowing in BITTER SEEDS about a major component of THE COLDEST WAR’s story, but even with that foreshadowing when the revelation came in this book I was taken unawares and the gravity of it made the hair on my arms stand up. It was absolutely chilling and I truly think that it’s probably one of the more creepy things I’ve ever read in a book.

The German’s in BITTER SEEDS, most importantly the men and women of the Reichsbehörde, in that book come across as evil tools of their creators, but it made them no less evil in their actions. But there was always the inkling that Klaus (at the very least) was not inherently bad, but rather just a victim of circumstance. That is developed further here when he and Gretel see London and Klaus becomes obsessed with how free everyone is to just “live their lives”. It’s something that he’s never had, and he wants it. In his past life as a Nazi Super-GhostMan he might have just taken it if he wanted it, but here the growth in him allows for him to accept that it is something he might have to work for. This is most evident in a desire to paint with watercolours, at which he has to start at the beginning and work at it every day to be good. People are kind to him for the first time, and I think especially his relationship with Marsh is specifically emotionally affecting.

Gretel is still utterly FASCINTATING. I could not wait for stuff to do with her on each page. She is an unreadable riddle most of the time. Is she evil? Mad? Good? Benevolent? Driven? Loving? Dismissive? Yes, she is all of these things and none fo them. She is the heart of this entire trilogy and yet she isn’t at the same time. Tregillis has infused Gretel as the blood that feeds his story, but she is not what pumps it. That is Marsh and Will.

The vaguery of the Eidolons themselves is still this omnipresent menace that while somewhat leashed in the first book, spends the first half of THE COLDEST WAR haunting the edges of the reader’s sensibility. The success of them as characters works because of the nature of them in this very oppressive, dark way that will give even the most stalwart reader the willies. I think any time they showed up in the story I had to prepare myself.

Now, the third act of this novel will most likely do to you all what it did to me so I’m not going to spoil it. At all. I’m not even going to give you the slightest hint. What I will say is that the dénouement in THE COLDEST WAR is probably one of the finest, cleanly assembled things I’ve had the pleasure to read. It made my jaw drop and I actually turned to my girlfriend who was sitting across the couch from me and I said aloud “Holy gods. That was phe-no-men-al.” in a very serious voice. Right to the last sentence. Gobsmacked. Impressed. Yes, I’m aware I’m gushing. This is a gush-worthy book. It’s the kind of novel I will tell my friends about and discuss after in hushed whispers so as not to spoil it for others. What’s even better? There’s a 3rd book coming in April called NECESSARY EVIL and will finish out the trilogy. I personally cannot wait for it. I put it on my pre-order list and I will disappear into a book-reading fugue the day it drops.

The best book of 2012. THE COLDEST WAR. I don’t care what you have to do to get your hands on this book. Beg, borrow, buy, read it in snippets over someone’s shoulder. Just go out and grab a copy today. And if you’ve not read BITTER SEEDS yet…what on earth are you waiting for?

Ian Tregillis’ Milkweed Triptych is an enthralling historical epic full of twists, turns, believable characters and stellar set-pieces. It’s got chills, spying and action aplenty, all executed with the type of prose in which you know that not only every sentence, but every word was chosen deliberately and serves a greater purpose.

READ. THIS. SERIES. NOW.
Posted by GunMetalBlue at 8:06 AM