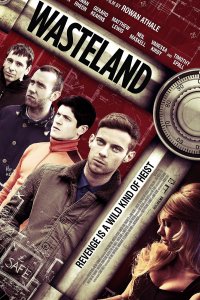 Ever since I saw LOCK, STOCK & TWO SMOKING BARRELS years ago I have found that certain British directors really have a great grasp on what exactly makes a gritty, and interesting heist drama.

With WASTELAND by director Rowan Athale I have found another film to love in this genre. It’s compelling, well-told in the non-linear style that usually works best in these types of films, and acted with verve by the young cast (Luke Treadaway, Iwan Rheon, Matthew Lewis, Gerard Kearns, and Vanessa Kirby) with an old British favourite anchoring the cast (Timothy Spall).

Basically this is the tale of a young man named Harvey who gets out of prison (from a drug possession rap he was set up for), and sets about gathering his friends into a scheme to rob the REAL drug dealer / local thug boss who set him up to begin with, while trying to not piss off his old girlfriend who’d rather he didn’t get himself into trouble.

While it’s a simple tale, the non-linear storytelling, the impressive acting of the cast, and actually the cinematography which captures the Yorkshire town it takes place in truly well make it really soar.  The cinematographer makes every shot beautiful, but in a wholly gritty way. I watched as the shot choices frequently appear behind the actors as they walked (allowing us to identify the actors through their jacket design and the back of their heads), and wide shots were designed in a picturesque fashion to maximize effect on the audience. I found one particularly well-filmed scene where they had the young men scattered in different positions around a rusty children’s playground as they argued to be quite well done.

In the end the film is definitely carried by the performances though and you will care about the story as well, with Treadaway teasing that something is not quite correct as he relates his story to Spall’s police detective character. The group of friends actually act like friends would (as opposed to actors attempting to make it seem real). They argue, make comments and behave like good friends would when in extraordinary circumstances. It adds a level of realism to the proceedings that I found quite refreshing.

Great stuff, and well worth your time when it hopefully drops internationally.
Posted by GunMetalBlue at 7:35 AM