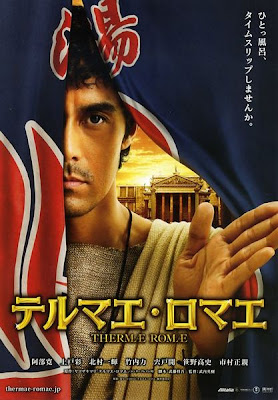 This is a tough one for me. I REALLY, really wanted to see this. A fish out of water comedy where a roman bath architect finds a secret passageway from 124A.D. Rome to modern 2012 Japanese Bathhouses and starts to steal the future’s ideas to appease his own Roman superiors. What’s not to like?

Well, as it turns out, nothing was not to like. It’s charming, funny, and well acted across the board…

As an Anime fan (and knowing this was based off of a very popular Manga series) I kept thinking throughout that it could have been even better as an Anime rather than a live action film. It has all the bells and whistles and hallmarks of what makes comedy anime so great…but here I the live action version it began to be a little…overwrought? It also begins to be a BIT repetitive and predictable in the second hour. Once you’ve worn off the novelty of watching Lucius react to modern things like food and drink he’s never tasted, or thinking this “flat-faced clan” (he believes that the future is actually just a slave version of a bathhouse) is superior in their methods of bath-houses, it just ends up ringing a little falsely the 3rd and 4th time they go for that comedic beat. Another thing I noticed is that when the love interest from modern Japan, Mami (a struggling manga artist looking for a muse), ends up in ancient Rome the whole thing that makes her so charming falls apart. She ends up resigned to plot-device-rescue territory and I felt that was really unfair to her character. She was the best bit about the modern world storypoints and every time she was on screen I was overjoyed…but once back in Ancient Rome I just felt bad for her as a character.

Like I said, it’s a good film, and there’s plenty to like here, but it’s not anything that couldn’t have been done better in Anime. The second hour is a lot of been there, done that with a rescue tagged in for good measure.

Don’t get me wrong, I’m really impressed that the programmer’s chose such an offbeat Japanese comedy to be a Gala Presentation, but a big part of me thinks that KEY OF LIFE (which I’d seen earlier the same day) deserved to be there more I guess if we were choosing Japanese comedy films. And maybe having seen and been so charmed by KEY OF LIFE made me react the way I did to THERMAE ROMAE.

You will enjoy the film, laugh and be charmed (especially by the lead and the older Japanese bath house users) by it…but I can’t help feeling that it could have been something better in the end.
Posted by GunMetalBlue at 7:37 AM