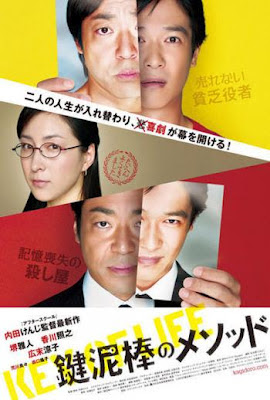 I’d never seen a film by renowned comedy writer/director Kenji Uchida, though I’d heard he had a deft hand at the genre. So I was quite intrigued to see KEY OF LIFE, and thankfully I was pleasantly surprised.

It was a great film, and one in which I laughed loudly many times. It was also full to brimming with heart, charm and sensibility…even though it’s technically a black comedy.

The main characters (played pitch perfectly by Masato Sakai, and Teruyuki Kagawa) Sakurai (who wishes to kill himself but can’t and lives in near poverty) and Kondo (an assassin who lives the high life, but is seemingly bored by it) end up accidentally switching lives when Kondo slips in a bathhouse and thunks his head producing amnesia prompting Sakurai to take it upon himself to steal the assassin’s clothes without realizing what he’s gotten himself into. The events that follow are hilarious from minute one. Rounding out the cast is Kanae (Ryoko Hirosue) who is a terribly nerdy magazine editor looking for a husband to marry by a certain date (which she announces as "I'm getting married" to her co-workers). She’s hilarious. The film opens with her and I was almost falling into the aisle gut laughing at her antics. Perfect comedy timing on her part.

The film actually takes a bunch of turns I wasn’t expecting and ended up being far more refreshing than it had any right to be based on the premise. It was written skillfully, and directed even better. The acting was great across the board (like I mentioned above) and I could not think of a better qay to spend two hours early on a Saturday morning.

See this film when you can get your hands on it. It’s about as charming a film as I saw at the whole of TIFF this year. Loved it!

Posted by GunMetalBlue at 7:32 AM