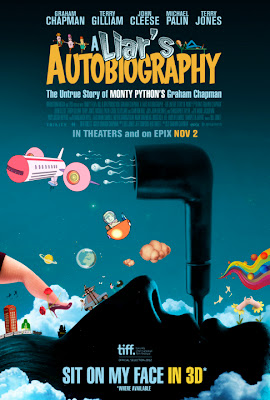 I am now and always have been a BIG Monty Python fan, whether it was the films, the show, the skits, the songs...I loved it all, and usually laughed my tail off.

Sadly, this film was my first stinker in my TIFF films this year. In fact it was such a stinker that I walked out. That's right, I never saw the end. Quite frankly I recall sitting there, 3D glasses on, sighing at the most recent attempt on screen to combine one of 13 different styles of modern animation with audio Chapman had recorded before he died from his quasi-fictional autobiography and thinking...."I'd much rather be home watching TV", and isn't that kind of sad?

Actually Self-Indulgent Mess is the best way to describe it. The intention here was altruistic, but the end result is choppy, strange and mostly lame.

Utilizing many different styles of animation (some of which were quite nice, while others were kind of bland while still others were downright abrasive to the eye), the narrative basically seems to shift between truths and untruths about Chapmans's life, the audience needing to weed out what is what on their own. Based on a book of the same name (from 1980) and cobbled around recordings made by Chapman himself of the volume mere years before his death, LIAR'S seems to be trying to be something. I can understand the want to make the book into a film, but perhaps something is lost in the translation? I found the only things I laughed at were snippits of classic Python bits, and when the film was seemingly trying to deal with the serious side (like Chapman's apparent alcoholism) you almost want it it to be a proper documentary instead, the jarring animation and chaotic nature of that segment stole the relevance of the section for me.

I guess to put it in a simpler way I'd rather have watched a full out, serious documentary about Chapman, or a balls out, ridiculous faux-mentary (ALA Spinal Tap or the Rutles), or even to read the original book itself and not watch the "in-between" mess that was presented tonight. Now, that may be personal preference, but I simply could not connect with the film and I walked out at around the 50 minute mark. Perhaps that makes me ineligible to "review" it properly, but I did want to get some words down about my experience.

LIAR'S feels like a bold attempt to realize a film version of Chapman's book, that may fall on deaf ears for those who feel it's too disjointed and bizarre to actually enjoy. I kept feeling like there were parts that were QUITE enjoyable, but then the next section would make me lose total faith in the enterprise. I actually waffled on walking out at least 3 times before finally doing it. That should tell you there Is something here...but I don't feel it's enough.

I think if you wish to know about this tale, read the book itself and let your mind do the imagery.

It's not a good film for anyone except perhaps Chapman's friends, family and Co-Pythons. The rest of us are found watching an unfunny, kind of plodding, uninteresting movie that never allows itself to be anything special.

Posted by GunMetalBlue at 9:30 PM