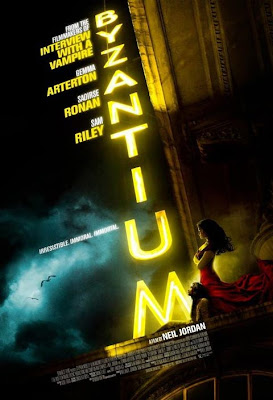 My affection for fantasy stems from some early childhood film experiences. I was deeply affected by both Ridley Scott's LEGEND and then later by Neil Jordan's THE COMPANY OF WOLVES. The lavish attention that both Scott and Jordan approached their source material with, the absolute beauty that they found and placed on screen left somewhat of an indelible ink on my skin. THE COMPANY OF WOLVES took my love of fairytales, made it real and couched it in brilliant colours, darkened themes and haunting imagery.

A number of years later the very first film I saw as an newly minted 18-year old (and legally able to attend R Rated films in Canada) was Jordan's adaptation of Anne Rice's INTERVIEW WITH THE VAMPIRE. Jordan took the subject matter and brought it to the screen in a way that I don't think many others could have. He did it with style, drama and grace. I think it was around this point that I started actively seeking out his films to see and he joined a canon of directors I still love to this day.

Jordan's latest, BYZANTIUM, I am very happy to report is in fantastic company with those two previous supernatural / fantasy films. This fits perfectly beside those two, but I think it also rises above them as well. It's as if Jordan has perfected this type of genre drama. The bottom line is, I quite unabashedly adored BYZANTIUM. Every. Single. Minute.

The story is a simple one, a mother and daughter on the run from something in a previous town end up at a seaside English town, and try to hide the fact that they are both vampires whilst surviving amongst the unknowing populous. The mother, Clara Webb (played vibrantly by Gemma Arterton), works, as she has for over 200 years, as a prostitute to support her daughter Elenore Webb (played exquisitely by a scene stealing, tour de force who goes by the name of Saoirse Ronan), while also trying to keep her past hidden and at bay from Elenore. As was mentioned by Jordan in the Q&A afterwards, the on screen chemistry between Arterton and Ronan is a perfect concoction. Arterton is all fire and tense vibrancy, while Ronan is the very model of stillness and solitude. The two on screen together are simply wonderful to behold. That's not to say the peripheral players don't leave a mark on you, as with most Jordan features they most certainly will, from Caleb Landry Jones portrayal of the sickly, and intense Frank, to Sam Riley's portrayal of one of the two who hunt Clara and Elenore for breaking the rules, and even the dastardly, villainous role that Johnny Lee Miller plays is affecting. As one of my friends said, in Jordan's films you always feel as if each of those peripheral characters has their own side story that would be fascinating all on its own.

The production design, costuming and cinematography are all utterly sumptuous, lavish and with a combination of grim and colourful that is balanced on a knife edge. A setting on a rocky, black basaltic island filled with bats and slick rocks becomes something altogether more haunting when Jordan adds splashes of colour to it. It's one of his telltale skills as a director to do this, to make the place be as important visually as the characters, and even the narrative itself.

Now, is it a complex story? Not really. But as I commented to my friend afterwards...anyone can come along and make a vampire film (and there have been many recently), but only someone like Neil Jordan can come along and release one within the current glut of vampire films and say "Look, Here, THIS is how it's done." And that was how I felt watching this. An absolute master of the supernatural and surreal comes along and schools every other vampire movie about what it is to frighten, to display nightmarish storytelling, to bring a level of quality to the drama, and basically to return an ancient vampire and death mythos to its basic fairytale roots. What he gives us in BYZANTIUM is entertainment that makes you wonder and behold. This  is something he has always done for me, ever since I was a nine year old kid and first laid eyes on his nightmarish Little Red Riding Hood tale (which I freely admit might have been too adult a subject matter for me at the time).

BYZANTIUM is definitely one of the very favorite screenings of TIFF so far. Go see it when it comes out wide. No seriously. Just do it.

Posted by GunMetalBlue at 12:40 PM