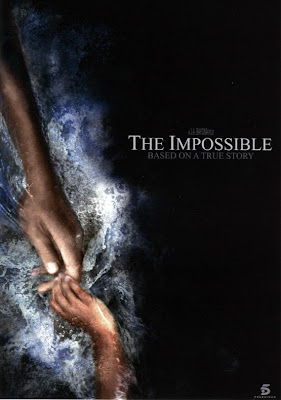 I am so glad that TIFF allows me to see something as spectacular as this film early, so that I can go off and tell everyone that they need to see it. THE IMPOSSIBLE is one of those films.

The 2004 Tsunami is one of those events in my life that I was old enough to be truly affected by, and also one which I vividly recall from the news footage and stories that rose up out of the aftermath. It was one of those moments where our planet shrugs and we realize just whose grace it is by which we live on it. It was a horrific tragedy that tore people apart, brought them together, and as the director himself (J. A. Bayona) said after our screening, "wiped away race, country and all else"...reducing those people affected directly by it to simply...human beings trying to survive.

The narrative focuses in on a family vacationing in Thailand at a beach resort, and when the tsunami strikes without warning they are ripped from the resort on chaotic tides that destroy nearly everything in their path, and a passing tree branch can spell horrific death as easily as a wrecked car can. The  family (played to perfection by Naomi Watts, Tom Holland, Samuel Joslin, Oaklee Pendergast, and Ewan McGregor) not only have to survive the initial wave, but also have to attempt to survive wounds, separation and despair after the fact. These specific events are based on an actual Spanish family, and that fact makes the story pluck a louder chord with the audience.

I want to call special attention to Tom Holland who plays the eldest son Lucas who utterly carries the film on his shoulders. As big as the name stars are, Holland's present and stripped bare performance coupled with his on screen chemistry with Naomi Watts (who plays his mother Maria) just makes him shine. Enough that people in the audience commented on it repeatedly, echoing what we were all thinking. Speaking of Watts, who is always very good, I do believe she's turned in an award-worthy performance here. Both she and McGregor are able to translate the role of not only parents dealing with separation from their children, but from each other. It was also noted in the Q&A that some of the extras in certain scenes were REAL survivor's of the 2004 ordeal, and that the hotel that they shot at in Thailand was the very same hotel that the family stayed at.

Now, Spain has been hiding something from us. This is a Spanish production (first and foremost), but the country has apparently been hiding their secret weapon screenwriter Sergio G. Sánchez, because this man can WRITE! I attended another film (see my review for FIN (THE END)) that he wrote and consider me just blown away by his ability with crafting subtlety, poignancy and true feeling. As someone pointed out in the Q&A to him, EVERY SINGLE emotional moment is totally, unforgettably earned. This is a tough thing to do and Sánchez needs to be truly proud of how he accomplishes this here in THE IMPOSSIBLE. I am certainly not afraid to admit that I sobbed at least a few times during the screening and from the sniffles and eye-wiping that was occurring around me I am pretty sure I wasn't the only one. The second part of that equation is definitely the direction, and Bayona proves that his debut film (THE ORPHANAGE) being so well-received was not a fluke, THE IMPOSSIBLE is the real deal. It's an important event, and the aftermath especially is something we need to pay attention to. Bayona approaches each shot and scene with the same verve and quality, but with an unforgettable viscera that will haunt you long after you've left your seat. The carnage, bone cracking and blood spurting, is not shied away from, but that direction allows us to FEEL the event ourselves. Bayona throws you into the 2004 tsunami as much as he can do from a theatre seat. It's difficult, tense, and seat grippingly real.

So far, if I were to choose a favourite film of the festival so far it would most certainly be THE IMPOSSIBLE. It is magnificent, and will continue to affect me for a while yet as I'm truly still trying to process it all. I do believe it will be out this winter in North America, and I really think everyone should get out to see it. THE IMPOSSIBLE is an absolute home-run, and further evidence that the Spanish film industry is a force to be reckoned with.

Posted by GunMetalBlue at 4:10 PM