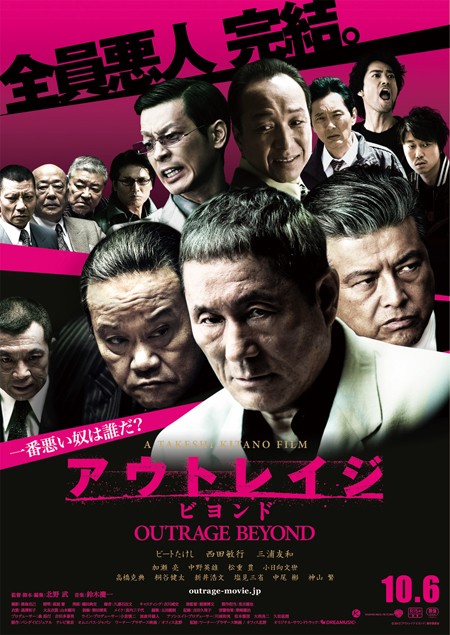 What’s interesting about Kitano is that his output has gone on a wave, beginning with violent yakuza stuff, then drifting into the thoughtful stuff, then into kind of inner eye surrealism, and then with OUTRAGE he’s drifted back into violent yakuza films again.

What immediately jumps out with OUTRAGE and it’s sequel OUTRAGE BEYOND is that Kitano is seemingly tired of the genre…but in a good way. Basically these two films are scene after scene of a bunch of suited yakuza bosses, underbosses, soldiers and thugs spitting line after line of bravado and dialogue at each other interspersed with bright, garish, visceral violence. There is really not much else to either film. Yes they follow a story progression, but even that seems to be a side-car. What makes the films compelling then? Well Kitano’s statement about the actual yakuza themselves. This antiquated crime lord system that exists in the safest country on the planet, in which the old guard do things a certain way, and the new guard do things in a different but no less surreal way…and neither of the sets of guards has the first clue how backwards it all is.

In what is essentially the Japanese version of a Scorsese mob film, OUTRAGE BEYOND basically is a cautionary tale for the elite crime syndicate. It shows how you cannot go against the boss, and if you do and take the boss spot for yourself, there is always someone wanting to take that from you. It’s a constant ebb and flow of a rat eating its own tail. Up and coming mobsters want to make a name, older mobsters want to keep power, and everyone in between is scheming in some way. It’s basically an organization you join if you are looking for a quick and violent demise. And isn’t that utterly ridiculous. That is the point I think Kitano is making here. These men in these rooms spitting bravado and insults at one another mean less than nothing to the outside world. The rest of the ball keeps spinning while these tools set about killing one another for power that really is a figment of their imagination.

And THAT is why Kitano is such a master.

If you can’t tell, OUTRAGE BEYOND was excellent.
Posted by GunMetalBlue at 7:28 AM