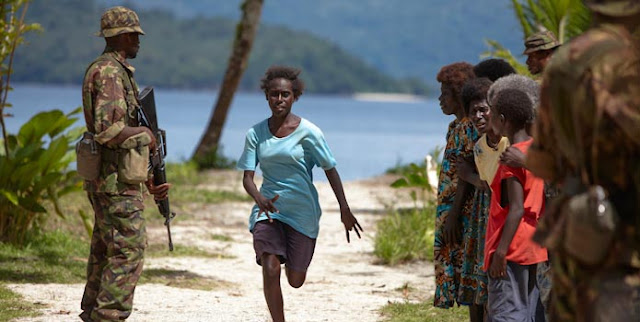 When one thinks of the films of Andrew Adamson, the first ones that come to mind are the SHREK movies and the first two NARNIA films, but his newest feature, starring British thespian Hugh Laurie is a different bag altogether, and the step up is impressive. MR. PIP is one of those films that will have you thinking about it long after. You will revel in the fact that you enjoyed it, that you were disturbed by it, but mostly that it was a VERY relevant story about a VERY real situation that happened, that through our own hubris, Western society was the cause of. No matter how much we wish to look the other way, the cause of this strife was a copper mine in Bouganville near the isle of Papa New Guinea. That makes this an important film. But what really made it sing was the fact that it was beautifully shot, but at the same time utterly visceral and difficult to stomach. We are certainly not used to seeing such things and being aware of the fact that they take place on this planet, even though should be front and center to those of us in the west who take something as simple as "copper" as a given, when it's really not.

The story takes place during the real life strife in the 1990's between Papa New Guinea and Bougainville Island, with a British teacher who brings the words and lessons of Charles Dickens GREAT EXPECTATIONS to the local Bouganville population (children and adults alike), but the PNG militia has other ideas. At times very hard to watch as it is very visceral and real, MR. PIP is a brilliantly realized piece of film-making. Andrew Adamson proves himself to be more than a family film type director. During the Q&A Adamson revealed he grew up in Papa New Guinea, so the subject matter must strike extremely close to home and that resonated for me. Every ounce of blood and sweat was poured onto the celluloid.

Laurie is absolutely wonderful in his role as Mr. Watts (Pop-Eye), but it's Xzannjah Matsi, and her real life mother (as well as movie mother) Healesville Joel who utterly and completely steal the show. Xzannjah especially could easily hold her own amongst the bigger stars of Hollywood. She was riveting to watch throughout and I challenge anyone to be able to take their eyes off her. She should be very proud of her achievement here as she pulled off an Oscar-worthy debut performance and the rest of the audience and I agreed as we gave her a standing ovation.

I actually hope that MR. PIP is one of the bigger successes of TIFF this year as I was truly affected by it, and I'd easily vote it as one of the best so far this year. Hopefully this comes out wide in release as I feel it's a very important film and we need to take stock of the things we take for granted in Western society and how it affect the world. Get out and see this film!
Posted by GunMetalBlue at 7:32 PM