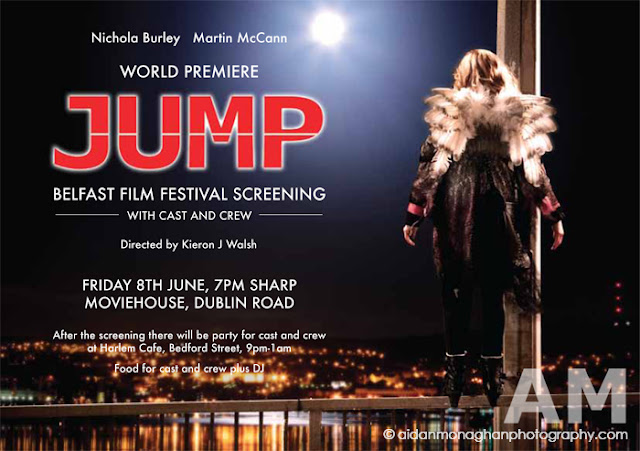 It’s New Year’s Eve in Derry, Northern Ireland, but amidst the joyously drunken revellers parading through the streets, some seriously shady business is brewing.

Kieron J. Walsh's JUMP is assembled a bit like an Irish version of GO, with multiple connected stories told in a non-linear way over the course of one night. Only instead of Vegas it's Derry, Northern Ireland, and instead of just a random night, it's New Years Eve. The addendum I ought to add is that where GO is over-the-top, garish, Hollywoodish and rather unbelievable, JUMP is realistic, funny and sombre in equal measure, well told and basically a better overall film.

Immediately what jumps out from the film (<---see what I did there?) is the poetic beginning in which after a short narrative speech from the lead Greta about how New Years simply sucks (the night when people think things will change the next day, it's too tough to get a cab after midnight) and basically it's a piss poor night when people drink too much and end up regretting the fact that at the end of that countdown is...nothing. We go back and see what the night held for all involved whom she introduces one by one.

The tale is wrought of robbery, sex, violence, death, humor and despair. But what shines through is the humanity. Where films like GO and others like this done in America the crazy messed up stuff that happens is part and parcel of the narrative which normally doesn't stop to analyze and just paces along ignoring that say someone died. In JUMP the characters have an emotional center that causes them to stop and think about these events, the music will hit sombre notes and the character will be forced to realistically wonder on the effects of any given crazyness no matter how small.

At that emotional core of the film are Greta (Nichola Burley) daughter of a mobster and a stranger named Pearse (Martin McCann) whose brother had been murdered by one of the mobster's henchman. It's one of those bitter sweet meetings in which you really just want things to work out. Two people's lives that have been irreparably damaged by those around them through no fault at all of their own, and how in finding one another there is a tangible happiness in the distance.

The film is about making mistakes, and making choices. It's about how moving forward isn't always about looking back or holding grudges. It also really is about how much New Years can suck and is just another day.

Sweet, poignant and very funny JUMP is a great film that should entertain the masses well. It's quieter than a Hollywood film, but therein lies its charm. Not bombastic or sporting a big star cast, JUMP succeeds in telling a smallish, but important story about love, loss, betrayal, and destiny.

Acted, directed, edited and scored very well it's definitely one you ought to go out and see. I quite enjoyed it and will certainly go out and look for it when it comes to DVD and BluRay (unless it gets a theatrical release here in North America in which case I'll go see it again).

Posted by GunMetalBlue at 4:06 PM