Doctor Who: Series 7, Episode 4, The Power Of Three (Review) 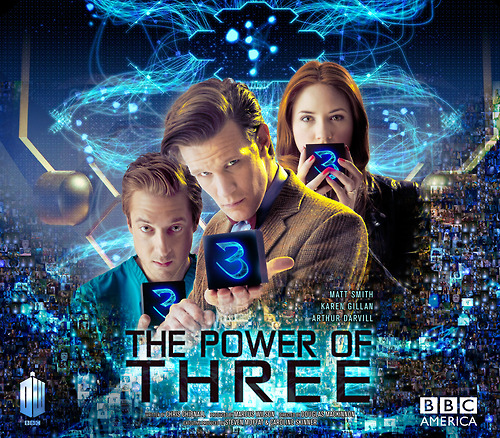 I'm going to start this week’s review of DOCTOR WHO by listing the things I liked. Why? Because there was a lot I either was so-so on, or outright bothered by, so let’s start with nice stuff.

THE POWER OF THREE (Things I liked)

-The nod to Brigadier Lethbridge-Stewart, in positioning his daughter Kate as the new head of UNIT, was a lovely, lovely touch.

-Amy and the Doctor’s serious and heartfelt chat on the banks of the Thames was poignant and allowed Smith and Gillan to show how they interact best.

-Brian had two solid moments in the episode. One was when he asked the Doctor what happened to his past companions. The second was near the end when he convinced Amy and Rory to accompany the Doctor on another adventure.

THE POWER OF THREE (The rest of my opinion)

I always used to complain that A GOOD MAN GOES TO WAR was the biggest scatterbrained, kitchen sink episode in Moffat’s tenure as showrunner. I take that back now. Chris Chibnall (the writer of tonight's ep. Note: he also penned DINOSAURS ON A SPACESHIP) has successfully stolen that crown. And what’s funnier is that everything happens in this episode at the exact same time as nothing. It’s kind of an aggravating episode to watch actually.

Let’s break it down.

We have the Ponds (acting a little un-Pondish) trying to decide between their real lives and their traveling lives with the Doctor. I don’t like this aspect of the plot as I feel that the Ponds (Amy especially) have used the Doctor for adventure in the past, but when he needs them they start to question whether they want to stop or not to just live human lives? Blah. Rose, Martha, Donna, Jack, Mickey, Sarah Jane, and any of the one offs always expressed interest in “staying with him forever”. Even when their family and friends missed them they didn’t stop. Now I know this is KIND of rectified in the ending of the Ep and Rory’s dad’s speech...but it still felt as if we spent a whole episode watching the Ponds be uncharacteristically selfish.

Rory’s Dad Brian is given the most pointless busy work of any companion’s family yet. He is asked to watch his cube. So he does so for nigh on a year (even videoing the thing when he sleeps and reviewing the tapes)...but the cubes all come to life at once (and only for 47 minutes) so I ask the writer what was the point of having Brian watch it all that time (I’m serious, for 20 minutes we keep flipping back to see Brian watching this thing)? I’ll tell you what the point was, they wanted to have Brian in the episode for other moments, but could not think of anything for him to do in the time while they were away and the world waited the year for the cubes to activate. That’s bad writing IMHO. Luckily, like I said above he is given two bits of dialogue that make his time on the episode worthwhile. But I mean come on, at least RTD had Jackie Tyler DOING stuff if she was on any given ep.

The villains. The cubes VIA alien boogeyman custodians bent on eradicating the human race before they reach the stars, seeing them as a plague. Okay, for one: the Doctor views them as a bedtime story told to keep young Gallifreyans in line, and two: they apparently exist somewhere out of time as well as in all of time too. Right. Good. But the Doctor has already seen humanity reach the stars in NuWho, Examples: THE WATERS OF MARS, the 4th Great and Bountiful Human Empire, and any number of classic eps. So why on earth does this worry him at all? Surely if he wasn’t concerned that Amy and Rory’s baby would turn out okay because the evidence (River Song) was right in front of him (S6), then why would he fear these custodial universe police when he knows very well humanity reaches the stars? Oh and where the hell is the Shadow Proclamation or the Judoon in all this? The whole episode is one giant plot hole in the established mythos and canon of the series. And that aggravated me to no end. But let’s ignore that for a second and imagine that part doesn’t bother me. What happens to solve this horrific quelling of humanity Via cardiac arrests? Well a quick wave the Sonic on board the alien ship at the control panel should reverse things nicely. Yep. Wow, that was...easy don’t you think?

It never felt like anyone important was in peril, and UNIT was CRIMINALLY treated. Other than the lovely nod to Lethbridge-Stewart, UNIT themselves are given terribly dodgy dialogue, have little to really do, and wear no red berets. At least the winged logo is present (if only visible in one scene). Sadly, when you compare this to the very BEST use of UNIT in NuWho (easily THE PLANET OF THE DEAD with fan favourite Malcolm! How many Bernard’s is that?) or even the moderately dodgy use of them in the Sontaran eps from Martha’s Series...it’s just SO pale in comparison that it stands out a mile. A weak shot at fanboy nostalgia that falls on deaf ears to real supporters of UNIT in DW.

All in all the WEAKEST ep of the Series by far. I found myself bored in the first 20 minutes which was mostly filler and bizarre disconnected exposition scenes, and then I found myself entertained but annoyed by content and execution of the latter half of the ep. So yeah, probably the most scatterbrained and ill-conceived ep of DW this Series. Chibnall seems to always have these great ideas, but I rarely see him with the chops to properly set them out, let alone execute them with any verve or interest. I mean a slow invasion by little black cubes could have been SO cool, and VERY Day Of The Triffids-esque. And instead we get something that is just this side of the Manhattan Daleks episode.

The credit sequence continues to experience crazyness. Again darker, this time with violent purple colours as well and scattered bolts of that crazy lightning breaking into the time vortex...the mystery continues and keeps me intrigued!

Really looking forward to next week’s ep for three reasons.

1. The Weeping Angels in NY!

2. The Ponds FINALLY say farewell (I won’t miss them too much if I am honest)

3. Hopefully a trailer for the Christmas ep with Jenna Louise-Coleman’s full proper intro to DW as companion!
Posted by GunMetalBlue at 6:36 PM

Email ThisBlogThis!Share to TwitterShare to FacebookShare to Pinterest
Labels: Chris Chibnall, Doctor Who, episode 4, series 7, the power of three