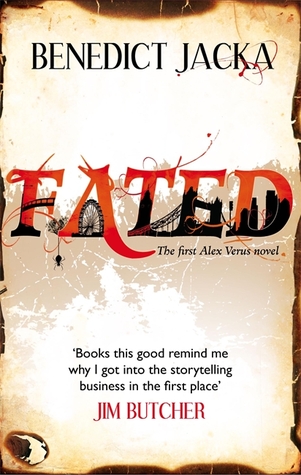 Alex Verus is part of a world hidden in plain sight, running a magic shop in London. And while Alex's own powers aren't as showy as some mages, he does have the advantage of foreseeing the possible future--allowing him to pull off operations that have a million-to-one-chance of success.

But when Alex is approached by multiple factions to crack open a relic from a long-ago mage war, he knows that whatever's inside must be beyond powerful. And thanks to his abilities, Alex can predict that by taking the job, his odds of survival are about to go from slim to none

Jim Butcher, Mike Carey, Ben Aaronovich, Kevin Hearne, Kate Griffin, Myke Cole and Christopher Farnsworth. These are a few of the names writing urban fantasy that I’ve been recently enjoying. As I’ve stated countless times before urban fantasy is either a go-to obsessive read for me or an exercise in tedium. Which one it is usually depends on the author. The above-named author’s fall into the category of Obsessive go-to read. Finding these diamonds in the rough can be daunting, and has resulted in my reading of more than a few UF stinkers.

Luckily, along came a few reviews of Benedict Jacka’s new series about British diviner mage Alex Verus. Most of those reviews seem to indicate that this is a series with some serious entertainment value.

Rest assured, it does have that.

Verus is a lead you can get behind. He’s as sarcastic as Harry Dresden is (there is even an in-book nod to Butcher’s Chicago-based Wizard), with a similar repertoire of pop-culture references, but he also is a creation all his own. Once you settle into his POV, you won’t be disappointed to follow him around.

The world-building in the first book FATED is top notch, with an almost immediate immersion into Verus’ world and the society he belongs to of the supernatural and magery. It is clear from page one that the world has been around a long time, there were once wars that we’ve long forgotten about, and there are even relics from that time which are wholly sought after. Imagine, if you will a peek into the history of Harry Potter’s Ministry of Magic. A delving into that specific magical history. That’s partially what you get in FATED’s world-building, and Jacka doesn’t hold back on informing the reader about Verus’ world. Does this always work? No, not always. In the beginning of the book there is a tad too much info-dumping going on and it stands out a bit. But as the book goes on and Jacka finds himself more at ease with the way to reveal his world, then it’s much more enthralling with the info dropping at better moments and not in large clumps.

The periphery characters are nicely fleshed out, with the cursed Luna being the most easily acceptable (not to mention intriguing with her specific curse) to the reader. The quasi-villains (Cinder, Khazaad and Rachel), and the grey characters whose motivations we can’t guess at first (Levistus) are done with attention to detail. You also get a giant talking spider, and an airheaded air elemental for the bargain. I don’t know that they are all fleshed out quite as much as they could be, but since this is the 1st book in a series I am fully giving Jacka a pass in that department.

With Verus being on the less powerful (or is he?) side of mage powers, with him only really being able to see various futures and paths, it makes for an interesting narrative choice since he spends a lot of time running and hiding. In contrast to Dresden who goes out of his way to seek out fights, Verus instead is highly sought after and is attempting to keep a lower profile. Now, for my money this ability needs to build in future books to the point where Verus can perfect his magic and be able to get ahead of opponents. I await to see how Jacka plays that particular hand.

There are about two or three major action sequences in the book and while they aren’t perfect (as they tend to be a bit abrupt), they are certainly entertaining and break up the expository chapters well. It’s a short book so not oodles happens, but the finale is really nicely written, if not altogether unpredictable. In fact I think my biggest gripe with FATED would be that I was able to guess pretty much all the major twists before they occurred. That took away a BIT of the tension for me. But it’s not something unfixable, and hopefully it’s something that Jacka can improve down the line.

A really, solid, fun and adventurous urban fantasy book, with an expansive and intricate world and a wonderfully wry protagonist who isn’t all-powerful. FATED should be on any reading list that includes the likes of Jim Butcher or Mike Carey, and since he was just signed to a further 2 books in the series (there are 3 out now FATED, CURSED and TAKEN) you can be sure he’s going to be around a while. I’m hoping for an Alex Verus meeting with Harry Dresden down the line, but that may be fanboy wishery.

Either way, give this one a look. It’s a blast to read.

NOTE: The cover image I've used is the UK cover, because I like it way better than the cover we got here in Canada.
Posted by GunMetalBlue at 9:20 AM