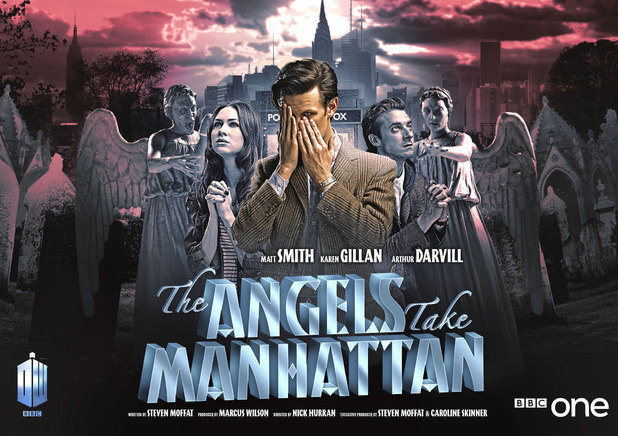 After watching the mid-series finale of DOCTOR WHO (THE ANGELS TAKE MANHATTAN) I find myself wanting to be congratulatory and kind to Steven Moffat’s written swan song for the Ponds, but I’m just too conflicted. So I’m going to lay out what I liked and what I didn’t like and why, and hopefully you can make up your own minds.

The story on the outside is pretty simple. The Doctor, Amy, and Rory visit New York City, and while sitting in Central Park and Rory goes off to get some drinks, the Doctor discovers that Amy is reading a pulpy detective novel that all of the sudden features Rory in the 1930’s and River Song. The novel ends up being a kind of future history of the events that will follow and the Doctor quickly scolds Amy for reading ahead as she’s technically creating “fixed” points in time by doing so. He tells her not to read ahead...but chapter titles might be okay. It’s not long before they sort out that Rory has been touched by the nefarious Weeping Angels and sent back in time. After sorting that out and establishing that going back to save him is too tough because New York of 1938 is so time-addled that they can’t get back there. Luckily River Song is there to establish a homing beacon to follow back to 1938 with the TARDIS. What follows is a progression of events that lead to the heroes finding out that a tenement building called “Winters Quay” is being used as a sort of battery farm for the Weeping Angels to send people back in time from to drink their energy, including the metal (not stone) Statue Of Liberty.

Was it a good episode? Yes, indeed. Does it require Kleenex as promised? Yes it does. But afterwards when you begin to actually think about the ending you will most likely get annoyed. Especially in comparison with heartbreakers like Rose’s goodbye in DOOMSDAY and Donna’s goodbye in JOURNEY’S END, Amy and Rory’s goodbye is treated almost like a “we have to do this, so here you go. It doesn’t make sense, but it’s sad enough.” And that felt flat to me. It’s got a number of decent ideas and scenes and has some kickass DOCTOR WHO moments, but it never adds up to a solid whole. Again falling victim to Moffat’s trademark cobbling of a narrative AROUND his own clever plot devices instead of writing a half decent story first and then adding in his plot devices after. I’m actually a little pissed off by how this happened.

Nick Hurran’s direction and Murray Gold’s score ought to be lauded as both were spot on in this ep. Hurran’s direction really does hearken to 1930’s noir in a perfect way and Gold’s score as usual these days, was lovingly rendered and presented throughout. The acting was also quite well done throughout with Matt Smith (the Doctor’s) performance standing out most. Karen Gillan (Amy) brings home a solid performance, while Alex Kingston (River) does a decent enough job, but for me she’s never reached the heights she did in her first appearance in the library eps.

Is it a solid mid-series finale? Yeah, if you can handwavium the absolute MYRIAD of things wrong with the notions in it and add the fact that the Angels don’t come across remotely as frightening as they did in S5 (let alone BLINK)...at least the Cherubs were creepy and did a lot with sound only. You will likely enjoy it. I did. It was only after I thought about it that everything really began to leap out at me. Is it a solid ending for Amy and Rory? No. Not remotely. In fact it’s probably one of the weakest “companion(s) leave” episode in relaunched DW. I’ll add the fact that we spent two eps with Rory’s dad Brian and he gets no info on what happened to them? How about Amy’s parents? Their many friends? There is liiterally NO EPILOGUE explaining anything to anyone. This robs the episode of a further set of emotional beats that I think the audience deserved, especially Brian. Why spend two eps with him if he was only going to be left in the dark? Travesty.

So yeah. That’s where I am with it. I enjoyed it on some level, but more of me is upset at how nonsensical it was, how scatterbrained and how I feel that even the emotional moments end up not really being earned. When Rose left I cried. When Donna left I sobbed like an un-consoled kid. Now when Amy and Rory leave I shed a tear or two when during the graveyard scene and the epilogue scene, but felt utterly robbed afterwards.

This just further illustrates to me how much RTD’s era affected me. He knew characters and interaction. He paid attention to story first and plot after. Moffat’s continued failure in that department leaves us with stuff like this. Serviceable DOCTOR WHO, but it’s a far cry from what it was and what it COULD be.
Posted by GunMetalBlue at 1:50 PM