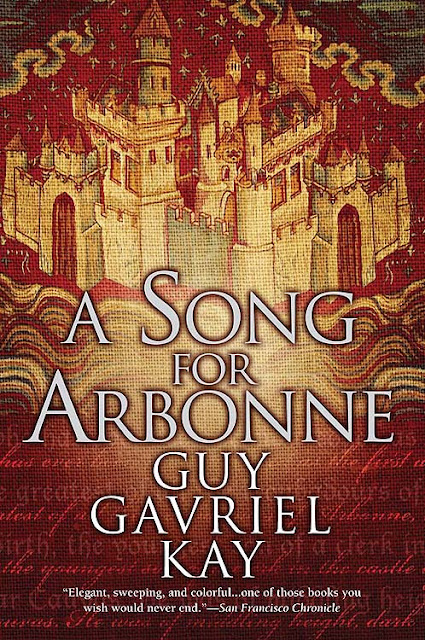 Arbonne and Gorhaut—two lands as different as the sun and the shadowed moon.
In the south, the olive trees and vineyards of Arbonne flourish, as the troubadours fill the air with the music of love and desire. To the north, the history of Gorhaut has been forged with blood and fire, and now a degenerate king and his ruthless advisor seek to quench a thirst for conquest by sweeping down upon Arbonne. But the land of courtly love is also a land of passion, willing to wage a complex and cunning fight to survive.
Inspired by the glorious world of the troubadours, A Song for Arbonne is Guy Gavriel Kay's love song to medieval Provence.
My experience with Guy Gavriel Kay is limited. My first experience with him was with the lackluster Ysabel (which I know ties into his earlier fantasy trilogy), and it not only didn’t resonate with me, but it actually annoyed me. I also tried his THE SARANTINE MOSAIC duology, and that one, while better, still didn’t resonate with me.

Then someone I trust told me to read THE LIONS Of AL-RASSAN, and my initial reaction was. No way! I’ve read this guy and I didn’t care much for what I read.

Well one day I relented, as I am wont to do, and picked up LIONS and about two days later I was finished and had a new-found respect for GGK. LIONS is a phenomenal read, and so I later on picked up A SONG FOR ARBONNE.

On my first go the tonal shift between LIONS and ARBONNE was jarring enough that I put the book down for months. It wasn’t until a week or so ago that I picked it back up and gave in to it fully. And I began to enjoy it.

Blaise is the most interesting character in the narrative (which is good because he’s the main protagonist) and his relationship with his family, his new friends and the country of Arbonne in general is one of continually shifting loyalties and growth on a personal level. If you have trouble getting into the book, begin with Blaise. Now that’s not to take anything away from the other main characters, like renowned troubadour Bertrand de Talair, or the young singer Lisseut and her joglar friends, Arianne and her Court Of Love, or the ruler of Arbonne, the powerful and wise Signe de Barbetain. It’s a scattered cast list but each and every one of them comes into their own for long enough periods that you have a shot at immersion. The world building is quite good, with both the religious and military factions being tied to one another. And like LIONS knowing that Arbonne has a real life counterpart (Medieval France) helps you really get into it.

His prose however is lovingly detailed and every sentence sings with description without become overbearing. He turns a phrase like a classical composer and I always found myself marveling at his skill in that regard. This is not an easy book to read, as it is very loquacious and GGK delights in metaphor and a bit of navelgazing. It’s complex, but well worth it in the end as he really does make each specific event have all the more weight to it for his writing.

This book is quite a volume about love. Is there sex in it? Sure, there is. There is also lust and even some depravity, but above all that rises some of the best passages about actual love that I can recall reading. One character will profess an oath to another, their voice will roughen with emotion and as a reader you will feel it. It’s palpable. It’s very hard to write this kind of love and actually have it avoid sounding corny and clichéd, but GGK pulls it off with ease and seems born to it. Now, that said I think the love story in LIONS is executed better, but ARBONNE is a great example of the learning road in which his writing improved. If there are song lyrics in a book (AKA someone is singing) I usually gloss over those, but her I read every word. There is one midway thorough the book that is about war and it’s so entirely heartfelt that I think I may have gotten misty. That’s kind of unheard of with written lyrics for me, so I really have to give credit.

In the end I truly enjoyed my time with ARBONNE, and though I would notch LIONS higher on the MUST-READ list, this volume is a wonderfully unique tale of love, politics, and intrigue. So this is the second book I’ve enjoyed by the author and I will next be reading either TIGANA or I may re-try the Sarantine Mosaic. At any rate, this is definitely an author to check out and read.
Posted by GunMetalBlue at 7:43 AM