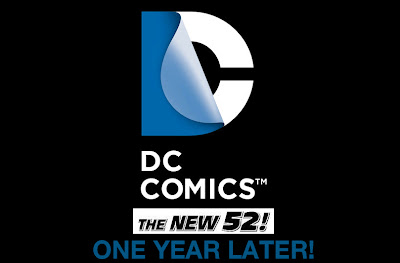 When the nu52 was announced I was skeptical. It didn’t seem possible to me that anyone would jettison nearly 80 years of character continuity in the hopes of reinvigorating their flagging product line. And the stakes here were astronomical, dicking around with beloved characters that generations of fans had grown up with and were invested in emotionally.

Even when the first couple issues rolled out in the back of my head I still couldn’t tell if this was a permanent change or an extended ‘What If’ scenario meant to temporarily goose sales. When some of the fringe titles folded due to a lack of readership I was busy stirring the tea leaves for signs the whole enterprise was going to go belly up.

But now, a full year on, it’s clear that the nu52 isn’t just a one off it’s a sustained attempt to reinvent and refresh a property and a company that had become used to a certain way of doing business and needed a sustained shakeup to help it see outside the box. The end results haven’t always been successful, or even pretty, but the entire exercise has produced more than a handful of pleasant surprises and its worth highlighting them here today. 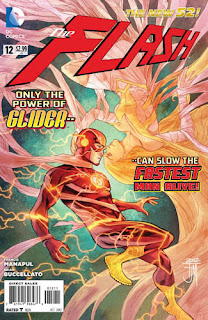 Six months ago I would have given this award to BATWOMAN. But unfortunately that title has a practice of subbing off superstar J.H. Williams III with an accomplished but ultimately lesser artist after every arc. This break in tone and style has the unfortunate side effect of making it feel like any non-Williams-centric story telling is also a story that readers can afford to pass up.
Meanwhile FLASH artist and co-writer Frances Manapul continually manages to elevate his writing and his artwork, blending the manner in which he tells stories with his distinctive artwork. The end result is a finished product that manages to up its game each and every issue. Not all the decision making here is pure gold but the book’s playful mixture of the old and new as well as an increasing ability in scripting the series puts FLASH out at the head of the pack.

(Almost) no more late books. Nothing sucks more than having to wait months between installments of a series that has captured your imagination. By completely revamping their business model and guaranteeing readers that the titles they love will show up every month, no matter what, they reinforce a social contract with their readership and increase the stability of their product line.
Yes, fill-in artists can be painful to watch sometimes, but no less so than losing interest in a story because the creative team behind it can’t manage to put a book out in a timely fashion. 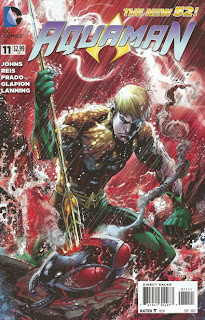 Although the success of Geoff Johns reclamation projects really shouldn’t be a surprise anymore I don’t think anyone thought even he could raise Arthur Curry to the heights he currently enjoys.
Unfortunately, the downside to this tale is that with Johns about to leave this title its almost a guarantee that AQUAMAN will once again be the butt of fanboy jokes.

While there are many capable writers lending their chops to the nu52 Morrison continues to outshine them all. Yes, his ACTION COMICS doesn’t manage to reinvent the wheel in the way that other writers have managed but still manages to be a notable force in defining the look and feel of the nu52. And Morrison’s work on BATMAN INC, his final coda on what makes Batman tick, should be required reading for all fans. 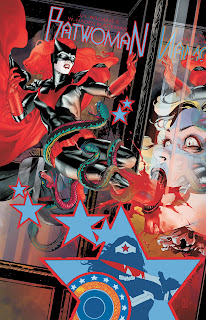 Even though he’s only doing half the issues of other nu52 artists his personal style and vision leaves all other comers playing catchup.


Title That Lost Its Way: THE AUTHORITY, I mean STORMWATCH 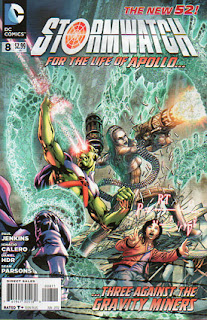 Originally billed as being a sort of secret Watchmen in space kind of thing the title has suffered from creator turnover and a seeming lack of direction. Absent the distinctive tone and vision of THE AUTHORITY and seemingly unable to make its mark in the crowded nu52, STORMWATCH is one of those titles that just kind of is. I suspect it retains many of its readers due to the novelty of seeing The Authority playing about in the DC proper. But, without a clear vision about what this title is really about it remains the poster child for missed opportunities.


What a difference a year makes. Chris and I made a post about 6 months ago about how we thought DC Comics whole New 52 was faring, and gave some of our choices for the best things going. Those choices have probably modified some more seeing as most of the titles that started last fall are now nearing issue 12-13-ish and the narratives have mostly moved past their initial set-up tales and are into the full on storytelling mode. So let’s not waste more time on pleasantries and get into the nitty gritty of what Chris and I are reading in the New 52 and why. 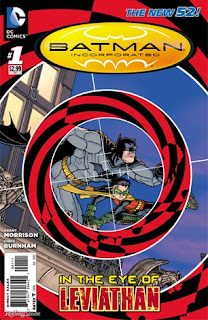 For constant readability, this one is definitely Grant Morrison and Chris Burnham on BATMAN INC., whilst doing the proper Morrison things on the titles (AKA throwing curve balls, making us squirm, and generally just delivering solid, solid storytelling), the title swings them out of the park with each issue. I wasn't too sure how on board for the title I was after LEVIATHAN STRIKES dropped last year (it was good, but not great), but the first 3 issues of the ongoing have alleviated those concerns and the narrative has taken off. The bonus being that Burnham's pencils are very similar to Frank Quitely's in style and execution. I always enjoy reading this book. 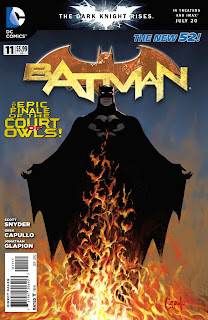 This is easily Scott Snyder and Greg Capullo’s BATMAN. The first arc, including the crossover event THE COURT OF OWLS, succeeded in not only making Batman compelling but really runs him through the ringer, and that always serves to make the end result of Batman coming back from such treatment that much harder and faster. The finale to the arc is nothing sort of brilliant and made me just sit there and smile after I read it. 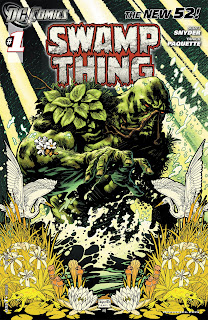 DC needs to thank their lucky stars that they got a hold of Scott Snyder talents. His writing is some of the best I’ve seen in comics in many years (whose name isn’t Grant Morrison). And that’s why Snyder and Yannick Paquette’s run on SWAMP THING is my biggest surprise. I didn’t get into it until the trade for the first 7 issues came out. Titled RAISE DEM BONES, the opening arc introducing us to Alec Holland, Abigail Arcane, the Parliament of The Trees, and the Rot…is more spectacular than I could ever feasibly give it credit. It is compelling, clever, stunningly drawn and ends on a line of dialogue that made me pump my fist in the air. I really think Snyder’s two strengths are internal monologue, and delivering really, solid, kick ass dialogue moments. Read this one folks. Seriously.

For the reasons I noted above, which I won’t reiterate here. 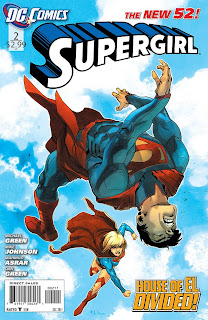 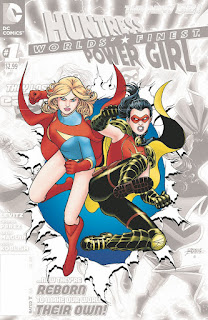 This one is a bit of a toss up for me. So I’m going to set it as a tie. Mahmud Asrar’s work on one of my fave New 52 titles (SUPERGIRL) has been so consistently excellent for me. It’s aesthetically pleasing as well as being clever. And then there is Kevin Maguire’s work on WORLD’S FINEST in which he’s sharing the penciling duties with George Pérez (who handles the modern sequences), Maguire’s pencils (used for sequences that take place in the past on Earth 2) are gorgeous, clean and just wonderful to behold in each issue. His cover for the WORLD’S FINEST Zero issue is wonderful. 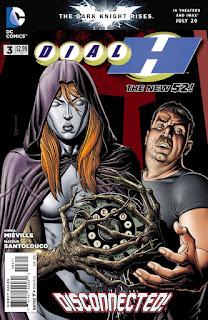 For me this one is DIAL H by new weird author China Miéville (whose prose novels I enjoy), it didn’t even start till 6 months back as a replacement title. It’s strange and interestingly written, but I really think it wants to be too many things at once, and even at 2 issues into the run I could tell that it was going to be a dogs breakfast. What’s sad about that is that I can see the little gleaming’s of what Miéville is striving for, but it never quite gets there.


Final Thoughts on the whole New 52:

As a vehement detractor initially of the whole reboot-everything idea that was the New 52 when it was reported last summer by DC as their plans going forward, I have since softened my position considerably. In fact at 6 months in I was ready to call it a success, so a year down the line I am just as on side with what DC has done. Part of this has to do with my own scattered history with the publisher. When starting into comics I straddled the Big 2 (Marvel and DC) equally and read a myriad of stuff from both, so my education in the long history of the DC universe was…sketchy at best. The DC New has allowed me to discover things other people already know for the first time. It has allowed me to (for example) learn the SWAMP THING history without having to read 12 trades from Alan Moore’s era and get into the character. It has allowed me to get even more fully versed in the events in the universe. Classic villains that I was unaware of are being used and introduced. In FLASH I am able to see all the things that make that character sing to fans who have known those things for a long time. The added bonus here for long time readers already immersed in the mythos, is that enough is being changed to make it fresh for them not to lose interest in what is essentially a rebooting of the universe they already knew. So on the whole I feel it is succeeding. No late books and consistent output is key to that, but I can honestly say that I am collecting more titles now from the comic store each Wednesday, than I have been in many long years.
Posted by GunMetalBlue at 11:39 AM