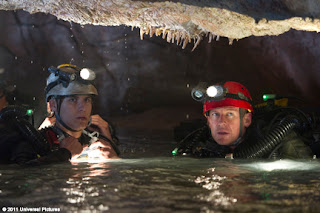 If you think SANCTUM is a film about a bunch of cavers\explorers\adventurers\Hollywood b-listers trapped in a series of underwater caves you'd be dead wrong.

The film's chief preoccupation is convincing you what a hard ass caver-in-chief Richard Roxborough’s character Frank McGuire is. And he's not afraid to tell you repeatedly by barking ferociously at every character unfortunate enough to wander in front of his line of sight.

Even though the film is more action adventure than anything else it follows strict horror movie rules, picking off its cast characters in an easy to predict sequence. (All the while reinforcing the film’s primary theme, Frank McQuire a god damn hardass.)

But despite all that nonsense SANCTUM is a very good film.  It does a great job at using its enclosed and claustrophobic locales to great genuine moments of queasiness and fear. And when the film does shift gears into smaller character moments it does so without pandering to the cloying treacly sweetness that often accompanies those beats. If the film suffers slightly from an unfortunate sense of predictability its execution is second to none.