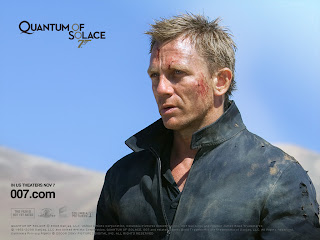 As good as CASINO ROYALE is, it’s not until the Bond films hits QUANTUM OF SOLACE that you realize how far the franchise has moved from the depths of camp and satire that had permeated its skin and rotted out its bones.

James Bond has been fleshed out from just a wise cracking, smooth talking brit spy. Now he has motivation and hidden depths and you start to wonder if maybe those endless martinis are indicative of a larger problem than just maintaining a playboy lifestyle.

And the whole visual look and structure of the films have changed as well. They've injected flashes of art and directorly auterism into Bond's perpetual smarmy grin. Suddenly the flashy teenager has grown up and realized that its substance that audiences want and not just endless adolescent hijinks.

My greatest concern is that the series will regress, that gradually more and more of the comic elements will be reinserted back into the franchise as individual directors try and recreate the Bond of their youth.

My hope is that the brains behind the franchise can keep the nu real world aesthetic of the films going long enough that it becomes the default tone of the films.