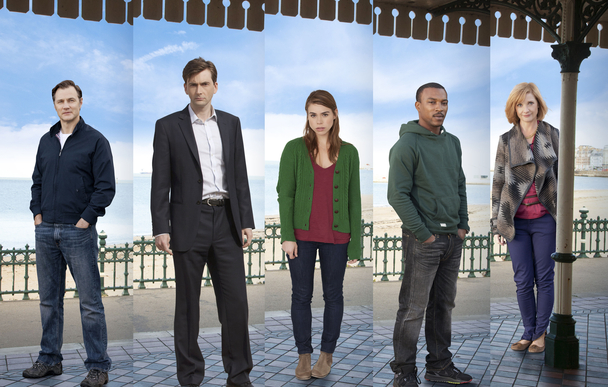 A while back it was announced that a number of DOCTOR WHO alum as well as some other currently hot British thespians would be on a new 5-epsiode show called TRUE LOVE on the BBC. The most notable of these was the news that David Tennant and Billie Piper would be sort of reunited in their first show together since 2009’s DOCTOR WHO: THE END OF TIME PII. When I say “sort of” that’s because TRUE LOVE would take place in the same seaside town and though there would be minor links between episodes, each one would concern a different set of characters and stories and as such Tennant and Piper weren’t in the same episode, but would be on the same show. They would not interact. Still, being a giant fan of both actors I went in with open arms to the show…and sadly, found it VERY wanting.

First off, I think it should be noted that up front the show is apparently improved dialogue-wise, in what one can only assume was an attempt to make the characters ring truer to real-life conversations. While an admirable idea on paper, this falls entirely flat in execution in a two-pronged fail. The first thing wrong with it is that unless you have your TV cranked to ear-piercing levels it is incredibly difficult to hear what is being said half the time since sentences trail off into mumbles. The second issue is that in this attempt to sound like real-life dialogue with all the uncomfortable pauses and the like, the whole thing ends up actually coming off much more falsely than well-scripted dialogue would have.

The second thing I noted is that this show is about what I have termed “un-pretty love”, in that the majority of the eps are about cheating on ones spouse for one reason or another.

Note, spoilers for the first two episodes from here on out.


In Tennant’s episode, his character Nick who is happily married with two teen kids cheats on his wife with an old love who comes to town to basically stalk him. Great... It’s one of those moments in a TV show when you think, ”Who’s side am I meant to be on?" Clearly Nick is the protagonist, and yet if we side with anyone, we side with his wife Ruth (played by DOWNTON ABBEY’S Joanne Froggat) who get’s about 4 minutes of total screen time, so that makes little sense. Nick as a character is fairly reprehensible since he ruthlessly cheats and easily lies to his loving wife. Then the episode ends with him not able to run away with his first love (as they'd planned) and ends up staying with his wife. It’s unsatisfying to say the least as a half hour of TV, and then you add in the factor that since each of the five episodes will be about different sets of characters you know that the ultimate resolution between Nick and Ruth (who seems to be more than aware of what transpired) will never be seen. So what we are left with is a disappointing and ultimately depressing tableau of infidelity with zero redeeming qualities. Nor am I even sure why I was told this particular tale.


The second episode concerned Paul, another town resident who is wedded (in a somewhat stale marriage) to Michelle and they have a young child together. Michelle is too involved in the day to day grind with her homemaker life and their child to excite Paul and he himself is bored by his own day to day grind at his job at the carpet store, which seemingly eats away it him. Until one day he sees a blonde at the bus stop and begins to share furtive looks with her, and this culminates in him leaving her a note in chalk on the ground to meet him…at which point he…guess. Go ahead and guess what happens next. That’s right, they go to her place and he cheats. He cheats multiple times with her while progressively getting more belligerent with his wife about their boring life at home. Well, this sketchy blonde ends up asking him for money to save her ailing mother, and of course he gives her a cheque for Five Thousand Pounds and off she goes with the promise to call him when she gets to her mums, and of course she never does and has swindled him out of most of his savings. At this point my girlfriend rolled her eyes at me as we were watching and I agreed with that sentiment. So this second story of adultery tacks on a hackneyed sick mother con onto the end of the tale. It’s totally and utterly predictable in the worst way. And what’s even worse is that when I began to actually think that PERHAPS…just PERHAPS the resolution of the story might be Paul, realizing his mistake, growing up and being a man and might think to start WORKING on his flagging marriage…turns into him leaving his wife anyway because he was having his affair…and even after she screams at him to get out when he confesses the infidelity, she relents as he packs and asks him not to leave not wanting to sacrifice their marriage to this indiscretion…and he STILL LEAVES. This almost makes Paul even more reprehensible than Nick was, and the only saving grace was that at least he actually had the stones to admit to his wife he’d cheated. But again, the episode ended and I thought to myself, “Who am I meant to side with here?" And sadly I can’t even side with Michelle since her sister Serena was the visiting “first love” of Nick in the first ep whom he cheated with and she is irredeemable in ep 2 because it was her convincing Nick to cheat to make her sister happy.” So I felt almost less connected here.

We stopped at episode two deciding that the show had no really redeeming qualities and was not remotely entertaining on nay level. We MIGHT watch episode three since it’s Billie Piper’s episode, but I don’t even want to really do that since I’m sure it will be but more of the same. What struck me most here is that last years Post-DW David Tennant show SINGLE FATHER, while very difficult to stomach and watch, since it also actually concerns some very unsettling things about “love”, the end result was far more endearing and made sense. In four episodes it was a complete story and served a purpose. In comparison, TRUE LOVE is an absolute joke. It’s disconnected, convoluted, predictable, nasty, irredeemable and even pretty incompetent as a TV show. People don’t watch TV to see snippets of uncomfortable real life, that aren’t cohesive into a proper narrative. People watch TV to be entertained. And while it is okay to entertain with stories that are not the easiest things to watch, it is certainly not okay to present a premise and not only not bring it to a proper conclusion, but also to not even TELL the story in a good way. We don’t need to love the protagonist, but if we don’t like them who can we relate to? And in that same vein if we aren't going to get the whole story, why are we being told it to begin with?

I’m not sure what writer/director Dominic Savage was aiming for here, but if he was aiming for the least decent, least effective show about LOVE ever, then he’s hit the nail right on the head. Perhaps that’s the point of it and perhaps I therefore missed it. I can’t say beyond what I saw and how I perceived it. If I were a betting man though I’d wager that Savage likes his drama to be brutal, unrelenting and bleak. And that is NOT TV that I wish to watch in my spare time.

PLEASE NOTE: None of these issues stem at all from the actors involved. Tennant, Froggat, Walters, McLure ect. all do as good a job as they can with the material they have been given and even do an admirable job at the improv of the dialogue, and I want it known that my issues with this show stem entirely from Savage's writing and directing.

In short, there is nothing to “love” in TRUE LOVE, and in fact the show would be more aptly titled “Unrepentant Cheaters” or “Irredeemable Idiots”. Terrible. Just avoid it.
Posted by GunMetalBlue at 7:43 AM