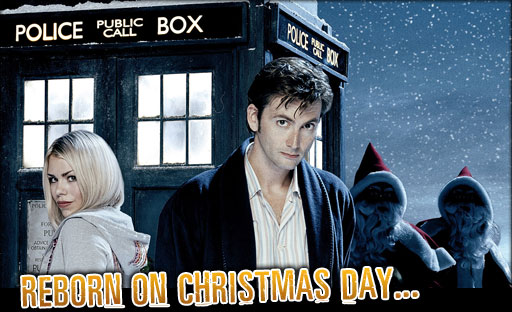 Ah THE CHRISTMAS INVASION, thou art a weird duck. The first episode of Series 2, the first full episode with David Tennant in the lead as the 10th Doctor is quite good. But it’s still an odd duck since it’s technically what will come to be called a Doctor-lite episode down the line.

Sidenote: Doctor-lite: These are episodes that existed during the tight shooting schedule when David and Billie or down the road Freema or Catherine would be shooting other episodes and the need to get done more shooting in less time was high (this is info I’ve gleaned from Russell T. Davies book A WRITER’S TALE, which is a must-read if you are at all interested in the behind the scenes of the show) so they would craft an episode that only marginally included the Doctor (prime examples are BLINK, and LOVE & MONSTERS).

THE CHRISTMAS INVASION is a different type of this because it wasn’t a scheduling conflict that made it be Doctor-lite but rather the fact that the violent and taxing process of the 9th Doctor’s regeneration into the 10th Doctor had left the Time Lord bedridden and unconscious for the majority of the running time.

Where the episode benefits from this most is in the fact that Rose Tyler, her mum Jackie and her boyfriend Mickey Smith get a chance to really shine front and center solving a large part of the mystery in the narrative (this time an invasion of the Sycorax) on their own before the Doctor even wakes up.

Let’s get the plot out of the way, which for a Christmas Special is serviceable, if one of the more lackluster ones from the stellar Series 2. While the Doctor is convalescing, Rose and Mickey go Christmas shopping, only to be attacked by Santa robots! When they escape home the Doctor briefly wakes only to defeat the robots and mention it’s the residual regeneration energy that is drawing the things to him. Prime Minister Harriet Jones (whom you’ll all recall became Prime Minister after the incident with the Slitheen in Series 1) has sent a probe into space to Mars, but little known to her it has been gobbled up by the Sycorax warship on its way to earth to invade. The Sycorax arrive and hypnotize people all over London to position themselves on the tops of buildings with the threat that they will make the humans jump if those in charge don’t surrender half the human population to the aliens to become their slaves. This plotline slowly gets undone by the discovery that all the hypnotized humans have the same blood type (that of the type that was on the probe the ship gobbled up), and the eventual moving of the Doctor to the TARDIS where he finally wakes. Upon learning of the plot, the Doctor challenges the Sycorax leader to a swordfight (in borrowed pajama’s yet!) where he subsequently loses his hand. Being so close to the tail end of his regeneration though the hand grows back, and the Doctor is able to vanquish the leader in the confusion. Pretty standard stuff, but not at all unpalatable either. Decent and entertaining, if kind of a prologue to the rest of the Series.

Like I said above though, the spot where this ep shines best is with Rose and Co. All three of them spend a lot of time trying to come to terms with the regeneration, since the idea of it is so alien to them as humans. This person seems to be the same on some levels, but on most others including his looks he is also quite different.  There is a CORE that makes him a Time Lord and some very specific rules he follows, but otherwise all bets are off. The 9th Doctor is gone and in his place is a stranger. Compound this with the adoration that Rose had already begun to have for the 9th Doctor, this further complicates her own feelings. Imagine falling for someone only to have them change their face and parts of their personality. It would be bizarre to say the very least. Both Jackie and Mickey have an equally difficult time with it, but naturally on a different level than Rose. I think Jackie's reaction is probably the funniest (though that's usually the case with Camille Coduri's spot on delivery of lines) since she is truly baffled by this turn of events. I’ve always maintained that this is one of the areas where Matt Smith’s 11th Doctor missed a bit of a boat as he was freshly introduced to Amy Pond without her having known him before. I like the fact that companions have to deal with regeneration like Rose & Co. do here, and it hearkens back to Adric, Nyssa and Tegan having to see the 4th Doctor regenerate into the 5th, and again later when Peri watched the 5th regenerate into the 6th at the end of the CAVES OF THE ANDROZANI.

Now, it’s no secret that David Tennant is my favourite Doctor. I'm a card carrying, die-hard, flag waving, David Tennant fan. He likely always will be, and so THE CHRISTMAS INVASION holds a special place in my heart as his proper introduction, but there is a part of me that wishes he was in it more. That said, his scenes in the finale are very good and you can see where he is headed as the Doctor. Over the next few eps he will begin to solidify both his final look (with hair all “sticky uppy” as Wilfred Mott would call it later), his mannerisms and his personality, but in this ep he gets his wardrobe (Brown and Blue suits, plus Chuck Taylors and a long brown coat) which would become so iconic that I have personally cosplayed as him twice.

Next Time: We get more meat with the latest Doctor when he and Rose visit a future New York in NEW EARTH.

Posted by GunMetalBlue at 5:52 AM