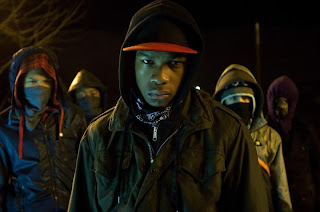 By the time you get to the third act you realize the central thrust of BLOCK is that it uses an invading horde of sexually frustrated aliens as a metaphor for gang violence.
Pretty heady stuff for a film that’s ostensibly an hour and a half of teenagers running around an apartment complex bludgeoning misfit toys from the Jim Henson workshop.
BLOCK is fun, frothy and strangely not afraid of dispatching those same teens in a fairly graphic manner.
Oh, and if you think that there’s a world of difference between Brits and Canucks, despite our shared history and language, wait til you see the film’s portrayal of low income London. The thick accents and heavy use of slang really do make it seem otherworldly to all us folks hunkered down here in the colonies.