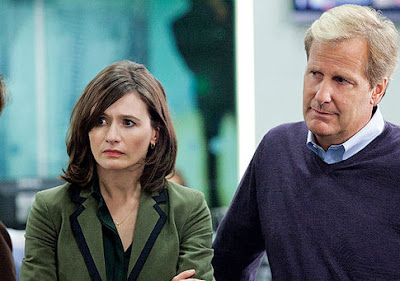 More than once in the premiere episode of THE NEWSROOM a character equates  the fanciful notion of a new cast where the focus is on telling the news right and not being beholden to the corporate interests of giant multinationals to Don Quixote and his perpetual assault on implacable windmills.

The truth, we’re told, is a luxury in this day and age and only the mad and the marginalized have any business pursuing it.

THE NEWSROOM works best when it’s tilting angrily at windmills and less so when it decides to remember that it’s also a television drama and it should incorporate a love interest or two in order to please all comers.

It’s loud, brash, clumsy and not terribly subtle. It reads like a freshman year Politics and the Media class, where characters serve as expositional info dumps, giving primers on  “This is the way things work” all wrapped up in that immediately identifiable Sorkin-esque dialogue.

Characters and story are twisted and bent in order to serve the high god of politico-proselytization and everything else is secondary.

The show works best when it’s trying to pass itself off as a pseudo-documentary of sorts. The verite trappings give a drive and immediacy to the show that pulls the viewer along. When NEWSROOM switches gears and drops in some more familiar dramatic trappings, trying to catch up emotional me alongside cerebral me, the dissonance caused by the contradictory aims spoils the pacing of the whole affair.

Aaron Sorkin has clearly dressed THE NEWSROOM in a fine suit of unfettered opinions and beliefs. Like NETWORK, a similarly Quixotesque journalism genre piece he’s mad as hell and not about to take it anymore. By positioning the show’s ‘hero’ to the right of the middle he’s scuttling the critique that he’s using the show to espouse any one political ideology. THE NEWSROOM is not about determining the moral superiority of any particular ideology, It’s about respecting the intelligence and opinions of the viewers and challenging the political divide to raise the level of their discourse to something more than the angry shouting of floating heads on your evening newscast.

THE NEWSROOM is in turn a declaration of principles and a yearning for a way of reporting news that might exist only in theory or in musty old textbooks. It’s an idealistic  throwing down of the gauntlet that refuses to be happy with the broken status quo.