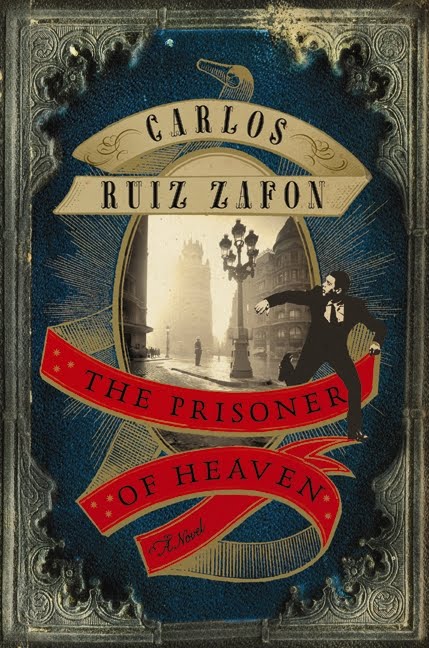 Barcelona, 1957. It is Christmas, and Daniel Sempere and his wife, Bea, have much to celebrate. They have a beautiful new baby son named JuliÁn, and their close friend FermÍn Romero de Torres is about to be wed. But their joy is eclipsed when a mysterious stranger visits the Sempere bookshop and threatens to divulge a terrible secret that has been buried for two decades in the city’s dark past. His appearance plunges FermÍn and Daniel into a dangerous adventure that will take them back to the 1940s and the early days of Franco's dictatorship. The terrifying events of that time launch them on a search for the truth that will put into peril everything they love and ultimately transform their lives.

Even though it’s been a while since I first read THE SHADOW OF THE WIND I still remember the story pretty much as if I’d read it yesterday. THE ANGEL’S GAME, second book in Spanish author Carlos Ruiz Zafon’s “Cemetery Of Forgotten Books” series, I recall less clearly because it was much darker and only seemed tentatively linked to the first book. What’s most telling, and one of the key spots in which PRISONER succeeds is in the fact that when I first read THE ANGEL’S GAME I thought it was good, if very dark but that it just didn’t quite seem to be up to the standard SHADOW set. PRISONER actually changes that status quo, and it makes me desire a re-read of THE ANGEL’S GAME since this one puts a LOT of the story elements in that strange 2nd book into a whole new light and makes it a MUCH better book if you can believe that. It’s hard to explain without spoiling anything, but THE PRISONER OF HEAVEN made me appreciate THE ANGEL’S GAME much, much more.

Well the 3rd book in the sequence, titled THE PRISONER OF HEAVEN, is like a lost connection between the two books. It’s as if when writing both his first two books he purposely left out small key points and elements that we really didn’t notice when they were passing. Sentences that seemed like random worldbuilding back then, all of the sudden become powerful steel links between both SHADOW and ANGEL’S in THE PRISONER OF HEAVEN. It got to the point that as I was reading the 3rd book and things were slotting into place my jaw kept dropping.

This book, like the two before it, is once again a past and present book. We pick things up not long after the conclusion of SHADOW with Daniel married to Bea and raising their young son Julían in 1957. It’s Christmas and at the Sempere bookshop sales are flagging a bit. Sempere Senior ends up with an idea for a nativity scene in the front window to attract customers in an attempt to make ends meet. The illustrious former vagabond and Daniel’s best friend, Fermín Romero De Torres, is soon to marry his love Bernarda but seems more and more down in the dumps each day closer to the nuptials he gets. Daniel only has a scant amount of time to wonder before a nefarious looking older man comes into the store, purchases the most expensive book in the store (a leather-bound copy of THE COUNT OF MONTE CRISTO by Dumas) for 1000 Pesetas, writes an inscription in the front cover and leaves it for Fermín with a cryptic message. I won’t get into any further plot here as the very last thing one should do when reviewing a gothic thriller is to give away the plot.

The only thing I’ll say is that this book will open a window onto the previously unknown past of our favourite character Fermín, and every bit of it is as interesting as everything that’s come before in the series.

Something I wasn’t sure was possible is that we actually get to see growth in Daniel here, and while it is not the type of growth I expected to see, it was welcome from a character standpoint. The same is of course true for Fermín, and I think it’s the tale of the youthful vagabond that makes this book totally shine. Are there other mysteries at play? Yes, but Fermín has always been such a phenomenally realized character with so many hidden winks and nudges that you can’t possibly be anything but enthralled by his backstory.

Divided into 5 Parts, the narrative is shorter than the other two books (clocking in at a mere 280 pages or so), and if I had a complaint about the book it would be that I wished there were more to read. But that is from an addictive fan standpoint, as the story told in the pages is perfectly represented and cleanly told. The prose is sweeping and the gothic style Zafon is known for is present and accounted for, which I believe is part of the charm. These books are as much about the prose itself as they are about the tale. Zafon turns a sentence like a pro and you simply cannot help but get lost in the pages. Like the previous installments, he uses Barcelona as a character in its own right, with grand vistas, rambling streets, dark and foreboding mansions and bustling café’s and restaurants. I think if I ever go to Barcelona I’ll probably have at least a decent idea how to get around.

Once again, Zafon has delivered an absolutely riveting gothic mystery that will have you turning the pages like wildfire. Nothing is stilted and the narrative time shifts are always well placed and never jarring. In fact, at one point while one story was being told in the past and a chapter ended I thought to myself “Oh, I’d like to hear the present day reaction to that!” and the very next chapter the time shifted forward to the present to do exactly that. An intuitive and entirely immersive read THE PRISONER OF HEAVEN sits proudly on the shelf next to its brethren. Considering the first book in the series is the one I consider my all time favourite book ever, succeeding it in the series and impressing is a tall order. That said, I really do stand by what I said at the top of the post. This book is the missing links between both the 1st and 2nd books, while tying into the 3rd and it is also a wholly fantastic standalone story in its own right.

Gripping from the outset, if you enjoyed Zafon’s previous two installments then this one will almost be cream on the top of the already delicious desert. Carlos Ruiz Zafon is a master storyteller and now I patiently begin the wait to the next book in the series.
Posted by GunMetalBlue at 6:22 AM

Email ThisBlogThis!Share to TwitterShare to FacebookShare to Pinterest
Labels: book review, carlos ruiz zafon, shadow of the wind, the angel's game, the cemetery of forgotten books, the prisoner of heaven