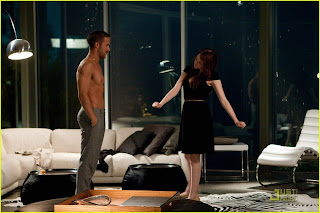 Romantic comedy don’t get a lot of play from me. And it’s not just the subject matter or the well-worn jokes and character clichés.
Rather it’s because the endings in romantic comedies are primarily a binary proposition.
a)      The more popular “They overcome life’s obstacles and get\stay together, reaffirming the power of love."
b)      Or the lesser used “They realize that they’re not right for each other and that true love’s kiss is stapled to the bottom of some other poor sap’s face.”
Admittedly LOVE does better than most, jamming several different types of rom-com (coming of age\mid-life crisis\opposites attract) into a single vehicle. The diversity of narrative plot lines handily papering over some of the overly familiar genre motifs.
And there’s a VERY well done surprise twist that is never alluded to at any point in the film’s buildup and pays off of a great deal of the very patient ground work LOVE laid down earlier in the movie.
But it’s still a rom-com and while LOVE is willing to play a little bit with its structure its never able to break free of the genre trap that birthed it.