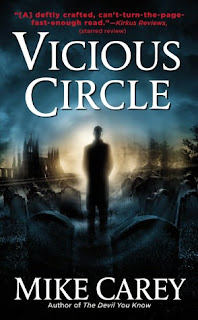 Castor has reluctantly returned to exorcism after the case of the Bonnington Archive ghost convinced him that he really can do some good with his abilities ('good', of course, being a relative term when dealing with the undead). But his friend, Rafi, is still possessed; the succubus, Ajulutsikael (Juliet to her friends), still technically has a contract on him; and he's still - let's not beat around the bush - dirt poor. Doing some consulting for the local constabulary helps pay the bills, but Castor needs a big, private job to really fill the hole in his overdraft. That's what he needs. What he gets, good fortune and Castor not being on speaking terms, is a seemingly insignificant 'missing ghost' case that inexorably drags himself and his loved ones into the middle of a horrific plot to raise one of Hell's fiercest demons. And when Satanists, sacrifice farms, stolen spirits and possessed churches all appear on the same police report, the name of Felix Castor can't be too far behind ...

Felix Castor is in good company. At least in my head.

When it comes to urban/supernatural fantasy books, everyone knows that Harry Dresden is my go-to lead character. Butcher’s Dresden Files are some of my favourite comfort reads. Well, British author Mike Carey’s protagonist, Exorcist Felix Castor, would be welcome right beside Dresden…again, in my head.

I read the first of Carey’s Castor books a while back. Titled THE DEVIL YOU KNOW, you can read my review HERE. I enjoyed the read and found it a fair bit bleaker and spookier than your average urban fantasy, and then I noticed something special. After I finished it, I went hunting for the second book in the series. Sadly, book stores in Canada are notorious for not stocking even British author’s well (unless they are J.K. Rowling), which is a separate rant which I’ve mentioned often, and I could not easily find it.

Yes, I could have added it to any random Amazon.ca order, but I always forgot to do so when I was ordering books from the site…I really ought to write things down.

A few weeks back, my GF and I were going on a short weekend away to Boston, and maybe it was the recent watching of the brilliant BBC series LUTHER that made me want to read an urban fantasy next…but my brain finally clicked. I checked the Barnes & Noble website (this is the American book store chain, for those who don’t know) and found that they had a copy of the 2nd Castor book VICIOUS CIRCLE at a mall in Boston. So when we got there I made sure to pick it up.

Boy am I glad I did! Carey really does the 1st person POV well, and Castor’s second adventure/case/torment is a doozy. The cops use him for chasing down perps, his friend Rafi is still possessed by a nasty (possibly the nastiest) demon named Asmodeus and the Doctor’s where he is kept are threatening to throw him out, his apprentice is a soul sucking/eating succubus who he can’t stop desiring, there are people around London committing atrocious acts of violence the likes of which they never would normally do, and Castor’s zombie friend is on edge and looking to kill him. Did I miss anything? Hopefully not. And that’s just the first 50 pages or so. Funnily enough, Castor is approached by a couple who want him to find their lost/kidnapped daughter Abbie…and there is only one problem with that, she’s dead and they want him to find her ghost.

Seriously, this book is so fast paced you might get whiplash. Carey is very adept at keeping the story clicking along and he keeps the myriad of plot points in the air while they slowly coalesce and make more sense as things go forward. My instinct is to name the prose enjoyable and workmanlike, but I feel that last description is unfair. Since Carey seems to have an uncanny knack of finding interesting ways of working things and crafting sentences that are only disguised as workmanlike and would better belong in an English Lit class taught by Alan Moore or Warren Ellis.

Castor is hard not to like. He almost always makes the right choice, and you can definitely get on side with him for it…and when that “right” choice goes flying off the rails as the wrong one, you feel it right in your gut when the punch comes. That’s a great character in my humble opinion. That’s not to say the supporting cast aren’t great, with Pen (his pagan friend), Juliet (his gorgeous succubus apprentice) and Rafi (his demonically possessed friend) filling out the main cast frightfully well. I don’t want to be unfair though as there are some character’s that are only introduced in this story that are quite compelling as well. A rival exorcist of considerable power named Dennis Peace, a couple of Were-thugs who work for an enigmatic, ancient and excommunicated religious order, and even Castor’s priestly brother Matthew makes a few appearances.

I’m not going to tell you what happens. That would be silly, and besides which you will want to take this journey yourself. It is, in turns action-packed, mysterious, gruesome, emotional and quite heroic. It solves a few notions from the first book, and opens up a few more mysteries. It puts the reader on a more solid footing as to the world that’s been built by Carey with a much more in depth look at the London that Castor works in and how the society uses exorcists now like they would a private detective. It explains what that means for the humans who live in the city, the cops who work to keep it safe, and the nasties that seek to destroy it. Most of all, it fleshes out Felix Castor in a lot more detail, right down to his familial roots and issues, and his near fatherly instincts (another trait he shares with Dresden).

Should you read Mike Carey’s Felix Castor books? That depends. Do you like fantastic urban fantasy or supernatural books? Yes, of course you should read these books! They are fast, compelling reads that will keep you company on a long train ride, a warm summer night on the patio, or even curled up in your bed before you sleep. Carey has made a stalwart protagonist who is a joy to tag along with, a world that is both realistic and fantastical, a dastardly set of villains as well as a few grayer than gray types as well. In fact, I would wager that he has created a (if not THE) series he will be known for (since he is also known for the standalone LUCIFER graphic novel series based off the Lucifer character from Neil Gaiman’s SANDMAN) and he has made it stand out amongst the overwhelming masses of Urban fantasy out there.
Posted by GunMetalBlue at 10:18 AM