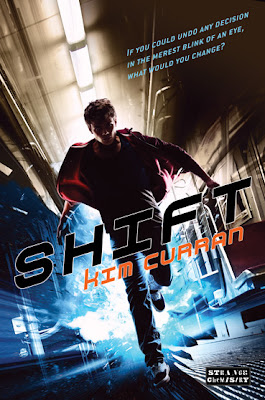 When your average, 16-year old loser, Scott Tyler, meets the beautiful and mysterious Aubrey Jones, he learns he’s not so average after all. He’s a ‘Shifter’. And that means he has the power to undo any decision he’s ever made. At first, he thinks the power to shift is pretty cool. But as his world quickly starts to unravel around him he realises that each time he uses his power, it has consequences; terrible unforeseen consequences. Shifting is going to get him killed. In a world where everything can change with a thought, Scott has to decide where he stands.

I love it when debut authors succeed out of the gate and craft such great reads! It’s probably one of the most enjoyable things about reviewing books in fact. The feeling I get when I read a first time authors’ book and I’m enjoying it is always one of “Yes! Well, you did it. You can breathe now. This was awesome.”

I just finished freshly minted author Kim Curran’s debut Young Adult novel SHIFT. Some of you may know Amanda (formerly of the blog review site called Floor to Ceiling Books), and how she is now an editor for Angry Robot’s new YA Imprint Strange Chemistry. Well it was Amanda who found Kim and her novel SHIFT and decided we all just might like it. Well, I am here to attest that yes indeed, she chose well.

SHIFT first and foremost to me is about youth and choice (obviously), and what’s interesting here is that Kim has put her protagonist Scott (great name that…) Tyler directly into the fire. He barely gets a chance to hang out with his friend, be indoctrinated into the cool crowd, and have those first panging’s of youthful desire before the wheels come flying off. Within a few chapters Scott is educated about “choice” and just what it is he can do with his new Shifting powers. He’s understandably baffled, intrigued, and damned scared from the outset of this revelation. His initiation into the Shifter way of life is VIA Aubrey who works for an arm of the government that has managed Shifter’s for over 150 years called ARES. Through a series of events Scott quickly realizes that all is not as it seems, every choice he makes can lead to really bad things, and most especially there are now people who want him caught or dead.

Blogger's Note: I’m of course not giving away any more of the plot to you, you will need to read the book yourself when it comes out to find out what happens.

Kim’s prose is easy, and fast. It has a paced ebb and flow while still being realistic to the teenager vibe of speech and thought, which can be erratic at the best of times. So when it is called for Scott can reference popular culture like any teen would. Kim has also found the balance that IS the male teenage psyche. Basically, she’s intuitive to the fact that young men (if there is a girl around) will automatically be thinking about how jealous they are of the guy standing next to her, or how much they’d like to kiss her…while the villain is rankly breathing down their neck. Priorities of teenage boys might be a tad out of whack. Kim gets that, and it ended up on the page. That brought realism to the character that I found quite refreshing. On the whole, I never found ANY of the young cast of characters rang falsely, and never found a moment where I groaned in disbelief. They were fleshed out well (especially for a 300 page book), and they act exactly as you might expect them to. One of the things I noticed is how easily Kim could make me care about a newly introduced character past the halfway mark of the book. She would introduce someone new, and I would end up as emotionally invested in him or her as I did the main protagonists. I liked that quite a lot, and it speaks of her skill as a storyteller.

Clever. Sweet gods this book is clever. Within the first 50 pages or so Kim had already touched on Quantum Physics, the double slit experiment, and Schrödinger’s Cat. The integration of Shifting and how it works was pretty seamless and even the most baffled person when it comes to science will be able to get an easy handle on the system. Shifting is intelligently realized and offers up a myriad of potential for storylines. The fighting is especially interesting… since what would you do if you could anticipate and redo moves to top the other guy and brute power reserves is all that matters to win a fight? The science itself throughout is quite sound and researched, and it never gets to the “techno-babble” “info-dump” position a lot of novels find themselves in during the course of explaining. Shifting is complex, but it is also quite easy to get to grips with and that made it fun from the outset.

The world building is quite well executed and is done with a light brush, and I actually love when that happens. We get smatterings of information about the past and how Shifting came about and was regulated and by whom…but I could sense there were a great many things either were known and kept secret, or were yet to be discovered at all. Again, this opens Kim and readers up for a thick backstory down the line that will only fill out the world of SHIFT further, without the need to drown the reader in too many facts. We got enough this time to not overload the book, but there are still tantalizing mysteries dangling for future plumbing.

The pacing is rocket fast. I started it on the way to work yesterday, and when I got home last night I disappeared into the guest room, clicked on the light and read till I was finished it. There is no slowdown in the narrative whatsoever, and there is even a line midway through where Scott says something along the lines of “I won’t bore you with the montage”, and I laughed out loud. What a great line and speaks of an author who knows we didn’t need anything superfluous in the story.

So there it is folks. First time author Kim Curran has crafted a tale that is both realistic and fantastical. A compelling and clever premise that is about as fresh as it gets in a genre that consists of mostly vampires, werewolves, and apocalypses. Here we have a book that more often than not is about choice. Not just about choice as we know it from day to day, but also about the cascade effect and how even the tiniest choices made by one person can affect the world at large. Dealing with that can sometimes be a very raw undertaking and Kim doesn’t shy away from that.

SHIFT is a smart, page-turning thriller of a novel that challenges you to be brave, embrace science and knowledge, but most of all to make the right choices. The protagonists are fallible, yet still heroic and the villains are suitably nasty. The world is both bright with possibility and still dark with the machinations of evil that needs to be kept at bay. Filled with action and adventure, and a significant amount of emotion I really found myself unable to stop reading until I read the final page. SHIFT is the type of debut that Kim should be exceedingly proud of. It has already made me ask her (and she graciously answered) if there were to be more books in the SHIFT world on the way. She told me there indeed were, and that’s great news. I look forward to the next volume in the series with anticipation.

SHIFT will be out in stores in early September 2012.
Posted by GunMetalBlue at 6:57 AM