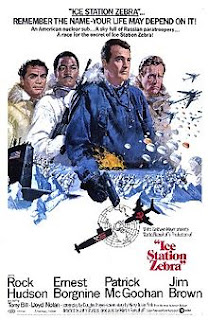 Man, its weird to watch movie these days that have overtures or intermissions in them, such a throwback to old Hollywood filmmaking.
It’s dangerous to critique older movies by the standards of the day. Yes, classics will always be classics and are enjoyable in any era. Unfortunately, there are a whole raft of lesser films that were hits at the time but have translated poorly to modern audiences.
ICE STATION ZEBRA is one of those movies.
If you think over two hours replicating mind-numbingly accurate procedures and regulations aboard a nuclear submarine at the height of the Cold War makes for good watching then this is the film for you. The rest of us have to periodically shake ourselves awake or intentionally misplace the remote in fear that our willpower will be worn down enough that we’ll latch on to that fast forward button like a drowning man in search of a life preserver.
Instead of mining the rich Cold War backdrop for a little tension and drama we’re treated to an endless cast of rugged pretty boy soldier types who talk in hushed monotones about everything from sleeping arrangements to the possibility of World War III.
Much like the Cold War itself, ICE STATION ZEBRA talks a good game but backs down quickly in the face of a potential conflict. Conflict in this case being a code word for pacing, performance, story, conflict or excitement.
There’s lots of other ‘trapped in a sub with something dangerous’ movies out there that do it better and with more panache. Go find one of them instead.