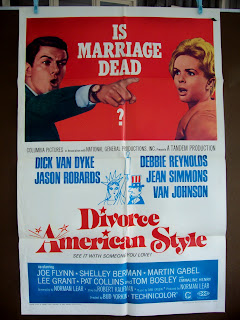 Never heard of it before but decided to take a flyer on it because the info button informed me it was starring that Dick Van Dyke fella that all the ladies raaaave about.

Fun fact: Van Dyke is just so damn watchable he can make even mediocre films feel like they're punching above their weight.

It was a goodish film, but what made it really interesting was how open, honest and tongue-in-cheek it was about a subject that's still somewhat frowned upon today in Conservative Middle America.

We tend to wail and gnash our teeth and proclaim that the modern family is disintegrating and that ‘things aren’t how they used to be’. DIVORCE AMERICAN STYLE puts the lie to that notion, dealing fairly candidly about the topic without bemoaning the end of life as we know it.

Also, Jason Robards and Jean Simmons (no, not a typo) are in this film and they are awesome.