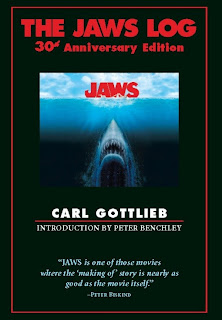 In the wake (hah, self-congratulatory nautical humour there) of JAWS being re-re-released on Blu Ray this summer, I thought I’d mosey on over to my bookshelf and finally get around to reading THE JAWS LOG by Carl Gottlieb.

In many ways JAWS is responsible for a lot of the shape and form of modern movie making. Before JAWS there were no such things as Summer Blockbusters or Tentpole Franchises, at least not as we understand them today.

So with a hefty pedigree like that one weighing on its fishy shoulders its quite natural that in the nearly 40 years since it first hit the theatres fans and film historians alike should paw through its leavings in the hopes of better understanding what the fuss was all about.

Only Carl Gottlieb did it all first.

Gottlieb was co-screenwriter and a bit player on the film and the LOG was written in the direct aftermath of JAWS unprecedented success.

The LOG covers the production history of the film from novelist Peter Benchley’s original idea, to the early pre-production struggles of the filmmakers, right up to the grueling and unpredictable experience of shooting the movie itself.

It’s written in a laid back almost informal diary style. If it happened on the set of JAWS Gottlieb saw it with his own two eyes, or at the very least was able to speak directly to someone else who had. If this book was written today and not in 1975 chances are the material in it would be freely available to everyone as an ongoing production blog or a ‘making of’ featurette on your DVD.

I think the majority of interesting JAWS trivia I’ve heard over the years probably comes from this book. Including…