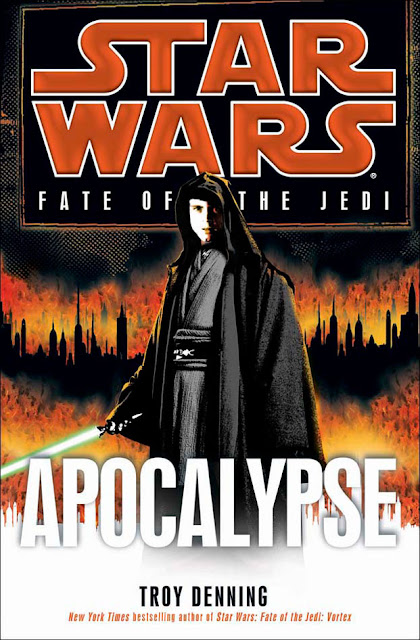 In the stunning finale of the epic Fate of the Jedi series, Jedi and Sith face off—with Coruscant as their battlefield. For the Sith, it’s the chance to restore their dominance over the galaxy that forgot them for so long. For Abeloth, it’s a giant step in her quest to conquer all life everywhere. For Luke Skywalker, it’s a call to arms to eradicate the Sith and their monstrous new master once and for all.

In a planetwide strike, teams of Jedi Knights take the Sith infiltrators by swift and lethal surprise. But victory against the cunning and savage Abeloth, and the terrifying endgame she has planned, is anything but certain. And as Luke, Ben, Han, Leia, Jaina, Jag, and their allies close in, the devastating truth about the dark side incarnate will be exposed—and send shock waves through the Jedi Order, the galaxy, and the Force itself.

STAR WARS Expanded Universe books are fickle creatures for me. Sometimes they suit my mood and other times they don’t. I have mentioned in previous SW Book Reviews that I feel that the 9-book series they’ve done have been mostly long-winded and padded, really affect pacing and the overall narrative. This is to the degree that I actually SKIPPED the 7th and 8th books in the series and jumped straight to the 9th (and final) book, Troy Denning’s STAR WARS FATE OF THE JEDI: APOCALYPSE…and I’m none the worse for it as the things I needed to know I caught up on over at Wookiepedia. Is that a disservice to the other two authors’ of the series? Certainly. Do I feel bad about it? I suppose a little, but whenever I feel that way my brain clicks onto the fact that a quick 10-minute perusal of the synopses of those two books at Wookiepedia told me everything that happened in over 600 pages worth of material. That’s a lot of filler as far as I am concerned, and this series and the LEGACY OF THE FORCE series before it are known for such padding. So I skipped some of it.

This is a terrible way to begin a review for a book I actually loved.

APOCALYPSE was one of the best SW EU books I’ve read in a very long time. Whether that was because of plot threads that were tied up that have been going since the Dark Nest Crisis (2005), or because of the finale-like action set pieces, or simply just because there was a definite feeling of “moving forward” occurring in the pages, I don’t know. All I know is that Denning had me rapt from page one until the closing chapter 440+ pages later.

Note: Beware, as the last book in a 9-book series, this review is going to have some minor-to-heavy spoilers. Unavoidable.

So basically this book wraps up exactly who Abeloth is, and I was a little stunned and impressed to find out how she ties into the overall STAR WARS universe; that she ties into the strangest episode arc of the 3rd season of STAR WARS: THE CLONE WARS where Anakin and Obi-Wan visit a strange world called Mortis where three very powerful force beings (A Father – Balance, A Daughter – Light Side and a Son – Dark Side) live. The Father is dying and asks Anakin to take his place as Balance (who obviously refuses)…it turns out that Abeloth has to do with them, and they have more to do with the Force as a whole than previously thought. Jedi Grand Master Luke recalls hearing the story from Yoda and after checking it out in the Jedi Archives on Coruscant finds the mission his father and Obi-Wan undertook did indeed take place. This also ties into what Jacen Solo (prior to his turn to the dark side and death) found out from the Killik’s who simply referred to these beings by different names, but the mythology was the same of a Son and Daughter at constant war and the father who kept them in balance.

Basically Denning has not only tied this story into the past (and other SW media) with the above points, but also has Jagged Fel and the Imperial Remnant tied into the future as well (the LEGACY comics which take place 137 years ABY), leading me to believe that Jaina and Tahiri may be the first of the future Imperial Knights (Red-Armored Jedi who defend the Fel Emperor)…who knows. Still, it's nice to know that the people behind the curtain at LFL take continuity into things when ideas are raised.

We also finally get the public reveal of Allana Solo as Tenel Ka and Jacen Solo’s daughter (instead of the masquerade as the elder two Solo’s adoptive daughter Amelia) thus making her VERY strong in the Force and Hapan royalty in line for the throne. But naturally she’s also in line for another throne…one of balance. I think it will be very interesting to see a more grown up Allana training as a Jedi and taking up the mantle of hero from her grandparents. Ben and Vestara get an ending I wasn't expecting and it was kind of refreshing since I assumed that they would follow a certain path with their relationship than how it ends up. Which brings me to my last story point, the Jedi have finally (in a council decision) decided that the best thing for the Jedi Order is to separate themselves from the Galactic Alliance and leave Coruscant (for the academy training world of Shedu Maad) to its own devices and political squabbling.  I like that a great deal and see it as a long time coming since the New Republic and the subsequent Galactic Alliance have never fully trusted the Jedi and why would any group stay and defend people who didn’t trust them? I think Luke has the right idea in making the Jedi become a more autonomous entity beholden to no one but themselves. I’m also really ready to return to the Jedi Academy type locale. That was one of my favourite things about the Academy when it was on Yavin 4, that there was nothing else going on there. No political infighting, just Jedi training. Love that. It will be a welcome return to see the new fresh Jedi rise up and become knights and not have to worry about what is going on with the Order.

Denning has done an incredible job wrapping up the plot points that truly needed wrapping up. There are some complaints that there are still open threads left hanging at the end…but then that only means we’ll be seeing more of our friends in future. I don’t mind those open threads, because like anything of this type of story, enough was solved for me personally in the end and it’s always nice to have things to look forward to that connect to the past.

The one thing I am looking forward to the most: The squad of Ten Jedi Knights who are sent out to find the wandering planet of Mortis and hopefully the Force-imbued dagger that can kill a celestial. That’s going to be very Outbound Flight-ish methinks.

If you’ve been reading this series, then APOCALYPSE should satisfy you much more than INVINCIBLE did in the last series. A great book, and definitely one of the best Main-series books I’ve read since the NJO.
Posted by GunMetalBlue at 7:24 AM