Book Review: The Mist In The Mirror - Susan Hill 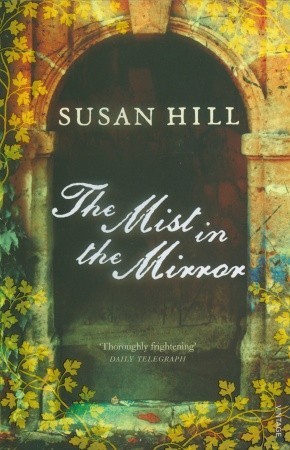 An inveterate traveller, Sir James Monmouth has spent most of his life abroad. He arrives in England on a dark and rainy night with the intention of discovering more, not only about himself but his obsession with Conrad Vane, an explorer. Warned against following his trail, Sir James experiences some extraordinary happenings - who is the mysterious, sad little boy, and the old woman behind the curtain? And why is it that only he hears the chilling scream and the desperate sobbing?

A recent discovery of mine, British author Susan Hill (THE WOMAN IN BLACK) almost immediately became a go-to, must-find-all-her-work person for me. In one of my many trips out to the bookstore I grabbed another gothic story that came from her pen called THE MIST IN THE MIRROR and quite naturally I devoured it in one sitting.

The story follows along a few of the structures that I’d recognized from THE WOMAN IN BLACK, namely an older gentleman relating a story of his younger self in which something vaguely ghostly or supernatural figures prominently. That’s where the comparison ends of course as this story is all its own beast and succeeds in being both eerily spooky and fascinating in equal measure.

Perhaps I ought to elaborate.

The British protagonist (the eldery man who’s story we are reading) Sir James Monmouth, had been orphaned at a very young age, raised abroad in Africa by a Guardian, eventually began to follow a rather famous adventurer named Conrad Vane, and set off about he world to see those amazing sights himself. After returning home to London, he begins to search for clues as to the rest of Vanes life  but uncovers hushed whispers, wry warnings, and basically evil things instead. While this goes on, Monmouth also begins to unravel his own previously unknown familial past and ponders his future as well.

Hill is, as far as I am concerned, an absolute master of gothic storytelling. What goes above and beyond here is that the book is also sometimes populated by decidedly Dickenisan characters, thus lending a further air of quality to the narrative. She knows very well how to craft her story, weaving us from creepy, shivering dread moments to a laughing, daylight ease within sentences. One especially shuddering bit has Monmouth walking about a private college in mid-winter, at four in the morning hearing sounds, seeing shadows and basically being scared out of his wits. Again, as a personal taste I much prefer this type of scary story where a lot of what we perceive is in our heads. I absolutely love disappearing shadows, half-seen faces, and even mist in mirrors. Just like the first book I read by Hill, the pacing here is very near to exquisite. There is an ebb and a flow that radiates out and gently lofts you up and over the narrative. The passages are never jarring, which works best  when she builds to a scary moment, since it’s upon you before you know it and can be truly frightening. I shivered more than once reading this tale.

An added bonus is the use of the narrative-style that is:
We are seeing this through the eyes of both Monmouth (on the base level as this is his manuscript), but that is also being read by a young man from his private club (our nameless narrator). This enables Hill to give us an epilogue for Monmouth’s story, and then one for ours as well. The result of which is ultimately chilling and some of the spookiest stuff I’ve read in ages.


This book is a hot cup of tea on a frosty night. Your toes will shiver and you'll need the blanket tucked in over them, the steam from your cup will waft figures and creatures into the air, and the light will cast ominous shadows on your wall.

I said it before, but if you enjoy this type of frightening ghost story, there is no one better out there currently (that I've read at any rate). Susan Hill’s work is on another level, and she will not only entertain, but will make you as devout a fan as I with only a few pages.
Posted by GunMetalBlue at 9:13 AM

Email ThisBlogThis!Share to TwitterShare to FacebookShare to Pinterest
Labels: Review, susan hill, the mist in the mirror