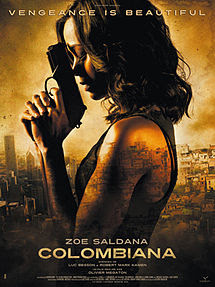 Luc Besson finally got to make a sequel to THE PROFESSIONAL.*

Only this time Natalie Portman's Mathilda grew up to become the equally attractive and lithe Zoe Saldana.

Shot in a high gloss Besson-esque euro style, It’s a fun little story, mucking about in that same child assassin genre, which I think might actually be a thing now, that he broke the mold on over ten years ago.

The movie intersperses teenage 'fuck yeah' moments in between character building setups, so that the adult in me gets to pretend I'm watching the movie for something under than the visually impressive shoot ups.

It is EXACTLY the kind of movie you think it will be and that's all right.

*There’s even a scene where the hero climbs down the inside of a wall to escape the incoming SWAT team for god’s sake.